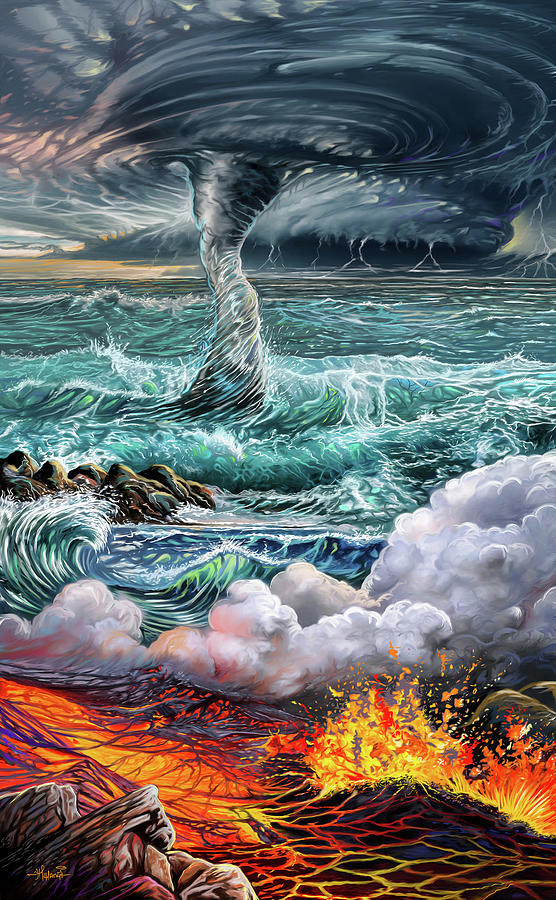 Everything in nature is made up of five basic elements: earth, water, fire, air, and space in which all these elements exist. Sometimes the powers shown by the elements can be so immense that the human family becomes very insignificant before them.

The power of the wind and air are unfathomable! The sheer might of a twister in the sea or on land is simply awe inspiring. The storms of the sea are a sight to behold. Humanity can only look and pray for it to pass!

When the earth opens it volcanic vents, it heats the ocean water without mercy. The meeting of water and hot lava gives birth to hot steam that acts as a balance between the two natural forces!

My painting today is dedicated to the most powerful elements that exist within our home earth and beyond. The chaos of the universe are so immense that it beats all logic that we are still alive.

For me, I can’t help but believe that these elements have been contained and controlled forever by the very hands that created them! While we encounter disasters, we have not come to extinction.

How many times will we be given a warning? Think of the Earth; an awesome machine that moves at a speed of 66,000 miles an hour to make an orbit around the sun in a year, and tilt at just about the right degrees to cause seasons and sustain life in its abundance? Yet we have the guts to think we are special. The earth will vomit humanity and move on. It is the high time it dawned on us that in truth the world would miss the bees if they died off, but really it would flourish if humanity exited. It is a sad revelation.

We just need to respect our home because, the earth could easily eject humanity and never stop for one second to notice.

Thanks Susan, I do appreciate

Anthony, this is outstanding work, congrats on your feature in Our World, saw it there F/L

Congratulations, on ART OF THE WEEK, in Our World Gallery, group!

CONGRATULATIONS, Anthony! This stunning mythic creation is my Art of the Week in the fine art group, Our World Gallery! A true masterpiece! v/f/feature, pin, tw, fb promotion!

Thank you very much for the feature Lenore

I thank you John for the feature

WOW Anthony, one of your best works. Amazing piece of art.

Thanks Hans. I appreciate

Fantastic piece of art! Love this.

A marvelous masterpiece !...dramatically dynamic. It is a powerful illustration of your equally powerful message.