The Death Of Epaminondas 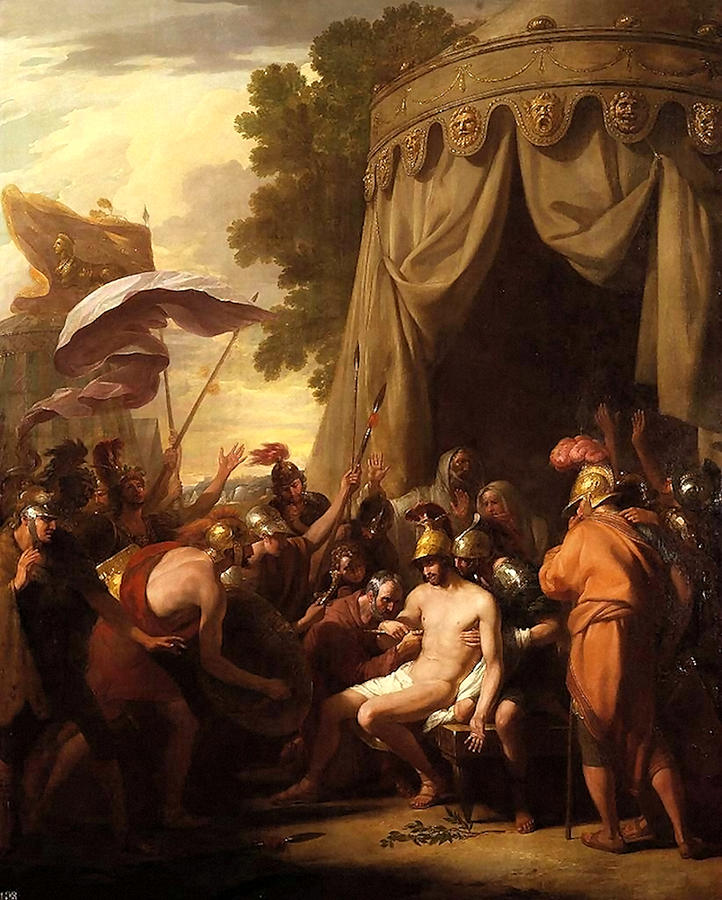 The Death Of Epaminondas

This is a reproduction of “The Death of Epaminondas” of 1773 by Benjamin West. The artist was born in Springfield, Pennsylvania in 1738 and had little formal education. He began painting portraits in Pennsylvania at the age of eight years and ten years later secured a patron who introduced him to other patrons. He became a friend of Benjamin Franklin and his patrons sent him to Italy in 1760 and in Rome he met a number of Neo-classical artists. He arrived in England in 1763 intending a short visit, but never returned to America. West’s arrival in England from Italy in 1763 occurred at a time when artists were seeking to create a distinguished national school of history painting. George III was eager to support such a goal and was also a keen supporter of the proposal to found a national academy for the teaching and display of arts: his patronage of West and the foundation of the Royal Academy in 1768 were closely intertwined. At the King’s instruction, ‘The Departure of Regulus’ was shown at the first Royal Academy exhibition in 1769. He married an American there two years later. He gained further commissions and soon became known as the “American Raphael”. He became the first president of the Royal Academy of Arts. He was appointed historical painter to the court and in 1791 Surveyor of the King’s Pictures. West painted around sixty pictures for George III between 1768 and 1801. From 1772 he was described in Royal Academy catalogues as ‘Historical Painter to the King’ and from 1780 he received an annual stipend from the King of £100. In the 1780s he gave drawing lessons to the Princesses and in 1791 he succeeded Richard Dalton as Surveyor of the King’s Pictures. He succeeded Sir Joshua Reynolds as President of the Royal Academy in 1792. He lost royal patronage in the early Nineteenth Century and began creating religious masterpieces. He had many pupils, American and otherwise, and died in his home in London on March 11, 1820. The American artist Benjamin West established himself as the leading London artist depicting scenes from Classical History after his studies in Italy.

This is one of three pairs of neo-classical history paintings, painted between 1769 and 1773, commissioned by George III to hang in his ‘Warm Room’ (a private sitting room) at Buckingham Palace, along with one modern scene, the ‘Death of Wolfe’. The first commission was placed in February 1768 when West showed the King his picture of Agrippina with the ashes of Germanicus which he had just completed for Robert Hay Drummond, Archbishop of York. This pair, for which West was paid 300 guineas each, seems especially designed to complement the 'Death of Wolfe' of 1771 and deals with the same perennial subject, the exemplary death. West here contrasts an ancient Greek with a Renaissance French hero. Epaminondas was a Theban general who fought with great success for the liberation of his and other city-states from the Spartans. He was taken from the battlefield at Mantinea in 362 BC with a spear-head lodged in his chest, which could not be removed without killing him. We see him in West’s painting enquiring of the outcome of the battle; his companions show him his shield - an emblem of victory because a valiant soldier returns either with it or on it. Sure of this victory he asks that the spear be removed in order that he can die with his work accomplished. Epaminondas sits unclothed outside his tent, surrounded by his followers mostly wearing helmets; a man supports him from behind whilst an older, bearded man pulls the broken spear from his chest; other tents and a military camp in middle and background. This masterpiece is in the Royal Collection Trust in Buckingham Palace. It is an oil on canvas and measures 222.2 by 179.4 centimeters.