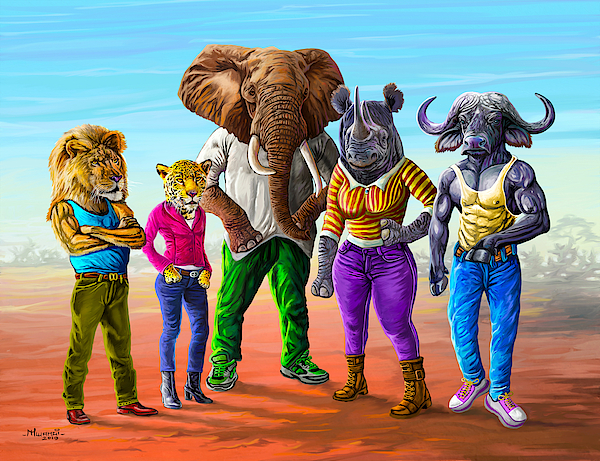 The Big Five game animals are the lion, leopard, rhinoceros, elephant, and Cape buffalo. I don’t want to get into how the name for the five African Animals came about. That I leave for all to do a little search on WWW.

I have always wanted to draw the Big Five like most artists do. I see that the animal heads have been done countless time in so many ways in the past.

When I was toying with the idea of doing these animals to look like people, I was amazed by the fact that this was a very MALE concept from the very beginning. I had drawn Five Animal-Guys at the first try!! I felt that it was unfair to just draw guy Animals.

I am glad I did it this way because it gave me a chance to draw two Animal-Ladies in my painting. The Leopard and the Rhino were the easiest choice for me in this case. I believe others could have chosen different animals for that. One thing though, I feel better when two of these Animals are girls!! Long live Africa’s Big Five!

What a unique concept, executed with exacting expertise !

Congratulations on your feature in the Fine Art America Group "Images That Excite You!" Sharing on FB.

Thank you John for the Feature

Thanks Sunny, I appreciate