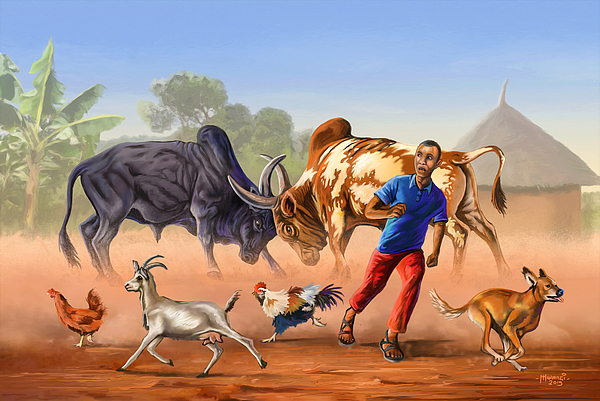 I have many stories to tell. I like doing a painting with a story every now and then. I feel that paintings tied to a story are more intense in the moment of creation because they bear the truth. They are a memory. They are like a file kept for years in the brain.

Among them, the three grandfathers owned about 30 Cows. They had one big shed for all these cows.

As it would happen, they had two huge bulls among all the cows. They used to have tough fights once in a while. In those days I had no clue why these beautiful strong characters fought seasonally; today I do.

One thing I can never forget though is the scene of the fight. These fellows went at it like there was no tomorrow. They would chase each other all of a sudden and blow a lot of dust as they went for each other’s necks (Heads if you like). The sheer power of these two bulls was awe Inspiring. Every living thing would flee from the scene for dear life.

No one could separate them apart from the oldest of the three Grandfathers, Obed. He would just shout their names and swear by their Flesh and they would stop! “YOU TWO! NDEGWA and WANGOMBE! STOP THAT OR I WILL HAVE YOU TWO SLAUGHTERED FOR THE WHOLE VILLAGE TO EAT! And just like that, they would both run off in different directions.

I 'm always amazed by your art, Anthony! Such an artist!!!

Thanks Faye. I do appreciate, always.

Thanks Jim! Long time. I will be coming to your gallery soon!

You are a bull-talker Mwangi and that's a good thing - great tale and great pix! - Brilliant! -;0) VivaChas!

Thanks Chas. I really appreciate you lovely comment! Love it!

The eye-catching interactions in this riveting scene are whimsical and fascinating, Anthony.

Thank you Joel. I am grateful.

I appreciate your kind words Xueping

Than you Jeff. I am very grateful

ANTHONY...LOVE the painting and the backstory!! I love how you captured the story PERFECTLY! I will have to revisit your portfolio more closely for more amazing paintings...” with a story”... l/F

Thanks Laurel. I appreciate very much