The 18th At Pebble Beach 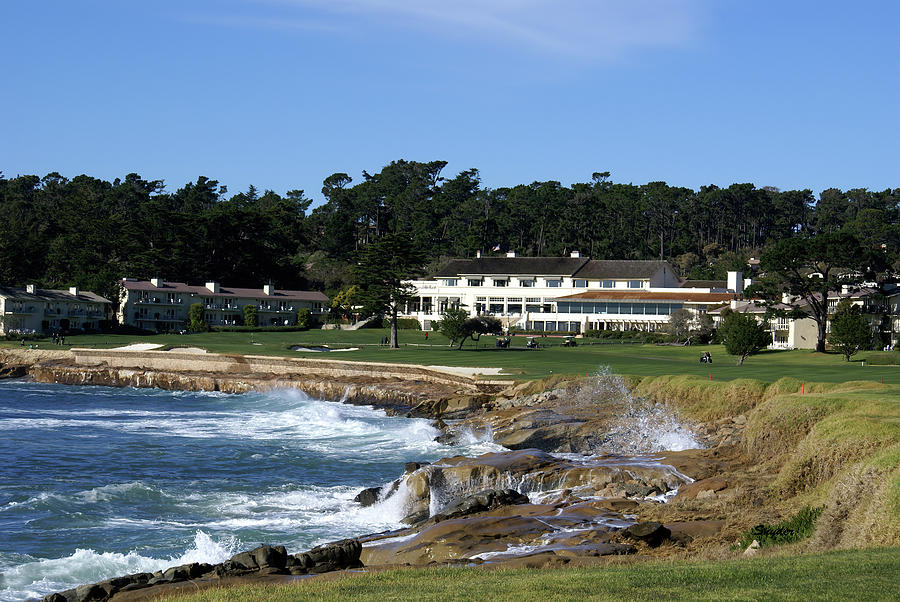 The 18th At Pebble Beach

The 18th At Pebble Beach by Barbara Snyder

This is the view of the clubhouse at Pebble Beach Golf Links that golfers see when standing on the tee at the 18th hole looking straight into the back of the clubhouse. Of course, no one plays the hole to cut across the bay. Not on purpose anyway.

This is one of the most famous golf courses in the world and very often tops the list of Best Courses in the World. It is also the course that most people, worldwide, say they want to play, putting it very high up on a lot of "bucket lists".

Pebble Beach also is the home of one the PGA Tour's most famous, yearly tournaments, the AT&T, Pebble Beach Open and Pro-Am event. The yearly "clam-back" was originally founded and sponsored by the famous crooner of all time, Bing Crosby. Bing, of course, has moved on to greener fairways in a better place bu the legacy continues on as it still draws a star-studded crowd of Hollywood stars and Fortune 500 billionaires.

Bill Murray of Ghost Busters fame is probably the most followed players on the course during the 4-day event were unlike other pro-ams, the celebs actually can qualify to play on and finish with the pros on Sunday.

Pebble Beach is now owned by an organization that includes none other than Carmel By the Sea past mayor and Hollywood giant Clint Eastwood. Clint, now in his 80's no longer plays in the event but he still attends and does live guest commentary on the network broadcast and is usually in the booth for when the trophy is won.

HI, NICE TO MEET YOU ! im Ms, Fanaka Cadassi, 41YRS, separate, liveing in [Turkey]. im just being true to myself and i want real and true love no to waste. in short no time for games. Here's my email address. (fanaka-cadassi@hotmail.com) Please contact me directly.i will send you my pictures. beside there is something very important i will like to tell you when you contact me on my email address here i will respond to you.waiting to hear from you. Fanaka.

Congrats on your sale. Great photo of this classic view.

Thanks Bill! Seems like everyone has at least a few images that just keep selling over and over again compared to the rest. This is one mine. I was there a few days before the AT&T Golf Tournament and the golf course was closed. What a lot of people don't know is there a path from the street that is a public access foot trail and it goes right behind the 18th tee. That path is open all the time except during the Tournament, if I am not mistaken. At least that is what I was told.

Just thought I would mention, if you want to meet people from all over the world, no matter where you travel to, buy this image on a T-Shirt and it will amaze you how many people will tell you, "Hey, I have been there!"