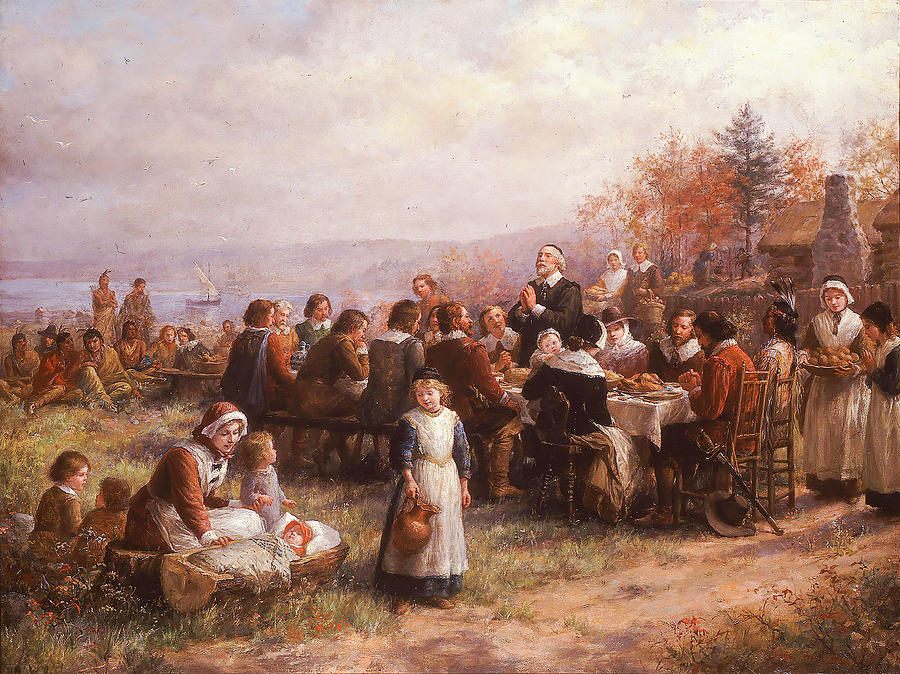 Description: A 1925 recreation of Brownscombe's earlier 1914 painting of the First Thanksgiving at Plymouth, significant in that it omits the Plains Indian headdresses that were criticized as non-historically accurate in her 1914 version.

Jennie Augusta Brownscombe’s paintings of scenes from Colonial American history appealed to her contemporaries, who sought nostalgic escape from the increasing urbanization, industrialization, and immigration around them.

In Thanksgiving at Plymouth, as with other American subjects, Brownscombe strove for historical accuracy, searching out portraits, documents, and other records to ensure the details. Patrons and critics of the day viewed her version of the first Thanksgiving as true to life.

Historical records certainly affirm that the Pilgrims and Wampanoag Indians shared an autumn feast celebrating the colonists’ first successful harvest in 1621. Yet, their gathering would not have resembled Brownscombe’s portrayal—not least because she included anachronistic log cabins and Sioux headdresses. In reality, her representation of the iconic event reflected the idealized version of the story that entered the collective memory of the United States in the last quarter of the 19th century.

The artist was born in a log cabin in rural northeastern Pennsylvania to William Brownscombe, an English-born farmer, and Elvira Kennedy, a direct descendant of a Mayflower passenger. Thus, Brownscombe’s early life was reminiscent of one of her own paintings. When her father died in 1868, Brownscombe began supporting herself through teaching and creating book and magazine illustrations.

Brownscombe also sold the rights to reproduce her watercolor and oil paintings as inexpensive prints, Christmas cards, and calendars. She distributed more than 100 artworks this way, spreading her images into homes nationally. Viewers loved her highly naturalistic style, which included picturesque details that helped them recognize the stories and emotions portrayed.

A prize-winning student at the Cooper Institute School of Design for Women and the National Academy of Design, Brownscombe became a founding member of the Art Students League and later served as faculty. In the 1880s and 1890s, Brownscombe studied art in France, spent winters in Rome, and exhibited in London, New York, Chicago, and Philadelphia. She completed her final large oil painting at age 81 after recovering from a stroke.

Text Credit: National Museum of Women in the Arts