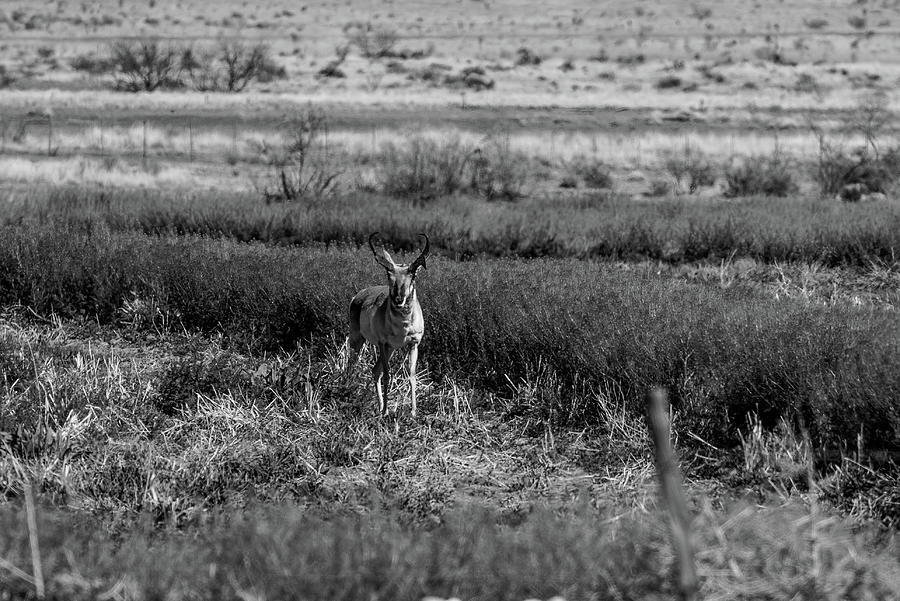 A west Texas pronghorn buck standing in an old field.

Photographed near Marfa TX in Presidio county. Often referred to as an American antelope though it is not kin to antelope at all.

This area of west Texas is home to many types of flora and fauna. There are deer, elk, antelope ( pronghorn ), aoudad ( barbary sheep), and many other types of wildlife. The area includes historic Fort Davis, Marfa, Alpine.

"The pronghorn is the only animal in the world with horns that branch and the only horned animal that sheds them every year as though they were antlers. Both males and females can have horns, but the male has much larger horns and the female horn is seldom branched or pronged.

The pronghorn is considered the fastest land mammal in North America, clocked at speeds of up to 60 miles per hour and can maintain a relatively high speed for hours. They have excellent vision which helps them to see vast distances of wide open prairie. Though they run very fast, and can jump small obstacles, they tend to resist jumping even low fences, preferring to climb between or under them instead. This tendency may have played a major role in the prong.gifreduction of pronghorn numbers from their historic range.
Some of the best places to see Pronghorn are just south of Marfa, Texas and between Alpine and Fort Davis, Texas. There is a resident population that lives just south of Marfa and a more mobile population that can often be seen grazing alongside cattle on the plains north of Alpine on both sides of the road leading to Fort Davis."