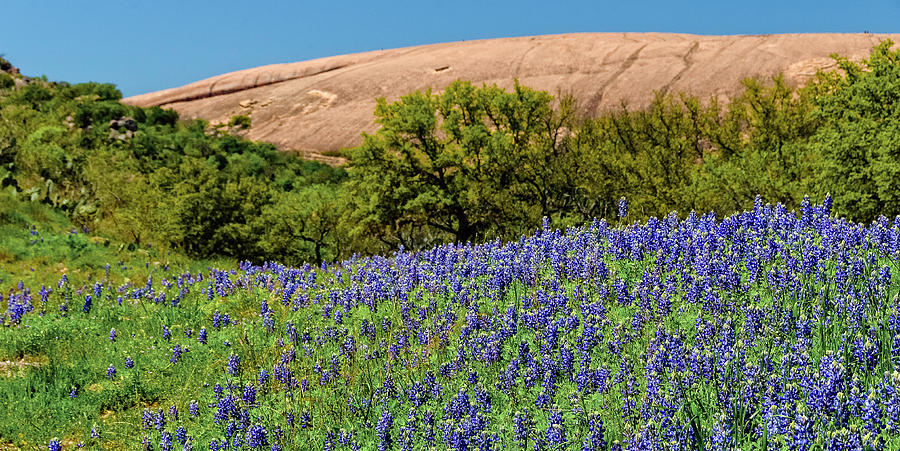 Bluebonnets have been loved since man first trod the vast prairies of Texas. Indians wove fascinating folk tales around them. The early-day Spanish priests gathered the seeds and grew them around their missions. This practice gave rise to the myth that the padres had brought the plant from Spain, but this cannot be true since the two predominant species of bluebonnets are found growing naturally only in Texas and at no other location in the world.

As historian Jack Maguire so aptly wrote, "It's not only the state flower but also a kind of floral trademark almost as well known to outsiders as cowboy boots and the Stetson hat." He goes on to affirm that "The bluebonnet is to Texas what the shamrock is to Ireland, the cherry blossom to Japan, the lily to France, the rose to England and the tulip to Holland."

The ballad of our singing governor, the late W. Lee O'Daniel, goes, "you may be on the plains or the mountains or down where the sea breezes blow, but bluebonnets are one of the prime factors that make the state the most beautiful land that we know.

Texas lupine has larger, more sharply pointed leaves and more numerous flower heads than similar lupines. Light-green, velvety, palmately compound leaves (usually five leaflets) are born from branching, 6-18 in. stems. These stems are topped by clusters of up to 50 fragrant, blue, pea-like flowers. The tip of the cluster is conspicuously white.

This is the species often planted by highway departments and garden clubs and is one of the six Lupinus species which are the state flower of Texas.

Enchanted Rock was rated in 2017 as the best campsite in Texas in a 50-state survey conducted by Msn.com.[6]

The prominent granite dome is visible for many miles in the surrounding basin of the Llano Uplift. The weathered dome, standing above the surrounding plain is known to geologists as a monadnock. The rock is actually the visible above-ground part of a segmented ridge, the surface expression of a large igneous batholith, called the Town Mountain Granite[7] of middle Precambrian (1,082 ± 6 million years ago)[8] material that intruded into earlier metamorphic schist, called the Packsaddle Schist.[7] The intrusive granite of the rock mass, or pluton, was exposed by extensive erosion of the surrounding sedimentary rock, primarily the Cretaceous Edwards limestone, which is exposed a few miles to the south of Enchanted Rock.[7]

congratulations on your recent sale !

Thank you Phil for the l/f and 'lovely' comment!!

Congratulations - Your beautiful picture has been featured in the "Travel Art" group! For further promotion, you can post it to the specific Travel Destinations galleries, our Facebook group and our Pinterest board - all the links are provided on our group's homepage: https://fineartamerica.com/groups/1-travel-art.html * You are also invited to post it to our group's blog: travelartpix.com for worldwide exposure!

Thanks Tatiana for the feature in the "Travel Art" group and the fav!!

Thank you Carrie for the fav and lovely comment!!

Thank you Ms Beth for the 'beautiful' comment and the L!! :)

Thanks John for the fav and the feature in the Fine Art America Group "Images That Excite You!"!!