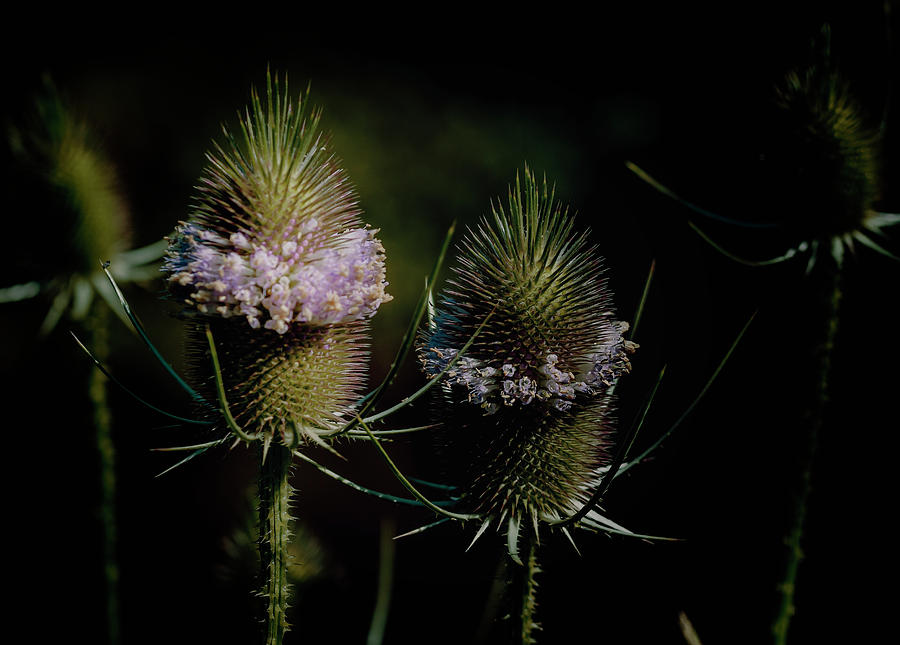 Teasels are like thistles. They grows in sunny waste places. It can get quite tall (approximately 5feet) and attracts many insects. The empty, dried, winter seed heads are often used for crafts and fall dried arrangements. Summer is blooming time.

Picture taken in July, 2018, in Green Lane, Pennsylvania, USA with my Canon T5i and a Tamron 90 mm macro lens.

The information below is taken from Wikipedia.


Dipsacus is a genus of flowering plant in the family Caprifoliaceae.[1] The members of this genus are known as teasel, teazel or teazle. The genus includes about 15 species of tall herbaceous biennial plants (rarely short-lived perennial plants) growing to 1–2.5 metres (3.3–8.2 ft) tall. Dipsacus species are native to Europe, Asia and northern Africa.

The genus name is derived from the word for thirst of water and refers to the cup-like formation made where sessile leaves merge at the stem. Rain water can collect in this receptacle; this may perform the function of preventing sap-sucking insects such as aphids from climbing the stem. A 2011 experiment has shown that adding dead insects to these cups increases the seedset of teasels (but not their height), implying partial carnivory.[2] Carnivory in teasels was discussed by Francis Darwin (son of Charles Darwin) in a paper held by the Royal Society.[3] The leaf shape is lanceolate, 20–40 centimetres (7.9–15.7 in) long and 3–6 centimetres (1.2–2.4 in) broad, with a row of small spines on the underside of the midrib.

Teasels are easily identified with their prickly stem and leaves, and the inflorescence of purple, dark pink or lavender flowers that form a head on the end of the stem(s). The inflorescence is ovoid, 4–10 centimetres (1.6–3.9 in) long and 3–5 centimetres (1.2–2.0 in) broad, with a basal whorl of spiny bracts. The first flowers begin opening in a belt around the middle of the spherical or oval flowerhead, and then open sequentially toward the top and bottom, forming two narrow belts as the flowering progresses. The dried head persists afterwards, with the small (4–6 millimetres (0.16–0.24 in)) seeds maturing in mid autumn.

The seeds are an important winter food resource for some birds, notably the European goldfinch. Teasels are often grown in gardens and encouraged on some nature reserves to attract them.[4]

Teasel is also considered an invasive species in the United States. It is known to form a monoculture, capable of crowding out all native plant species, and therefore is discouraged and/or eliminated within restored open lands and other conservation areas.[5][6][7] Two moths useful for biological control were tested in Slovakia in 2003–2004, including the monophagous Endothenia gentianaeana, but the USDA has not approved either of them for introduction as of February 2018. Instead, the USDA continues to suggest the use of herbicidal chemicals.[8]

This is absolutely a stunning capture! Beautiful!

Michael, you always make my day brighter:>). Thank you.

Teasels are so interesting in every season - gotta love 'em even as they tear me apart as I struggle to get pictures - LOL.

Mother Nature, your digital artistry is SOO amazing...I love how you delve into the world of imaginaria!...and so, today, ...I will explore your WONDERful world!..LF

Oh, Laurel, you've made my day. Thank you once again for your generous time browsing and for your lovely comments:>)

Many thanks for dragging this out of that dark and dusty corner:>)

I'm so pleased you like this:>) . Thanks a million!

Love the dark surrounding them and the spotlight effect on the teasels, lovely work, LF

Gee, Angie, I am so pleased you like the teasels. They are a favorite of mine:>) Thank you!

I appreciate you making time to come by and comment on this image - thank you so much:>)

Thank you for giving me this HUGE smile!

The light is so gorgeous, Mother Nature!! Beautiful image!!! :)))vf

I'm so pleased yo like this. I seem to like having the flowers grab the spotlight (so to speak) and let the background disappear or be only a suggestion. Thanks for the nice comment and the fave!

Your comment is wonderful and I'm most appreciative! thank you for your visit.

I'm very pleased you liked this image. Teasels are truly a plant for all seasons and I photograph them a lot:>)

Congratulations! Your extraordinary image has been featured in the Fine Art America group, Macro Photography Only. You are invited to archive your featured image for permanent storage and for viewing on the Discussions Page. L/faved

My heartfelt thanks for this honor, Nancy! It's a wonderful group and to be among such lovely works by other artists is humbling:>)

You're lovely to say that, Tara, and I'm delighted you like it:>) Thank you!

F/L It is always an exceptional honor to have a place in the features in WFS. There is so much beautiful work! Thank you with all my heart, Randy:>)

Thanks again, Chris:>) So nice of you to make time to come by and comment - I appreciate it.

What a marvelous plant....which I mistook for a thistle. I'll keep an eye out for them....I just love the portrait of them...the lighting so wonderful. F/L++

I, too, thought they were thistles for the longest time! They are certainly prickly enough!!!! I do have a love affair with them. Thanks, dear Lady, for your visit and wonderful support - always welcomed with humility and happiness.