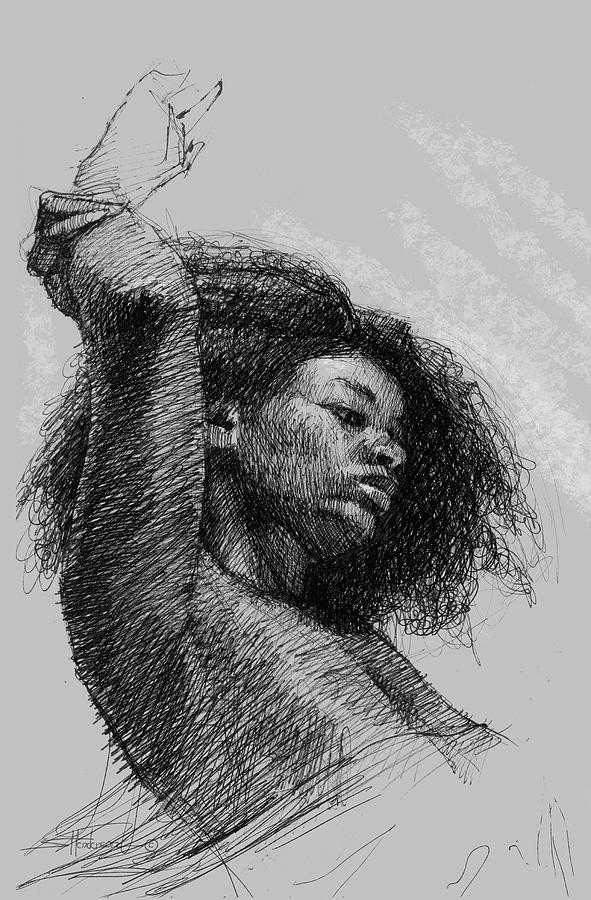 If you are a contemplative, thoughtful person, you have probably been told something like this, more than once:

“Wow. You’re really quiet, You must be shy, because you don’t talk much.”

For some reason, in our mass-media-soaked society of prating, bobbing, babbling heads, it’s apparently not rude to make a pointed, public, personal observation about a person who does not choose to fill the room with the sound of their own voice.

We praise and value the “extrovert,” the “people person” as someone who is enviable because they always have something to say, even when they (quite often) don’t.

And yet it is the person who observes the situation, who listens and considers, who weighs their words before they speak them, who is generally more worth listening to.

The artwork, Taking Time, celebrates such a person. A young woman leans gently back, her hands lightly clasped over her head, her eyes gazing forward into the depths of her thoughts. Her head is tilted, and while her face reflects intense concentration, it is also relaxed. She is deeply thinking but not hurriedly so. She allows the soft movement of her body to reflect the quiet flow of her thoughts.

In today’s world, more than ever, it is imperative that we think – that we seek out and take the time, silence, and calm that such thinking requires, and that we not be impelled to assent, to agree, to nod our head, to acquiesce, to jump into a conversation simply because someone else is impatiently standing by, tapping their foot.

There’s always time to think. We just have to be willing to take it.

Selected as the Social Commentary of the Week for the Fine Art America group, Our World Gallery, April 2021.

One of your peers nominated this image in the 1000 views Groups Special Features #18 promotion discussion. Please help your fellow artists by visiting and passing on the love to another artist in the the 1000 Views Group....L/F/Tw

Congratulation.....your wonderful work has been featured in the 1000 Views on 1 Image Group ..... Please place your featured image in the Feature Archive and any other appropriate Archives l/f/p

“ There’s always time to think. We just have to be willing to take it.“. That tells it all here. Wonderful artistry and prose.

Love the line work in this piece. Fab!

Congratulations, Steve! Your outstanding painting is now featured in the 100 Favorite group! L/F/Ig

Nice image, and another thoughtful description.

This is lovely - such simplicity but also such depth of detail.