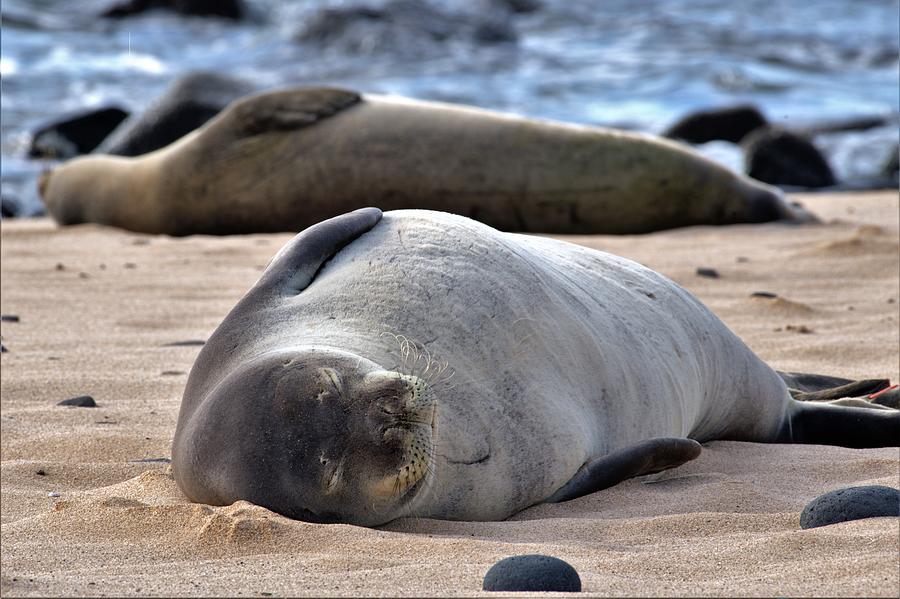 While on the Island of Molokai in early winter, a family of endangered Hawaiian Monk seals hauled up on a beach to take a snooze. These seals are one of the most endangered marine mammals in the world. It is one of the last two species in the world of monk seals, the other being the Mediterranean Monk Seal. The Hawaiian Monk Seal is one of only two mammals native to the Hawaiian Islands (the more endangered Hawaiian Hoary Bat is the other native mammal). The small population of about 1,400 individuals is threatened by human encroachment, very low levels of genetic variation, entanglement in fishing nets, marine debris, disease, and past commercial hunting for skins.
The name for this beloved Hawaiian animal, is Ilio-holo-i-ka-uaua, which means dog runing in rough water. This species is the rarest pinniped in the United States. The population is heavily monitored, and has an estimated 1400 individuals known, with only about 300 found on the main Hawaiian islands. The remainder of seals inhabit the mostly uninhabited northern Hawaiian islands, named the Papahānaumokuākea Marine National Monument which is the largest protected marine sanctuary in the world.

Great thanks to you Maryse. Aloha

Thank you very much Jurgen. Aloha

Love the peaceful expression on that seal's face!

It is endearing, isn't it? Thank you for your comment Sarah. Aloha