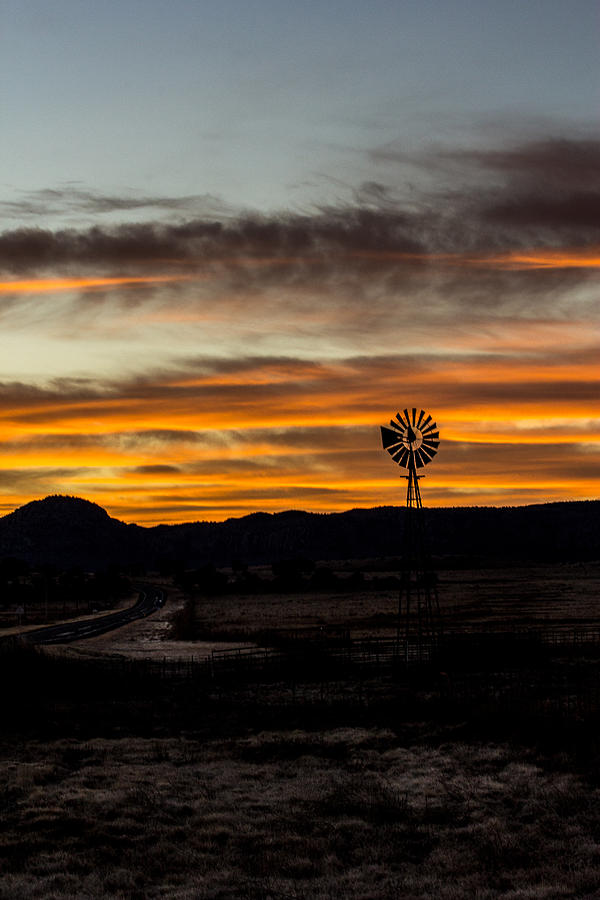 As the sunrise begins on December 25, 2015 the sky turns brilliant colors. The sun paints the clouds. The mountains and windmill silhouette against the canvas. This windmill is on highway 118 just south of Fort Davis, Texas in the Davis Mountains.

The following is from:
http://www.fortdavis.com/history.html

"FORT DAVIS, TEXAS. Fort Davis, the county seat of Jeff Davis County, is on Limpia Creek at the intersection of State highways 17 and 118, eighty miles northeast of Presidio and 175 miles southeast of El Paso in south central Jeff Davis County. The precursor of the town was a rough-and-tumble settlement known as Chihuahua, which formed just southwest of the military post of Fort Davis after it was established in 1854. The fort was on the site of an earlier Indian village, which the earliest Anglo-American explorers of the area called Painted Comanche Camp. When Henry Skillman contracted to carry the mail from San Antonio to El Paso in 1850, a stage stand was established near the site of the future town. E. P. Webster, a native of Illinois, and Diedrick Dutchover, a Belgian immigrant who had fought in the Mexican War, rode with W. A. (Big Foot) Wallace to escort the first mail coach to the site, by way of Fort Concho. Webster remained in Limpia Canyon as the first master of the stage station there and may have been the first white settler in the area. Dutchover rode as a guard for two more years before settling at Fort Davis. During the Civil War, when Confederate troops withdrew from the fort, they left Dutchover, who had maintained strict neutrality while establishing a small sheep ranch near the post, in charge. Almost immediately the Apache chief Nicolás attacked the settlement. Dutchover, a Mexican woman with two children, and four Americans hid on the roof for three days while the Apaches looted the fort. On the third night Dutchover and all the others, except one of the Americans, who had fallen ill, slipped out and began the long trek to Presidio, eighty miles away. One day later the stage arrived to find a ravaged fort and the American dead on the roof, apparently of natural causes. Dutchover and the others staggered into Presidio four days later. The Belgian later returned to Fort Davis and was employed as a hauling contractor.

After 1867, when troops of the Ninth United States Cavalry reoccupied the fort, the town of Fort Davis became "the most important town in the Trans-Pecos country," by virtue of its position at the crossroads of two important trails and its status as a base for travelers and hunters. A. J. Buckoz was given permission to serve as post trader in 1867, although he was unceremoniously replaced four years later. Other settlers who came with the return of the troops included storekeeper Dan Murphy, butcher Sam R. Miller, and baker Whitaker Keesey, who later became the most influential merchant in Fort Davis. Sgt. Charles Mulhern, a native of County Donegal, Ireland, arrived in the late 1870s and eventually acquired a substantial amount of land in the area; he and Gen. Benjamin Grierson, who retired to Fort Davis in 1890, were the only military men who became important local landowners. In the 1880s Fort Davis became a ranching center, as ambitious cattlemen poured into the Trans-Pecos, many of them seeking to escape the Texas fever epidemic raging in other parts of the state.

Although one local historian insisted that "Fort Davis never was a wild town," the place had its share of colorful legends. One involved Dolores Gavino Doporto, who as a young woman became engaged to a goatherd named José. While José was out tending his goats she would communicate with him by building a fire every Thursday night on the low mountain just south of town. Shortly before their wedding day José was killed and scalped by Mescaleros while tending his goats in or near Musquiz Canyon. Dolores, overcome with grief, continued to climb the mountain and build her fire every Thursday night for some thirty or forty years. When she died in 1893 she was buried near the path she had worn on her lonely trips up the mountain, which became known as Dolores Mountain.

When Presidio County was organized in April 1871 it included the areas of present Jeff Davis and Brewster counties. Fort Davis was selected as the county seat, but the courthouse later burned and all records of the election were destroyed. Twelve years later, when the Southern Pacific Railroad built through Marfa, twenty-three miles southwest, many felt that the latter town ought to replace Fort Davis as county seat. They disputed the results of the earlier election, for which no records remained. In July 1885 another election was held, and Marfa was proclaimed the victor. The losers immediately began a movement to organize a new county, with Fort Davis as the seat. By this time the town had an estimated 2,000 inhabitants, three lawyers, a milliner, two saloons, two churches, gristmills and cotton gins, and a weekly newspaper called the Apache Rocket. Jeff Davis County was established by an act of the legislature on March 15, 1887, and Fort Davis was once again a county seat.

Around 1900 the mild climate and location amid the Davis Mountains made Fort Davis a popular summer resort for wealthy Gulf Coast families. Around 1908 the Kansas City, Mexico and Orient Railway proposed building a line to Fort Davis, but the locals protested that it would attract low-class people, and the line was never built. In the late 1920s a group of Oklahoma oilmen decided to turn Fort Davis into a Western movie center, with Jack Hoxie as featured player, but the Great Depression ended that plan. Later attempts to attract visitors met with more success. In May 1946 David A. Simmons of Houston, former president of the American Bar Association, bought the property on which the old fort stood with the intention of restoring it and opening it to the public as a year-round resort. Simmons died in 1951, before his plan could be realized, but in September 1961 Fort Davis National Historic Site came into being; the 460-acre site was formally dedicated in April 1966. A few years later the Chihuahuan Desert Research Institute, headquartered in Alpine, opened an arboretum on a 300-acre tract of land on State Highway 118 just southeast of Fort Davis. Both these attractions, as well as the nearby Davis Mountains State Park and the University of Texas McDonald Observatory,q have helped make tourism an important part of the Fort Davis economy."

Congratulations on your sale !

Congratulations on your sale. Stay blessed, happy and live free. :)