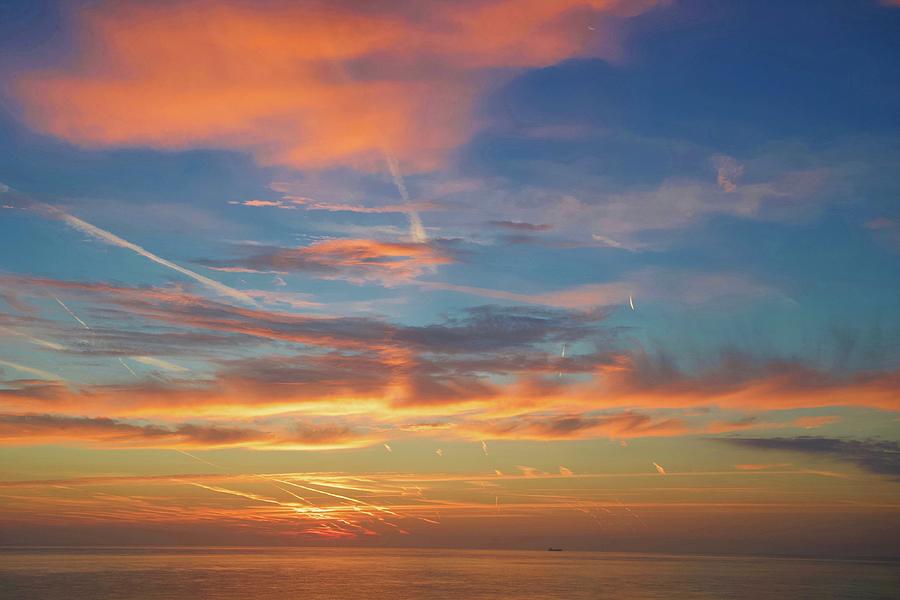 A glorious sunrise over the English resort town of Broadstairs.
Broadstairs is a coastal town on the Isle of Thanet in the Thanet district of east Kent, England, about 80 miles (130 km) east of London. It is part of the civil parish of Broadstairs and St Peter's. Situated between Margate and Ramsgate, Broadstairs is one of Thanet's seaside resorts, known as the "jewel in Thanet's crown". The town's crest's Latin motto is Stella Maris ("Star of the Sea"). The name derives from a former flight of steps in the chalk cliff, which led from the sands up to the 11th-century shrine of St Mary on the cliff's summit.
The town spreads from Haine Road in the west to Kingsgate (named after the landing of King Charles II in 1683), a hamlet in St Peter parish in the north, and to Dumpton in the south (named after the yeoman Dudeman who farmed there in the 13th century). The hamlet of Reading (formerly Reden or Redyng) Street was established by Flemish refugees in the 17th century.

Absolutely "one of a kind", exceptional sunrise capture, Joe! Such a lot going on in this sky, overwhelmingly exciting!!! Fantastic timing! Congratulations to you!!!

Thank you for featuring my image in "Sunrise Sunsets" group.

Thank you for featuring my image in "The Top 50 Features" group.

Thank you for featuring my image in "Jet Trails Contrails Vapor Trails" group.

What a stunning sky! Beautiful capture!

Joe, I this is wonderful with the sky and clouds playing above the water, so beautiful and oustanding!!!

What a tremendous sky!!!! An outstanding capture!!!! Bill stay well