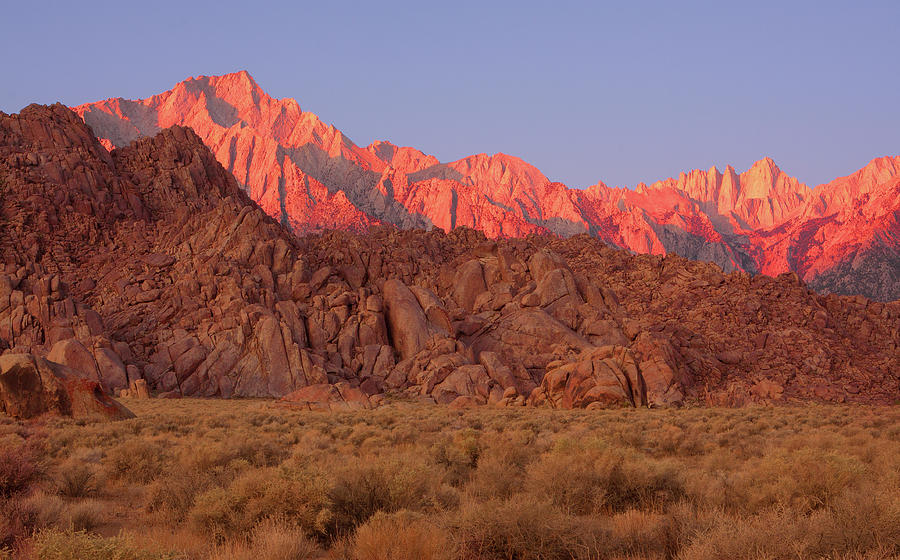 This is dawn’s first light illuminating the Alabama Hills National Scenic Area in California (you are looking west). This view was captured an hour before the companion image “Moonset over Alabama Hills, California” (see my Landscapes and Sierra Nevada galleries).

This image is best viewed large - press Ctrl+ on your keyboard (Command+ on a Mac) to enlarge.

Alabama Hills Scenic Area is known to be among the most spectacular spots for sunrises in the country, as illustrated by this capture - the colors are not exaggerated.

The tall sunlit peak in the background on the left is Mount Whitney and is the highest mountain in the contiguous United States (an elevation of 14,505 feet). The mountain's west slope (the far side) is in the Sequoia National Park and is near the southern end of the John Muir Trail that runs from the Yosemite Valley. The eastern slope (the near side) is in Inyo National Forest, near Lone Pine in Owens Valley. Mount Whitney has an alpine climate and ecology. All wildlife there is transient, such as the Gray-crowned Rosy Finch.

The Alabama Hills, in the mid-ground here, are a formation of rounded rocks and geologically complex Inyo Mountains. The rounded contours of the Alabamas contrast with the sharp ridges of Mount Whitney and other Sierra Nevada peaks to the west. There are two main types of rocks here. One is an orange, somewhat drab weathered metamorphosed volcanic rock that is 150–200 million years old. The other type of rock is 82-85 million years old biotite monzogranite which weathers to potato-shaped large boulders, many of which stand on end due to spheroidal weathering acting on many nearly vertical joints in the rock.

The foreground vegetation, consisting of few sagebrush species, provides a fascinating foreground to the rocks and boulders beyond.

The Alabama Hills have been a popular filming location for television and movie productions, especially when portraying rugged western scenes. Movies filmed here include Iron Man, The Walking Hills, How the West Was Won, and many others.