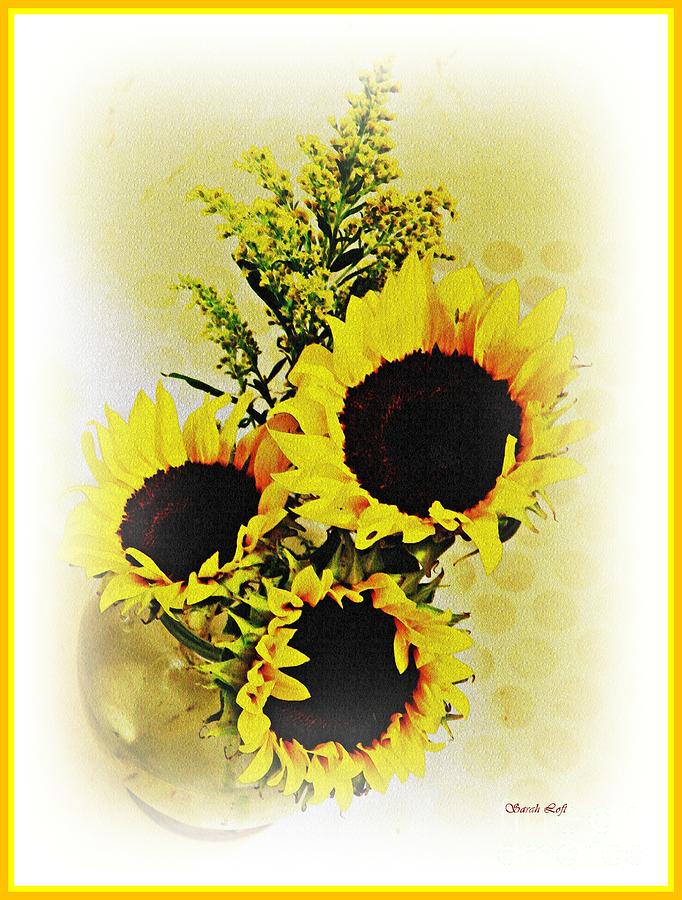 Per Wikipedia: The sunflower (Helianthus annuus) is an annual plant in the family Asteraceae, with a large flower head (capitulum). The stem of the flower can grow up to 3 metres tall, with a flower head that can be 30 cm wide. Other types of sunflowers include the California Royal Sunflower, which has a burgundy (red + purple) flower head.
The flower head is actually an inflorescence made of hundreds or thousands of tiny flowers called florets. The central florets look like the centre of a normal flower, and the outer florets look like yellow petals. All together they make up a "false flower" or pseudanthium. The benefit to the plant is that it is very easily seen by the insects and birds which pollinate it, and it produces thousands of seeds.

The sunflower is the state flower of Kansas. That is why Kansas is sometimes called the Sunflower State. To grow well, sunflowers need full sun. They grow best in fertile, wet, well-drained soil with a lot of mulch. In commercial planting, seeds are planted 45 cm (1.5 ft) apart and 2.5 cm (1 in) deep.

The outer petal-bearing florets are the sterile florets and can be yellow, red, orange, or other colours. The florets inside the circular head are called disc florets, which mature into seeds.

The flower petals within the sunflower's cluster are always in a spiral pattern. Generally, each floret is oriented toward the next by approximately the golden angle, 137.5 degrees, producing a pattern of interconnecting spirals, where the number of left spirals and the number of right spirals are successive Fibonacci numbers. Typically, there are 34 spirals in one direction and 55 in the other; on a very large sunflower there could be 89 in one direction and 144 in the other.
Sunflowers commonly grow to heights between 1.5 and 3.5 m (5 to12 ft.). The tallest sunflower confirmed by Guinness World Records is 9.17 m (2014, Germany). In 16th century Europe the record was already 7.3 m (24 ft., Spain). Most cultivars are variants of H. annuus, but four other species (all perennials) are also domesticated. This includes H. tuberosus, the Jerusalem Artichoke, which produces edible tubers.

Sunflower "whole seed" (fruit) are sold as a snack food, after roasting in ovens, with or without salt added. Sunflowers can be processed into a peanut butter alternative, Sunbutter. In Germany, it is mixed together with rye flour to make Sonnenblumenkernbrot (literally: sunflower whole seed bread), which is quite popular in German-speaking Europe. It is also sold as food for birds and can be used directly in cooking and salads. Sunflower oil, extracted from the seeds, is used for cooking, as a carrier oil and to produce margarine and biodiesel, as it is cheaper than olive oil. A range of sunflower varieties exist with differing fatty acid compositions; some 'high oleic' types contain a higher level of healthy monounsaturated fats in their oil than Olive oil.

The cake remaining after the seeds have been processed for oil is used as a livestock feed. Some recently developed cultivars have drooping heads. These cultivars are less attractive to gardeners growing the flowers as ornamental plants, but appeal to farmers, because they reduce bird damage and losses from some plant diseases. Sunflowers also produce latex and are the subject of experiments to improve their suitability as an alternative crop for producing hypoallergenic rubber. Traditionally, several Native American groups planted sunflowers on the north edges of their gardens as a "fourth sister" to the better known three sisters combination of corn, beans, and squash. Annual species are often planted for their allelopathic properties. However, for commercial farmers growing commodity crops, the sunflower, like any other unwanted plant, is often considered a weed. Especially in the midwestern USA, wild (perennial) species are often found in corn and soybean fields and can have a negative impact on yields. Sunflowers may also be used to extract toxic ingredients from soil, such as lead, arsenic and uranium. They were used to remove uranium, cesium-137, and strontium-90 from soil after the Chernobyl disaster (see phytoremediation).

Featured in the Visions of Spring- Glances of Summer group, August 2016.

Love the processing, framing and color of these beauties, Sarah! Well done! l/f

Lovely! So happy, sweet, and vibrant!

Wonderful depiction of one of my favs, Sarah! (I'm from Kansas) l/f

Superb original scene u made with sunflowers!

This is gorgeous Sarah