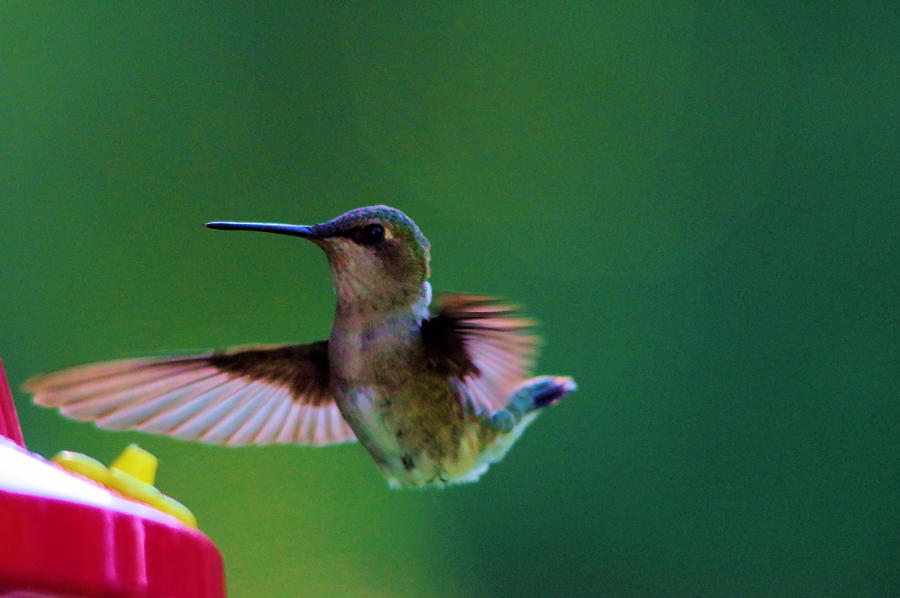 For other uses, see Hummingbird (disambiguation).
Hummingbird
Temporal range: Rupelian to present
Trinidad and Tobago hummingbirds composite.jpg
Four hummingbirds
from Trinidad and Tobago
Scientific classification e
Kingdom: Animalia
Phylum: Chordata
Class: Aves
Order: Apodiformes
Family: Trochilidae
Vigors, 1825
Subfamilies
Phaethornithinae
Trochilinae
For a taxonomic list of genera, see:
List of hummingbird genera
For an alphabetic species list, see:
List of hummingbirds
Hummingbirds are birds from the Americas that constitute the family Trochilidae. They are among the smallest of birds, most species measuring 7.5–13 cm (3–5 in) in length. Indeed, the smallest extant bird species is a hummingbird, the 5 cm (2.0 in) bee hummingbird weighing less than 2.5 g (0.09 oz).
They are known as hummingbirds because of the humming sound created by their beating wings which flap at high frequencies audible to humans. They hover in mid-air at rapid wing-flapping rates, typically around 50 times per second, allowing them also to fly at speeds exceeding 15 m/s (54 km/h; 34 mph).[1][2]
Hummingbirds have the highest metabolism of any homeothermic animal.[3] To conserve energy when food is scarce, and nightly when not foraging, they go into torpor, a state similar to hibernation, slowing metabolic rate to 1/15th of its normal rate.[4]
Contents [hide]
1 Evolution
1.1 Sexual dimorphisms
1.2 Co-evolution with ornithophilous flowers
1.3 Possible beak evolution
2 Systematics
2.1 Lists of genera and species
3 Specialized characteristics and metabolism
3.1 Vision
3.2 Metabolism
3.3 Kidney function
3.4 Flight stability
3.5 Song and vocal learning
3.6 Torpor
3.7 Lifespan
4 Reproduction
5 Feather colors
6 Aerodynamics of flight
7 Feather sonation
7.1 Courtship dives
7.2 Wing feather trill
8 Range
9 Migration
10 Diet and specializations for food gathering
10.1 Perception of sweet nectar
10.2 Tongue as a micropump
10.3 Feeders and artificial nectar
10.3.1 Visual cues of foraging
11 Superficially similar birds
12 In myth and culture
13 Gallery
14 See also
15 References
16 External links
Evolution[edit]
A map of the hummingbird family tree—reconstructed from analysis of 284 of the world's 338 known species—shows rapid diversification from 22 million years ago.[5] Hummingbirds fall into nine main clades, the Topazes, Hermits, Mangoes, Brilliants, Coquettes, Patagona, Mountain Gems, Bees, and Emeralds, defining their relationship to nectar-bearing flowering plants and the birds' continued spread into new geographic areas.[5][6][7][8]
While all hummingbirds depend on flower nectar to fuel their high metabolisms and hovering flight, coordinated changes in flower- and bill shape stimulated the formation of new species of hummingbirds and plants. Due to this exceptional evolutionary pattern, as many as 140 hummingbird species can coexist in a specific region, such as the Andes range.[5]
The hummingbird evolutionary tree shows ancestral hummingbirds splitting from insectivorous swifts (family Apodidae) and treeswifts (family Hemiprocnidae) about 42 million years ago, probably in Eurasia.[5] One key evolutionary factor appears to be an altered taste receptor that enabled hummingbirds to seek nectar.[9] By 22 million years ago the ancestral species of current hummingbirds became established in South America, where environmental conditions stimulated further diversification.[5]
The Andes Mountains appear to be a particularly rich environment for hummingbird evolution because diversification occurred simultaneously with mountain uplift over the past 10 million years.[5] Hummingbirds remain in dynamic diversification inhabiting ecological regions across South America, North America, and the Caribbean, indicating an enlarging evolutionary radiation.[5]
Within the same geographic region, hummingbird clades co-evolved with nectar-bearing plant clades, affecting mechanisms of pollination.[10][11] The same is true for the sword-billed hummingbird (Ensifera ensifera), one of the morphologically most extreme species, and one of its main food plant clades (Passiflora section Tacsonia).[12]
Sexual dimorphisms[edit]
Hummingbirds exhibit sexual size dimorphism according to Rensch's rule,[13] in which males are smaller than females in small species, and males are larger than females in large-bodied species.[14] The extent of this sexual size difference varies among clades of hummingbirds.[14][15] For example, the Mellisugini clade exhibits a large size dimorphism, with females being larger than males.[15] Conversely, the Lophomithini clade displays very little size dimorphism; males and females are similar in size.[15] Sexual dimorphisms in beak size and shape are also present between male and female hummingbirds,[15] where in many clades, females have longer, more curved beaks favored for accessing nectar from tall flowers.[16] For males and females of the same size, females will tend to have larger beaks.[15]
Sexual size and beak differences likely evolved due to constraints imposed by courtship because mating displays of male hummingbirds require complex aerial maneuvers and are costly in terms of energy.[13] Males tend to be smaller than females, allowing conservation of energy to forage competitively and participate more frequently in courtship.[13] Thus, sexual selection will favor smaller male hummingbirds.[13]
Female hummingbirds tend to be larger, requiring more energy, with longer beaks that allow for more effective reach into crevices of tall flowers for nectar.[16] Thus females are better at foraging, acquiring flower nectar, and supporting the energy demands of their larger body size.[16] Directional selection will thus favor the larger hummingbirds in terms of acquiring food.[14]
Another evolutionary cause of this sexual bill dimorphism is that the selective forces from competition for nectar between the sexes of each species are what drive the sexual dimorphism.[15] Depending on which sex holds territory in the species, it is advantageous for the other sex to have a longer bill and be able to feed on a wide variety of flowers, decreasing intraspecific competition.[16] For example, in species of hummingbirds where males have longer bills, males do not hold a specific territory and have a lek mating system.[16] In species where males have shorter bills than females, males defend their resources and therefore females must have a longer bill in order to feed from a broader range of flower.[16]
Co-evolution with ornithophilous flowers[edit]

Purple-throated carib feeding at a flower
Hummingbirds are specialized nectarivores[17] and are tied to the ornithophilous flowers upon which they feed. Some species, especially those with unusual bill shapes such as the sword-billed hummingbird and the sicklebills, are co-evolved with a small number of flower species. The bee hummingbird (Mellisuga helenae) – the world's smallest bird – evolved to dwarfism likely because it had to compete with long-billed hummingbirds having an advantage for nectar foraging from specialized flowers, consequently leading the bee hummingbird to more successfully compete for flower foraging against insects.[18][19]
Many plants pollinated by hummingbirds produce flowers in shades of red, orange, and bright pink, though the birds will take nectar from flowers of other colors as well. Hummingbirds can see wavelengths into the near-ultraviolet, but hummingbird-pollinated flowers do not reflect these wavelengths as many insect-pollinated flowers do. This narrow color spectrum may render hummingbird-pollinated flowers relatively inconspicuous to most insects, thereby reducing nectar robbing.[20][21] Hummingbird-pollinated flowers also produce relatively weak nectar (averaging 25% sugars w/w) containing a high proportion of sucrose, whereas insect-pollinated flowers typically produce more concentrated nectars dominated by fructose and glucose.[22]
Possible beak evolution[edit]
Upon maturity, males of one species, Phaethornis longirostris, the long-billed hermit, appear to be evolving a dagger-like weapon on the beak tip as a secondary sexual trait to defend mating areas.[23]

Congratulations!! This stunning image has been selected to be featured for the week in the “Art for Ever with You” Group Home Page. You are welcome to add a preview of this featured image to the group’s discussion post titled “2019 July: Stunning Group Featured Images and Thank-you’s” for a permanent display within the group, to share this achievement with others. Also feel free to post your feature on our group Facebook page: https://www.facebook.com/groups/296998814248643/ Thank you for your participation in the group! ~Jan (July 2, 2019)

Awesome capture Jeff, love these little jewels! I have my sweet nectar juice container right near a big window and love to watch them. They bring joy and happiness, hummingbird medicine l/f ~Blessings & Peace :)