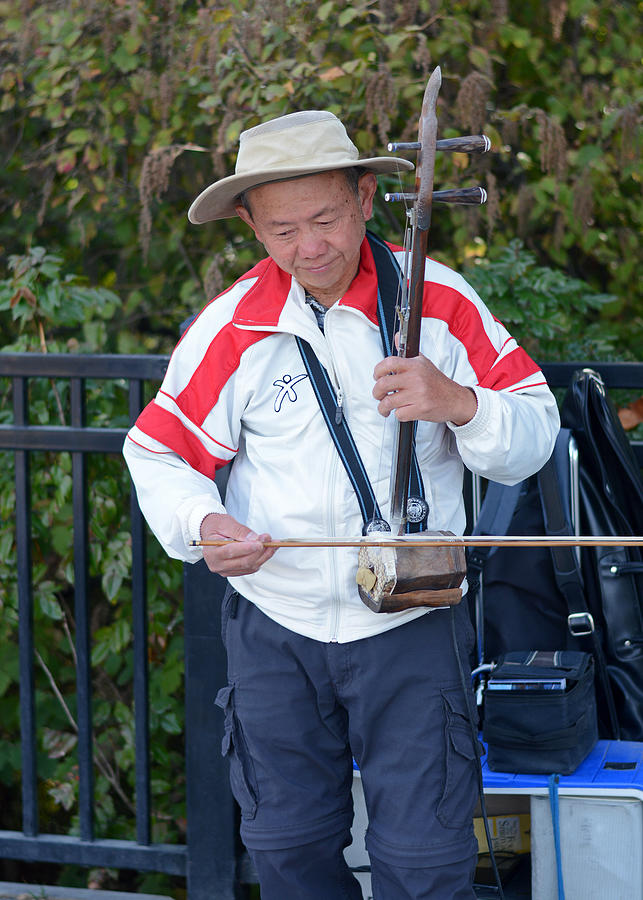 The erhu is a two-stringed bowed musical instrument, more specifically a spike fiddle, which may also be called a southern fiddle. Sometimes known in the Western world as the Chinese violin or a Chinese two-stringed fiddle. Used as a solo instrument, or in small ensembles and large orchestras, the erhu is the most popular of the huqin family of traditional bowed string instruments, together with zhonghu, gaohu, sihu, etc., used by various ethnic groups of China. A very versatile instrument, the erhu is used in both traditional and contemporary music arrangements.

The sound body of the erhu is a drum-like little case usually made of ebony or sandalwood and snakeskins. It usually has a hexagonal shape with the length of approximately 13 cm. The front opening is covered with snakeskin (python) and the back is left open. Thus the case can amplify the vibrations of the strings.

The neck of the erhu is about 81 cm long and is manufactured with the same materials as the drum. The top of the stem is bent for decoration. The two strings of the erhu is usually tuned D and A. The two tuning handles (pegs), as seen in this photograph, are found close to the end of the stem. In contrast to the lute, there are no frets on the erhu and, in contrast to the violin, no touching board.

The erhu is mainly an instrument for melody, in a sense like voice. The left hand slides up and down the instrument while fingers pressing the strings to create desired pitch and "sliding" effects. The right hand pushes the horsehair against this or that string while moving horizontally, to create the sounds on either of the two strings.

Occasionally some musicians hold the instrument with the help of a rope, in the same way as for saxophone, in order to play standing or walking. However, musicians normally play seated unless absolutely necessary to stand, as this gentleman is doing. In the old days, street musicians often used this method in order to play while walking.

The erhu sounds similar to human voice, and can imitate many natural sounds, such as birds and horses. It is a very expressive instrument, best-known for playing melancholic music, though capable of making cheerful melody too.

Copyright 2015 Connie Steitz Fox. All Rights Reserved. Please note: The watermark, if visible, will not appear on your purchased artwork. This gentleman consented to allowing me to take this series of pictures of him (this one was my favorite), and I left a generous gift for his kindness.

FEATURED on the homepage of the Awesome Asia group, November 2015, Forward Exposure December 2015, Travel Art, and Just Perfect, February 2020. My thanks!

Thank you, Janis Vaiba, for the lovely homepage feature in Just Perfect!

Tatiana, thank you so much for featuring this image. He played so beautifully, and I am pleased to be able to share this singular moment in time.

Robert, thank you so much for your kind words. His expression is the reason I chose this particular image from the half dozen I took that day. Your support is appreciated!

Congratulations: your wonderful street capture of this musician playing the Ertu,is being fetured in the 'Awesome Asia' group..Connie..:)

Ian, my warmest thanks for the awesome feature of this image in your "Awesome Asia" group. I appreciate the exposure!