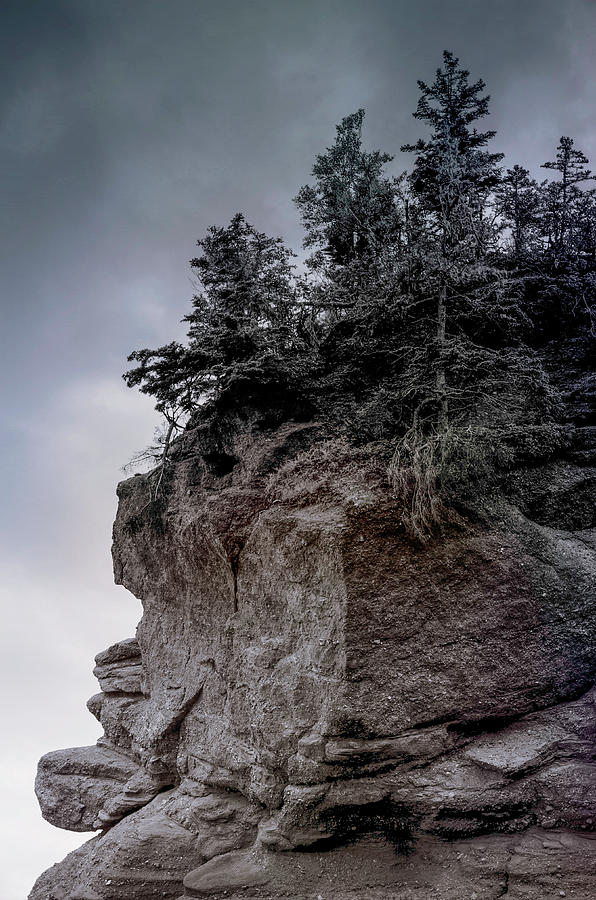 While hiking around these boulders known as Hopewell Rocks, New Brunswick Canada I spotted this rocky outcrop and it wasn’t hard to imagine it having a face. Weathered and worn, erosion sculpted the boulder with features resembling an eye, nose and mouth. Even the trees resembled hair.
This is a common occurrence for us humans, as we are wired to recognize facial features. Through evolution that helped us to determine friend or foe, fight or flee. Psychology gave it the name Pareidolia.
Perhaps Mother Nature could be considered the first artist. Long before our Neanderthal ancestors came upon the scene, nature had for millennia been carving these faces in trees and rock long before man’s face was ever present on earth.
When first viewed by men, were they frightened, did they ascribe some religious meaning to them, did they inspire primitive cave drawings.

Congratulations on being featured in the FAA Group 'Off the Beaten Path.' To ensure your feature remains available over time, post your featured image(s) in the Group's 'Thanks for the Feature / Image Archive.’ l/f. If you allow pinning, your image will be pinned to the Group’s features board (www.pinterest.ca/tendrelimages/off-the-beaten-path/) (Hopewell Rocks - isn't that New Brunswick, not Newfoundland?)

Thank you for the feature Murray, very much appreciated!

Fine Art by Alexandra  28 Days Ago

Wonderful capture in black and white in Stonefaced

A photo that captures well the weathered and worn feel mentioned in your commentary, great work!

Great capture of this rugged scene!

What a stunning image... such well captured Jim ! v.f.l