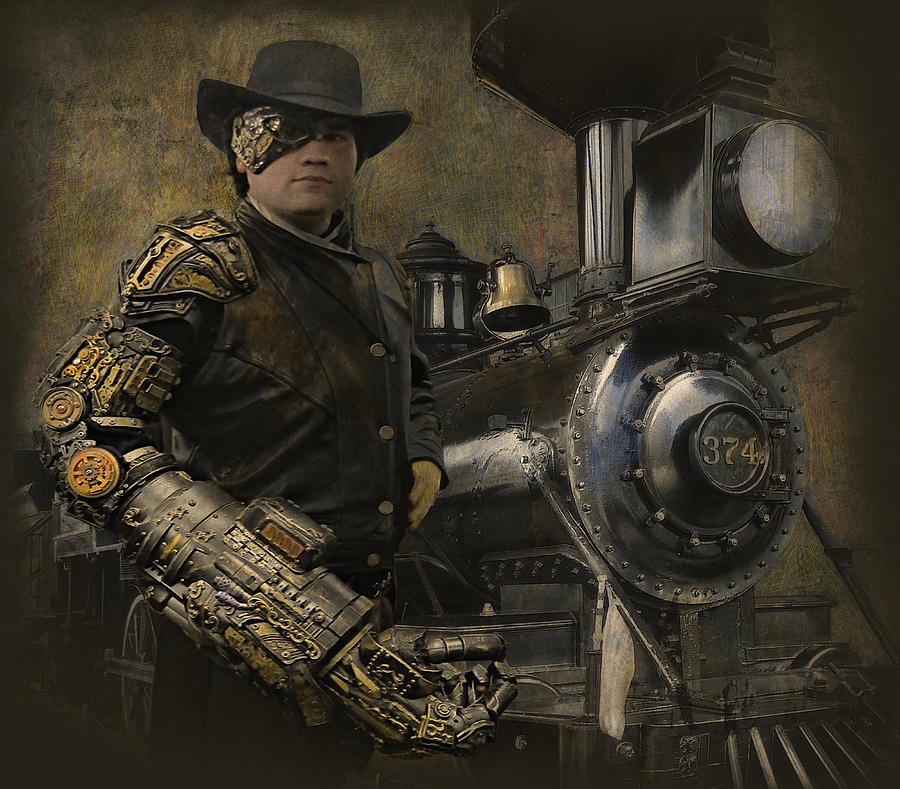 Steampunk fashion is a statement that harkens back to the time before electric engines and modern times. According to Wikipedia "Steampunk is a sub-genre of science fiction that typically features steam-powered machinery,especially in a setting inspired by industrialized Western civilization during the 19th century. Therefore, steampunk works are often set in an alternate history of the 19th century's British Victorian era or American "Wild West", in a post-apocalyptic future during which steam power has regained mainstream use, or in a fantasy world that similarly employs steam power. Steampunk perhaps most recognizably features anachronistic technologies or retro-futuristic inventions as people in the 19th century might have envisioned them, and is likewise rooted in the era's perspective on fashion, culture, architectural style, and art. Such technology may include fictional machines like those found in the works of H. G. Wells and Jules Verne, or the modern authors Philip Pullman, Scott Westerfeld, and China Mi�lle. Other examples of steampunk contain alternate history-style presentations of such technology as lighter-than-air airships, analog computers, or such digital mechanical computers as Charles Babbage and Ada Lovelace's Analytical Engine.
Steampunk may also, though not necessarily, incorporate additional elements from the genres of fantasy, horror, historical fiction, alternate history, or other branches of speculative fiction, making it often a hybrid genre. The term steampunk's first known appearance was in 1987, though it now retroactively refers to many works of fiction created even as far back as the 1950s or 1960s". For the artist, visiting a 'convention' of steampunk enthusiasts is tantamount to 'nirvana' as everywhere you turn there are wonderful fashions that 'have' to be photographed (if you know what I mean). So in this work I used an image taken by Laurie Hemingway, a friend and fellow artist (by permission), with an image of a steam powered train that is taken from wikimedia commons with multiple stylistic manipulations to create the final result.

Steampunk also refers to any of the artistic styles, clothing fashions, or subcultures, that have developed from the aesthetics of steampunk fiction, Victorian-era fiction, and films from the mid-20th century.[2] Various modern utilitarian objects have been modded by individual artisans into a pseudo-Victorian mechanical "steampunk" style, and a number of visual and musical artists have been described as steampunk.

Congratulations! I have selected this piece to be featured in the Art for the Love of Art group.

I love your surreal compositions, Jeff! This one is really marvelous. It's one of your jobs that I like the most. L&F

Thanks Ramon. I alternate between surreal and real depending on my mood. Much appreciated.

Thanks so much Diamante for the honor.

Thanks so much for the feature.

Thanks so much. Appreciated.

Thanks so much Christopher.

Congratulations on your feature in the 500 Views Group! Lf

Thanks so much Kay.

Hi Jeff...I like your image. Love this Steampunk guy. Your gallery is excellent and I intend to check it out regularly. Keep up the good work...Cheers Bob fv

Hey Bob. Thanks for coming and thanks for posting. Happy New Year.....

Congratulations, your creative and unique art work is featured in the "Out Of The Ordinary 1 A Day" group! 6/27/16

Thanks so much Lyric.

Thanks so much Barbara for this nice comment and the l/f. Much appreciated.

Your creative artwork is of the highest standard and has earned a place here in the iSAW Group. It is an honour to share this beautiful and well composed art piece in our featured section to other members and viewers alike. Thank you and congratulations!

Wow, I just came across this very nice honor and want to thank you for this kindness. Regards.

Thanks "Images that Excite You" for the wonderful honor of the feature.

Wow, this shot is well done! love the steampunk genre and think you have nailed this shot. Great work!

Thank You for Submitting your Artwork.... Liked the subject, description, technique, composition, and color... So this week it was Published in the Internet publication ARTISTS NEWS.... Make sure you are subscribed, so you can Promote weekly... YOU or Friends Can use Ctl-C to copy the link: http://paper.li/f-1343723559 and Ctl-V to put it into your the Browser Address bar, to view the publication. Then, Tweet, FB, and email, etc a copy of the publication, to just anyone you who would be interested.

So pleased you thought my work worthy. Much appreciated. I did tweet,FB, etc. via your Artists News. Thanks again.

Thanks Photography and Texture for the feature.

Thanks Gray. Much appreciated.

Congratulations, Jeff!~You are the featured Artist of the Week in the Old Masters--Photographers and Digital Arts group. Your work is stunning and masterful. This is one of the artworks chosen for the feature. This also receives a vote and fave.

Thanks Lenore. I really appreciate being the featured artist of the week. And thanks for picking this work.

Was a fun piece to do. Thanks for the comment and vote.

Thanks Dan. Much appreciated.

Thanks for this very nice comment and the v,f,t,g

Very creative arm isn't it. Thanks.

Love it, but I wouldn't want to meet him in a dark alley.

Nor would I. Thanks.

What an intricate work of art, so much to view all in one image! f/v

Used a different technique with this one but in order to see it you must blow it up. Thanks much for commenting and the f/v