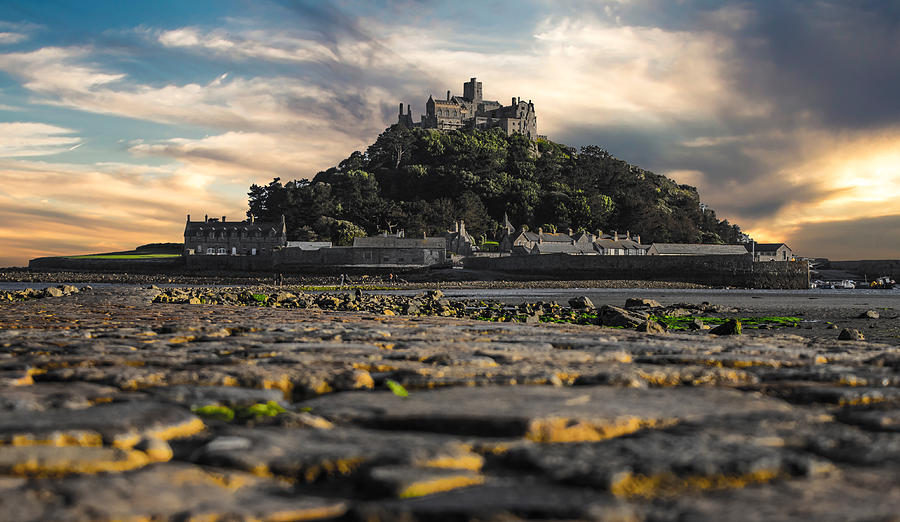 The chapel is extra-diocesan, and the castle is the official residence of Lord St Levan. Many relics, chiefly armour and antique furniture, are preserved in the castle. The chapel of St Michael, a fifteenth-century building, has an embattled tower, in one angle of which is a small turret, which served for the guidance of ships. Chapel Rock, on the beach, marks the site of a shrine dedicated to the Virgin Mary, where pilgrims paused to worship before ascending the Mount. A few houses are built on the hillside facing Marazion, and a spring supplies them with water. There is a row of eight houses at the back of the present village; they were built in 1885 and are known as Elizabeth Terrace. A spring supplies them with water. Some of the houses are occupied by staff working in the castle and elsewhere on the island. The island cemetery (currently no public access) contains the graves of former residents of the island and several drowned sailors. There are also buildings that were formerly the steward's house, a changing-room for bathers, the stables, the laundry, a barge house, a sail loft (now a restaurant), and two former inns. A former bowling green adjoins one of the buildings.

The harbour, widened in 1823 to allow vessels of 500 tons to enter, has a pier dating from the 15th century which was subsequently enlarged and restored. Queen Victoria landed at the harbour from the royal yacht in 1846, and a brass inlay of her footstep can be seen at the top of the landing stage. King Edward VII's footstep is also visible near the bowling-green. In 1967 the Queen Mother entered the harbour in a pinnace from the royal yacht Britannia.

One of the most noteworthy points of interest on the island is the underground railway, which is still used to transport goods from the harbour up to the castle. It was built by miners around 1900, replacing the pack horses which had previously been used. Due to the steep gradient, it cannot be used for passengers. The National Trust currently does not permit public access or viewing of the railway.

Some studies indicate that any rise in ocean waters as well as existing natural erosion would put some of the Cornwall coast at risk, including St. Michael's Mount.[

Loving this!! Very dramatic, and yet, so still like the quietness before a storm.