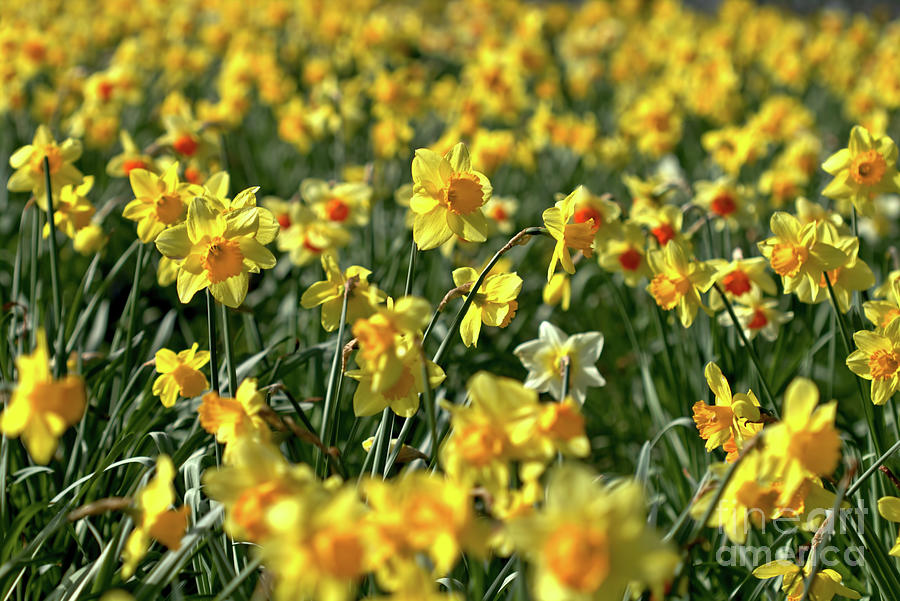 Gorgeous blanket of yellow daffodil's as far as the eye can see a sign that spring is here. Narcissus is a genus of predominantly spring flowering perennial plants of the amaryllis family, Amaryllidaceae. Various common names including daffodil,[Note 1] narcissus and jonquil are used to describe all or some members of the genus. Narcissus has conspicuous flowers with six petal-like tepals surmounted by a cup- or trumpet-shaped corona. The flowers are generally white and yellow (also orange or pink in garden varieties), with either uniform or contrasting coloured tepals and corona.
The species are native to meadows and woods in southern Europe and North Africa with a centre of diversity in the Western Mediterranean, particularly the Iberian peninsula. Both wild and cultivated plants have naturalised widely, and were introduced into the Far East prior to the tenth century. Narcissi tend to be long-lived bulbs, which propagate by division, but are also insect-pollinated.
Historical accounts suggest narcissi have been cultivated from the earliest times, but became increasingly popular in Europe after the 16th century and by the late 19th century were an important commercial crop centred primarily in the Netherlands. Today narcissi are popular as cut flowers and as ornamental plants in private and public gardens.
Like other members of their family, narcissi produce a number of different alkaloids, which provide some protection for the plant, but may be poisonous if accidentally ingested. This property has been exploited for medicinal use in traditional healing and has resulted in the production of galantamine for the treatment of Alzheimer's dementia. Long celebrated in art and literature, narcissi are associated with a number of themes in different cultures, ranging from death to good fortune, and as symbols of spring.
The daffodil is the national flower of Wales