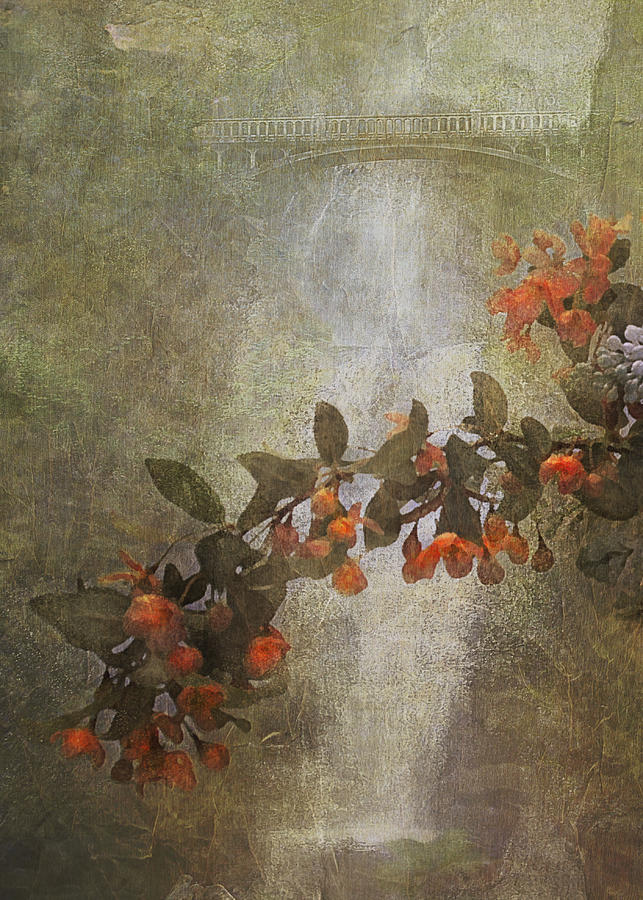 A fusion work of beauty and peace. This waterfall is located along a wonderful drive along the columbia river that separates Washington from Oregon states. The area is generally called 'The Gorge'. It is quite spectacular. The waterfall is, by some accounts, as magnificent and memorable as any in the country. It is located just a 30- minute drive outside of Portland. Multnomah Falls towers 611-feet-tall. One of the more interesting elements of the falls is the bridge that can be traversed about half way up. There are actually two falls, an upper segment and a lower falls of 69 feet (21 m), with a gradual 9 foot (3 m) drop in elevation between the two. Underground springs from Larch Mountain are the year-round source of water for the waterfall, augmented by spring runoff from the mountain's snowpack and rainwater during the other seasons. According to Wikipedia, Multnomah Falls is listed as the 137th tallest waterfall in the United States by the World Waterfall Database. You get to the foot bridge via a short hike that is easily accessable to most people. The falls roar over many ledges and the water falls into a small pool and then flows into the Columbia river. The landscape surrounding the falls is beautiful with large firs and small ferns. The entire scene is awe-inspiring. From the parking area off of I-84, a 5-minute walk is all that separates you from the exhilarating spray at the base of the falls.
According to Native American lore, Multnomah Falls was created to win the heart of a young princess who wanted a hidden place to bathe. Although you can see the top portion of the falls from the highway, to view both tiers you have to walk to the viewing area located in a carved-out opening in the rock face. Tilting your head up in the narrow rocky confines of the steep cliffs, you get a mind-boggling perspective on the sheer magnitude of the falls. You can also climb to the top of the falls, but frankly the midpoint and the bridge is the best viewpoint to see the falls beauty. If you ever get to Portland or Vancouver, Washington, you must....and I mean MUST get to the falls. I have been there many times during different seasons and I continue to find it mystical and inspiring. One other interesting factoid, according to Wikipedia, on Labor Day in September 1995, a 400-ton boulder, loosened by erosion, fell 225 feet (69 m) from the face of the waterfall into the upper cascade pool, above Benson Bridge. It caused a 70-foot (21 m) splash of water and gravel to wash over the footbridge, causing minor injuries to twenty members of a wedding party that happened to be on it for photos at the time

Thanks so much Imi.

Thanks so much Irene.

Thanks so much for commenting Vasil.

Sorry for the belated reply. You comment is much appreciated.

Thanks so much for the feature.

Thanks so much Mary. I lived in the islands for 10 years and worked an additional 6 coming and going. There are wonderful waterfalls. This one is also amazing.

This is lovely! f/v

So beautful! Love the scene and your treatment! fv

Thanks so much John for your comment and fvtw g+

This is gorgeous! v/f

Thanks so much Steve. Appreciate your thought and v/f

Thanks Annie, Much appreciated.

Jeff, the vegetation added a whole new dimension to the work. V. Eva

Yes, I wanted to do something entirely different. My texture also was used to give it a 'chalky' feeling...like pastels were used. Did it work?

I've seen this angle many times, but you made this unique excellent

I know what you mean.....it is so photographed. Thanks for noticing the uniqueness of it. Just wanted to do something a bit more to make it subtle but expressive. Thanks for the comment.

Thanks for the feature in Artists News

Well done, Jeff - it is a true masterpiece. A vote and a huge favorite

Thanks so much Charles. I really appreciate the look and vote. And fav.

Jeff, I love this ... what a wonderful combination of muted tones ... the mystical bridge and waterfall in the background are a joyous surprise!!! f/v

I am so glad you have taken a look through my port Lois. I will be going to yours very, very soon......Also appreciate the f/v.

wonderful and thanks Sandi.

Jeff, this is a beautiful vintage like artwork - I love the old world look to this work. v/f

Zeana, i really appreciate not only the v/f but your wonderful comment. Thanks so much.

Cool! Visiting from Beauty of this World. v/f.

Thanks Cheryl for the endorsement.

You get both vote and fav from me! Beautiul! Visit from Beauty of This World!

Thanks very much Gun for this vote and fav as well as your comment. Much appreciated.

Visiting from Beauty of this world. V

Thanks Joan and for the vote as well.

This is gorgeous!! f/v Beauty of this world.

Thanks Devorah for commenting as well as f/v'ing. Much appreciated.

beautiful, love the colors and rendering... visiting from beauty of this world! voted

Thanks for the feature in 'A Sense of Serenity'.....It is much appreciated.

Laurie...thanks for taking the time to review my work.....and your comment here. Regards

Thanks so much Barb. for the comment and vote/fav.

Thanks much Adel. Appreciate your look at the images and comments.

Thanks so much Eena. A different color spectrum for me.

Love this beautiful work as well ! Looks like at least three layers, floral,water fall and texture all put together in such a wonderful way. Great com. as well! v.f

Actually Debbie, there are way more than three. But for one of the background textures I crumbled up ricepaper and then photographed it. This captured the look of a 'timeless' piece as described by Alex.

Beautiful mood in this work. I agree with Angelina, it does has a timeless atmosphere.

This has a beautiful timelessness to it.

Thanks Angelina. Hoping this will take off.

Should be ordered in small sizes only. It is not meant to be blown up past 20 inches.