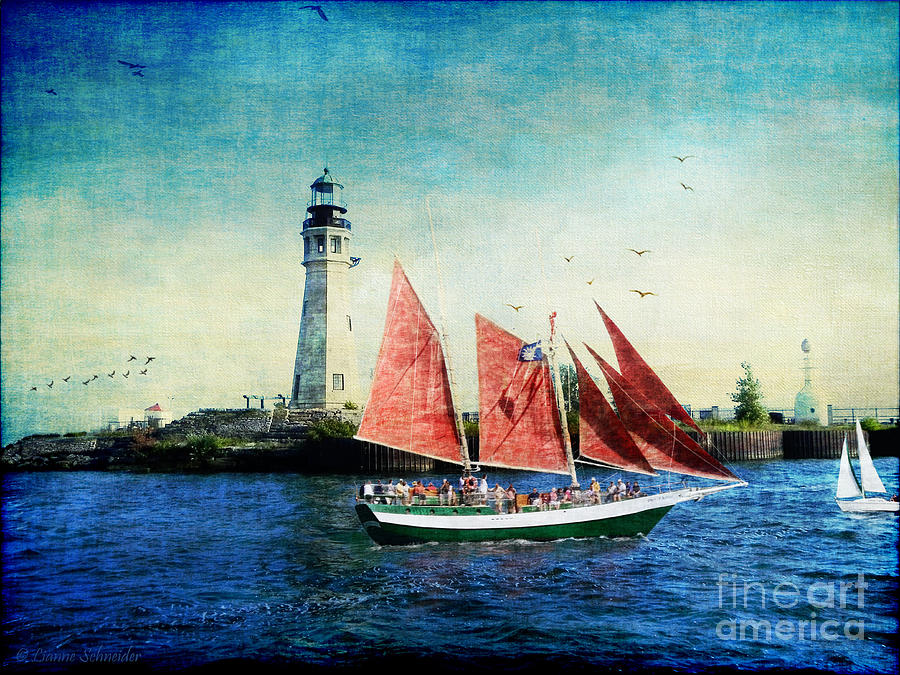 Reminiscent of the tall ships of ages past, the Spirit of Buffalo keeps the sailing tradition alive on Lake Erie. I sailed aboard her in Mid-August, but of course, as I was on board I couldn't get a shot of her under full sail. For that part of the image, I'm so grateful to my friend Bill Leslie (who has a sailboat in the harbor himself) who kindly allowed me to use his shot of the ship which I have placed in front of my own shot of the Buffalo Harbor Lighthouse. The composite picture was then hand painted digitally and then textured in Photoshop. I can't look at this lovely craft without thinking of the old pop song of the 50s - "Red Sails in the Sunset."

Information courtesy of the Spirit of Buffalo website http://www.spiritofbuffalo.com/about.asp

Spirit of Buffalo was built by Rover Marine Lines. She sailed her first five seasons in the day sailing trade out of Lewis, Delaware, then transferred to Georgetown, South Carolina in 1997 where she sailed on the Winyah Bay.

In late fall of 2008 she was purchased by Buffalo Sailing Adventures and was brought from South Carolina to Baltimore. The winter was spent preparing here for her transit up the Hudson and through the Erie Canal to her new home, Buffalo. She arrived in Buffalo during the first week of May 2009.
Vessel Specifications
Year Built 1992
LOA 73' 0"
LOD 65' 0"
Beam 16' 0"
Draft 5' 11"
Displacement 68,000 lbs
Passenger capacity 42
Hull Construction Steel
The Company

Buffalo Sailing Adventures is a family owned and operated company established in December of 2008 operating out of Buffalo, New York. The Spirit of Buffalo is a 73 foot coastal sailing vessel which is the only square rigged, topsail schooner sailing out of the Historic Buffalo Harbor.

Ric and Kathy Hilliman started their passion for sailing as teenagers. Weekends were spent at Sherkston Beach, where they rented small sail boats.

While raising 3 children in Tonawanda their passion continued and they invested in their first sailboat, a hobie cat. They spent many weekends sailing the Lake Erie, the Kinzua Dam and Allegheny Reservoir with their 3 children.

Their next boat was a 32ft sloop which was kept at the Small Boat Harbor. During the summer their evenings and weekends were consumed by the waters of Lake Erie.

While studying for Ric's captains license, he volunteered on the Buffalo Fire Boat Edward Cotter. Serving as the captain of the Miss Buffalo, the Lockport Canal Boats and the Moondance were the focus of Ric's summers.

Later when the children were on their own, 1st Mate Kathy & Ric packed their bags and moved to Key West for a season. They both worked on Schooners similar to the Spirit of Buffalo. That season was the turning point of their lives. They bought Sea Dragon and have been sailing her during the winters for the last 6 years in the western Caribbean.

The Hilliman family is proud to bring the Spirit of Buffalo and their passion for sailing to Buffalo's Erie Canal Harbor - Central Wharf.

"As a family business, we take great pride in making your sailing experience a memorable one!"
Capt Ric Hilliman

Image Copyright � Lianne Schneider http://lianne-schneider.artistwebsites.com All rights reserved.
All images and my personal poetry/prose are protected by copyright and may not be reproduced, downloaded, distributed, transmitted, copied, reproduced in derivative works, displayed, published or broadcast by any means or in any form without prior written consent from the artist. Copyright on works derived from or based on images in the public domain applies only to the subsequent manipulation or painting resulting from my changes. The original image remains in the public domain and such images are used in accordance with international copyright laws.

Kiki Art, JRR(First Star Art) and Joe, I can't tell you how honored I am that you've chosen to feature this work in your wonderful groups DIGITAL ART AND FABULOUS FRACTALS, DIGITAL TOUCH and 4000 OR UP. Thank you so much.

Jeff and Chuck, my very deepest thanks for featuring this image in your wonderful groups - PLEASING THE EYE and SHIPS BOATS AND DINGHIES. I'm thrilled and honored.

Karen, Bob/Nadine (x2) and Taikan, I can't thank you enough for featuring this image in your wonderful groups - 5000 VIEWS PEOPLES CHOICE, THE GALLERIA OF INTERIOR DESIGN, ALL FINE ART AMERICA and THE BEST 30000 ARTWORKS. What an honor!

My deepest thanks to Naomi, Stefon, William and Dan for featuring this painting in these wonderful groups - WAITING ROOM ART, APPRECIATING WORKS FROM ALL MEDIUMS, ART WITH FLAIR and PREMIUM FAA ARTISTS. So thrilled and pleased.

I'm revisiting and really really like this one Lianne. So much so I featured on http://facebook.com/artists2c

Thank you all so very much for your kindness and support - it means so much and I hope I've returned your gracious gifts in kind with a visit to your work too.

Your technique is amazing and a real mystery to me. It looks like a lot of work goes into your work! v.

What a gorgeous image Lianne! I love your treatment of this beautiful shot :) v/f/t/g+!

What a fabulous work of art, Lianne!!! I love everything about it, but those red sails are what caught my eye first! f/v/t

She is a very pretty boat - those red sails catch the sunlight and look like fire floating across the lake. Thank you so much Sue.

Fantastic artwork, Lianne! (Now I have the song stuck in my head :) )

LOL Michael - well at least I didn't choose Flying Purple People Eater!!! So delighted that you like it!

Thank you so much Cheryl - I appreciate it.

This is an amazing digital art piece Lianne... I like it very much. :-) fv

What a lovely compliment Nick - thank you so very much.

Thank you Rosalie - I'm just delighted that you like it.

great composition, the red sails draw the focus to the boat beautifully v

Thank you so much Carl - yes she is a very pretty boat.

Thanks so much Catalina!!

Nicla - I almost missed it but I can't tell you how pleased I am that you chose to feature this in ART PROMOTION AND MARKETING. What an honor - thank you.

Bruce what a lovely surprise to find this featured in ALL THINGS ON THE ATLANTIC COAST. Such a treat and a huge honor. Thank you.

Robert thank you so very much for selecting this image to be featured in FAA FEATURED IMAGES. I'm really very honored.

Wonderful refreshing color story, in an image with so much depth! The division between colors, blue, off white, red and turquoise is highly attractive in your muted and textured presentation. V/F

The red on the sails and the blue water add so much to this beautiful shot Lianne... Love it!!! F/V.

Congratulations! This piece is featured in the group Art Promotion and Marketing v/p

So beautiful as always!! v

F/v52 How lucky you are to have flown cross the water on her decks! This is another image that is beyond beautiful, Lianne! Your work is so darn good!!!!

Lianne,Beautiful,wonderful history lesson. Must have been a fun ride. Thanks hun for comment. Hugs,Marsha FV

Wow, this is fabulous! I love the brilliant blue of the water against the red sails. Wonderful piece of work! v/f