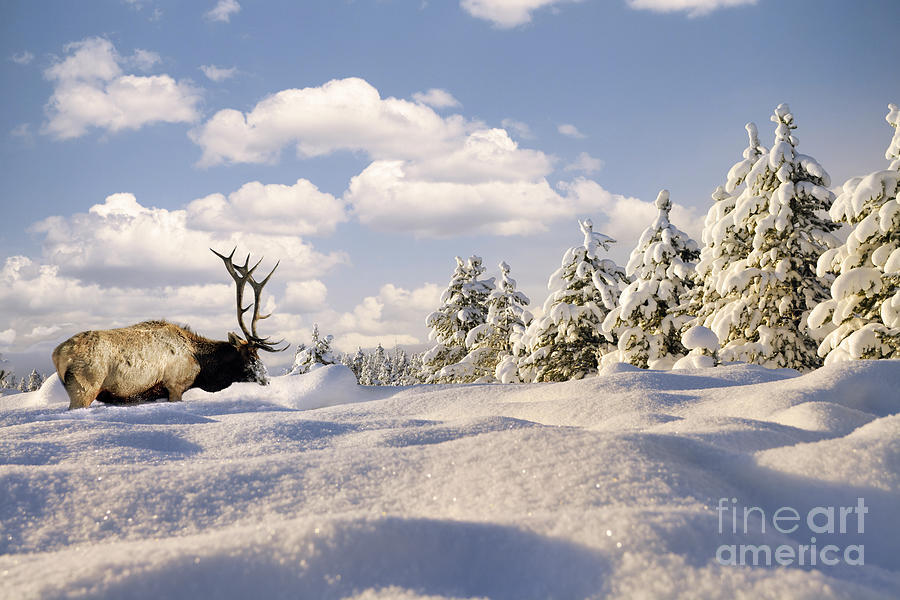 Snowed in elk,bull elk outside of Yellowstone. Bull elk lose their antlers each March. In Yellowstone there are six to seven herds, most of which winter at lower elevations outside the park. The largest elk herd winters along and north of the park’s winter boundary. YNP snowfall tends to be around 150 inches, and more in higher mountain elevations.
the North American Elk (Cervus elaphus) is also called the Wapiti,Each spring, male deer and elk begin
growing antlers from bony bumps on their skulls called pedicles.
Increasing daylight elevates the level of the hormone testosterone in the animal's blood, which
triggers the growth of antlers. Antlers begin as layer upon layer of cartilage that slowly mineralizes
into bone. They are light and easily damaged until they completely mineralize in late summer.
A soft covering called velvet helps protect the antlers and carries blood to the growing bone tissue.
If you look closely at a deer or elk antler, you'll see grooves and ridges on it. These mark the paths
of veins that carried blood throughout the growing antlers. The blood stops flowing to the antlers in
August, the antlers finish hardening, and the velvet falls off or is rubbed off. The hardened antlers
are composed of calcium, phosphorous and as much as 50 percent water.
An antler grows faster than any other kind of bone. It can grow up to 1 inch (2.5 cm) a day during the
summer. Biologists are studying antlers in the hopes of learning the secrets of rampant cell growth,
secrets that may unlock cures to various forms of cancer.
In the second year, a bull elk usually grows slim, unbranched antlers called spikes that are 10-20 inches
(25-50 cm) long. By the third year, antlers begin developing tines that branch from the main beam.
By the seventh summer, a bull's antlers may have six tines each, weigh as much as 40 pounds (18 kg),
and grow to a length and spread of more than four feet (1.2 m). Why would an animal need to carry
around a rack of antlers that weighs so much? A large rack identifies a bull that is successful in
finding food, lots of food.
A bull must consume huge amounts of nutrients to obtain the energy and minerals needed to grow antlers
as well as the energy to carry them around. Large antlers also identify a bull that is able to defend
himself against other bulls and against predators. This information is of great interest to female elk
(cows) because they will mate with the strongest, most successful males -- usually the bulls with the
biggest antlers.
Bull elk lose their antlers each March, but they begin to grow them back in May in preparation for the late-summer breeding season.

Fabulous image of this bull elk in the deep snow!

Congratulations! Your gorgeous work is featured on the home page of the quadruple-curated group, All Stars. Featured images are changed weekly. Please post your featured image in the discussion thread titled Feature Archives 2021 so it remains visible for fellow artists and potential buyers to enjoy later.

Thank you very much for featuring my image called Snowed in Elk in the group All Stars!

Thank you very much for featuring my image called Snowed in Elk in the group Images That Excite You!

Thank you very much for featuring my image called Snowed in Elk in the group The Outdoor Photographer !

Thank you very much for featuring my image called Snowed in Elk in the group Wisconsin Flowers and Scenery !