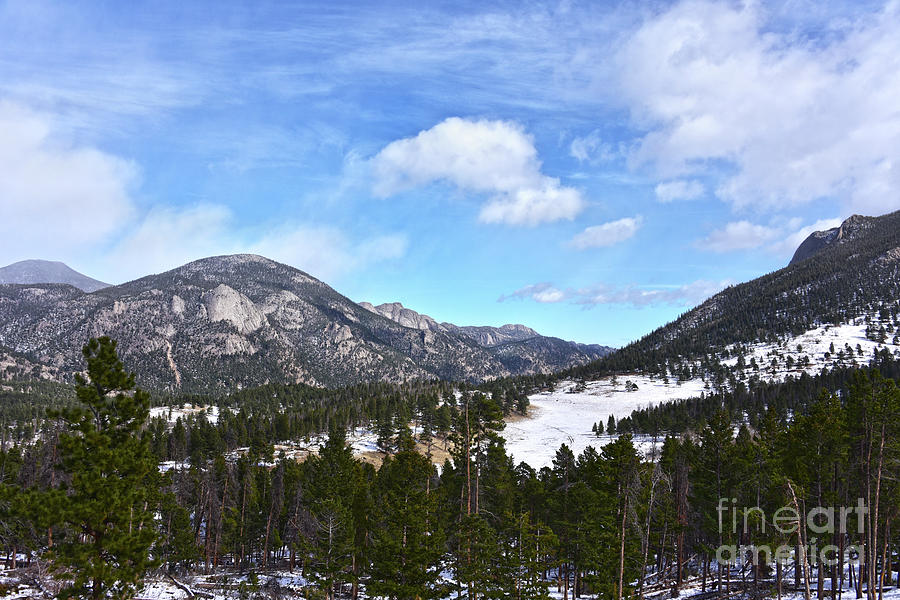 Snowfall dusts Rocky Mountain National Park, Colorado, on an early November day. This is a view heading west toward Trail Ridge Road, which crosses the park.

Rocky Mountain National Park is an American national park located approximately 76 mi (122 km) northwest of Denver International Airport[5] in north-central Colorado, within the Front Range of the Rocky Mountains. The park is situated between the towns of Estes Park to the east and Grand Lake to the west. The eastern and western slopes of the Continental Divide run directly through the center of the park with the headwaters of the Colorado River located in the park's northwestern region.[6] The main features of the park include mountains, alpine lakes and a wide variety of wildlife within various climates and environments, from wooded forests to mountain tundra.

The Rocky Mountain National Park Act was signed by President Woodrow Wilson on January 26, 1915, establishing the park boundaries and protecting the area for future generations.[3] The Civilian Conservation Corps built the main automobile route, Trail Ridge Road, in the 1930s.[3] In 1976, UNESCO designated the park as one of the first World Biosphere Reserves. The park is one of the most visited in the National Park System, ranking as the third most visited national park in 2015.

Rocky Mountain National Park is one of the highest national parks in the nation, with elevations from 7,860 to 14,259 feet (2,396 to 4,346 m), the highest point of which is Longs Peak. Trail Ridge Road is the highest paved through-road in the country, with a peak elevation of 12,183 feet (3,713 m). Sixty mountain peaks over 12,000 feet (3,658 m) high provide scenic vistas. On the north side of the park, the Mummy Range contains a number of thirteener peaks, including Hagues Peak, Mummy Mountain, Fairchild Mountain, Ypsilon Mountain, and Mount Chiquita.[ Several small glaciers and permanent snowfields are found in the high mountain cirques.

The park lies within Larimer, Grand and Boulder counties.