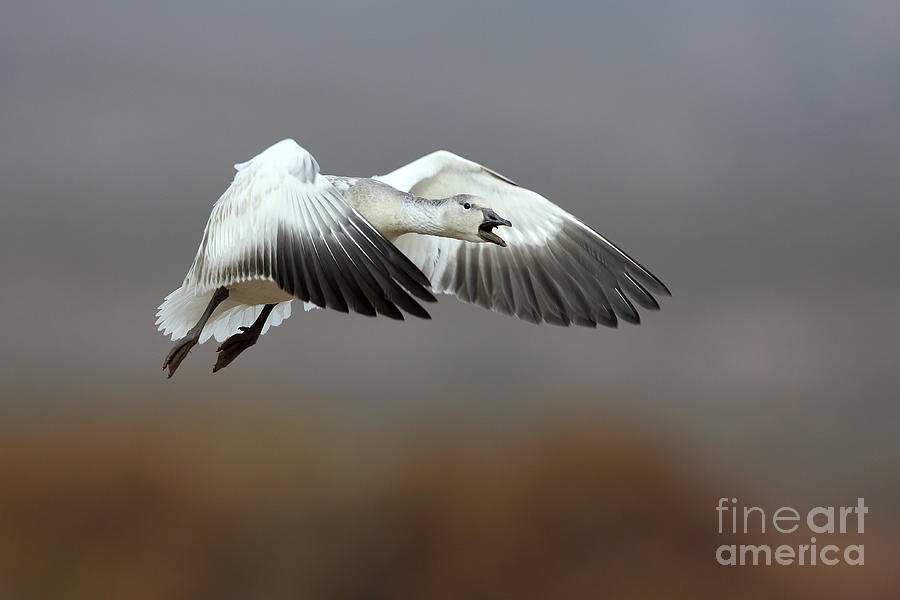 Snow Goose in flight, Bosque del Apache, New Mexico. Snow Goose the Snow Goose (Chen caerulescens), also known as the Blue Goose, is a North American species of goose. Its name derives from the typically white plumage. The genus of this bird is disputed. The American Ornithologists' Union and BirdLife International place this species and the other "white geese" in the Chen genus, while other authorities follow the traditional treatment of placing these species in the "gray goose" genus feral breeder. Snow Geese are visitors to the British Isles where they are seen regularly among flocks of Barnacle, Brent and Greenland White-fronted geese. There is also a feral population in Scotland from which many vagrant birds in Britain seem to derive. Outside of the nesting season, they usually feed in flocks. In winter, snow geese feed on leftover grain in fields. They migrate in large flocks, often visiting traditional stopover habitats in spectacular numbers. Snow Geese often travel and feed alongside Greater White-fronted Geese; in contrast, the two tend to avoid traveling and feeding alongside Canada Geese, which are often heavier birds. Long-term pair bonds (they mate for life) are usually formed in the second year, although breeding does not usually start until the third year. Females are strongly philopatric, meaning they will return to the place they hatched to breed.
This goose was in flight over the planted corn at Bosque del Apache New Mexico.

Beautiful flight photograph of a Snow Goose with great pose, timing, clarity, perspective, and composition, Bryan! Congratulations on your photo being selected by Dawn as a weekly Dawn's Delights! F/L

Congratulations! You are one of 10 Dawn’s Delights for 5/4/2021!! This fine image of an identified wild bird is now featured on the homepage of Wild Birds Of The World - A Nature Photography Group. Please take a moment to add it to the 2021 Features Archive and Thanks discussion for additional visibility.

Congratulations, your work is Featured in "Coastal Water Birds-Shore Birds" I invite you to place it in the group's "2019 Featured Image Archive" Discussion!!