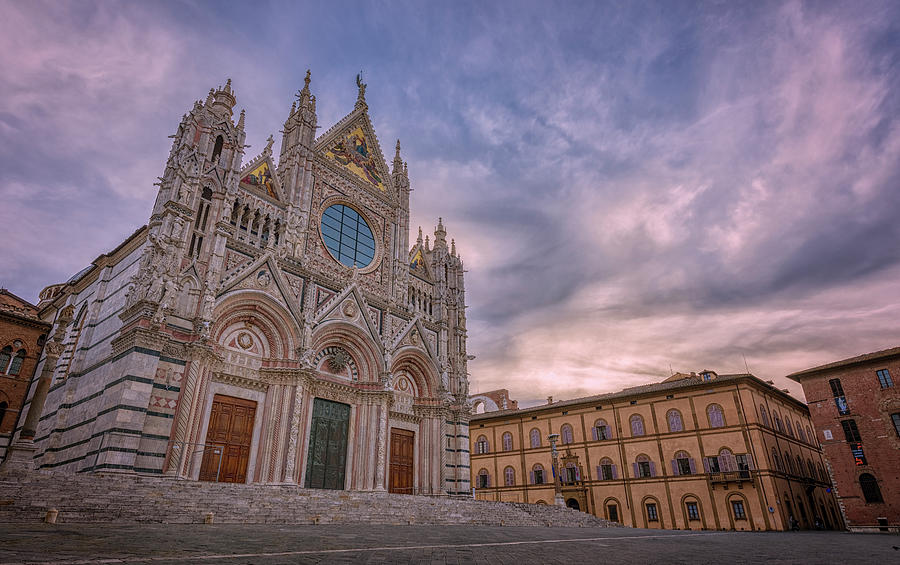 Mobbed by midday, the piazza in front of the cathedral in Siena Italy is very quiet as the day breaks. Siena Cathedral (or Duomo di Siena, or Duomo of Santa Maria Assunta) is a medieval church in Siena, Italy, dedicated from its earliest days as a Roman Catholic Marian church, and now dedicated to the Assumption of Mary. The cathedral was originally designed and completed between 1215 and 1263 on the site of an earlier structure. The exterior and interior are constructed of white and greenish-black marble in alternating stripes, with addition of red marble on the facade. The main entry facade is unique in that it contains elements of Tuscan Romanesque architecture (the rounded arches at the bottom), early Gothic architecture (the pointed arches just above) and late Gothic architecture in a more flamboyant style (the frilly top half).

FEATURED PHOTO, The Road to Self Promotion group, 8/14/17

thank you Nader for the feature in the Fine Arts Professionals group, 10/1/17

Skies tha speak to us!

Love the angle and those dramatic clouds!

Lovely! I would love to visit!

thank you Karen, that it is!

Beautiful! Makes me think of a sand castle the way that it is set up on the stonework.