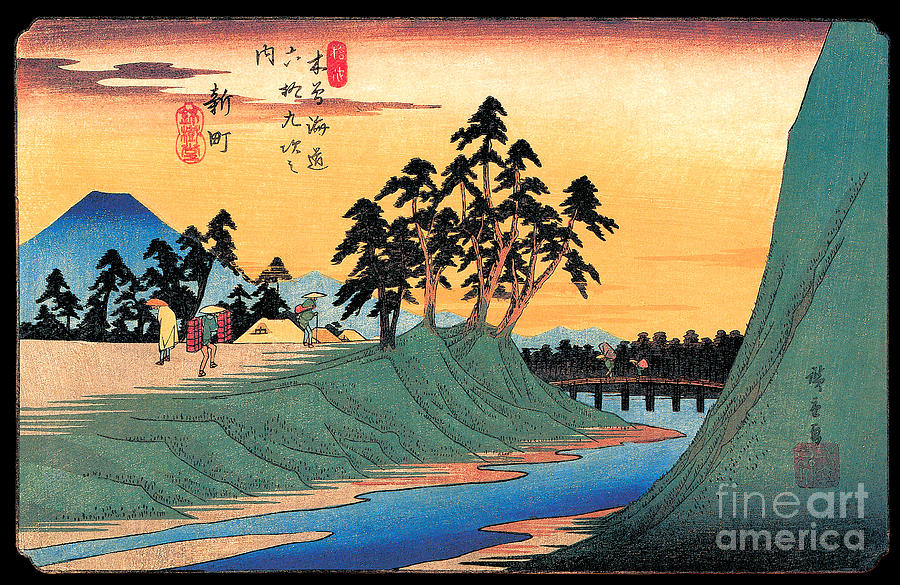 Shinmachi, Utagawa Hiroshige Japanese 1797 – 1858, was a Japanese ukiyo-e artist, considered the last great master of that tradition. Hiroshige is best known for his horizontal-format landscape series The Fifty-three Stations of the Tokaido and for his vertical-format landscape series One Hundred Famous Views of Edo. The subjects of his work were atypical of the ukiyo-e genre, whose typical focus was on beautiful women, popular actors, and other scenes of the urban pleasure districts of Japan’s Edo period (1603–1868). The popular series Thirty-six Views of Mount Fuji by Hokusai was a strong influence on Hiroshige’s choice of subject, though Hiroshige’s approach was more poetic and ambient than Hokusai’s bolder, more formal prints. Subtle use of color was essential in Hiroshige’s prints, often printed with multiple impressions in the same area and with extensive use of bokashi (color gradation), both of which were rather labor-intensive techniques.
Shinmachi (新町) was a yūkaku (遊廓、遊郭, pleasure quarter, courtesan's district) in Osaka, built between 1615 and 1623, and operating until its destruction in World War II. It was situated roughly two kilometers southwest of Nakanoshima. Today, it is mostly a tourist attraction and historical site.
Throughout the Edo period (1603–1868), there was widespread male and female prostitution throughout the cities of Kyoto, Edo, and Osaka. The Tokugawa shogunate attempted to control this by restricting prostitution to designated city districts, known as yūkaku. These districts were Shimabara in Kyōto (est. 1640), Shinmachi in Osaka (est. 1624–1644) and Yoshiwara in Edo (est. 1617). These restrictions and controls did not derive from a moral opposition to prostitution, but out of a desire to compartmentalize certain types of activity within the cities. Kabuki and jōruri theatres, and other related entertainment establishments were similarly controlled.