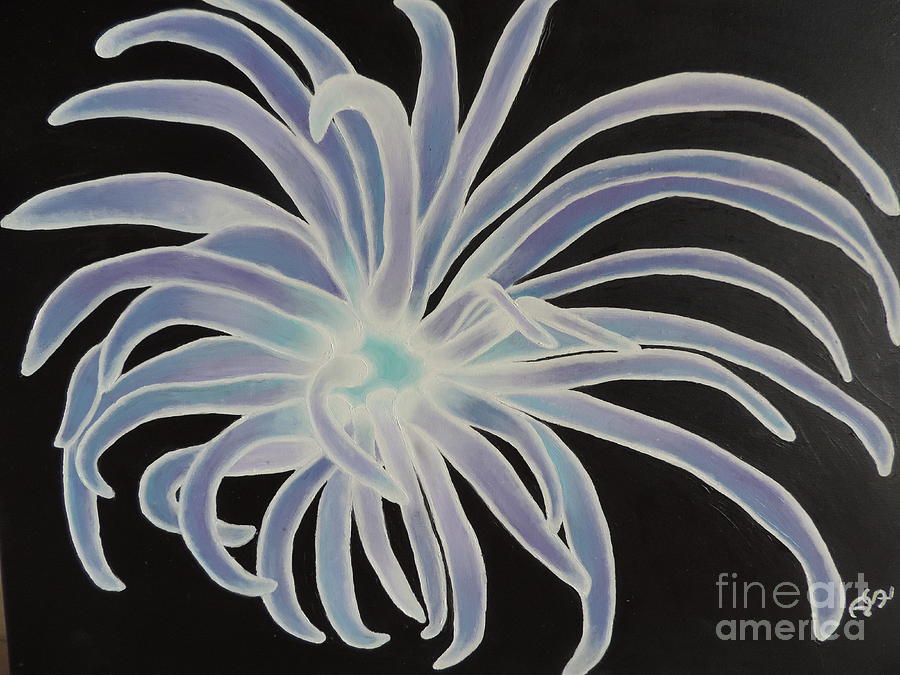 Translucent sea anemone on black background
Facts;...
The sea anemone ( uh-nem--uh-nee),is named after the equally flashy terrestrial anemone flower.
They spend most of their time attached to rocks or coral on the sea bottom, waiting for fish to pass close enough to get ensnared in their venom filled tentacles.
The tentacles are triggered by the slightest touch, filling a harpoon like filament into their victim and injecting a paralyzing neurotoxin. The prey is then guilded into the mouth by their tentacles.
There are more than 1,000 species of sea anemone found throughout the worlds oceans at various depths. The largest and most varied are found in tropical waters.
They can be as small a 1/2 an inch or as large as 6ft. across.
Some anemones like their coral cousins establish symbiotic relationships with green algae.
In exchange for providing the algae with safe harbor and exposure to sunlight, the anemone receives oxygen and sugar, the big products of the algae photosynthesis.
They also form another, more famous symbiotic alliance with clownfish which are protected by a mucus layer that makes them immune to the anemone's sting.
Clownfish live within the anemones tentacles, getting their protection from predators while the anemone snacks on the scaps left by the cownfish's meals.

Looks great to me. Love all you do and this is a BIG winner. FAVORITE L/F

Congratulations on the features for this gem Dianna! This is a beautiful work of art! FAVORITE!

Many thanks for the feature Elsa 😊

I love this Dianna, L/F

Many thanks for the feature Naomi :)

Many thanks for the feature Elsa :)

Thanks so much for the feature Navin :)

Thankyou so much for the many features Diane :)

Many thanks for the feature Bruce ;)

Many thanks for the feature Christina :)

Thanks Maureen. This is actually one of my earlier works. I'm glad you like it :-)

wow sis you just keep getting better all the time, its so lifelike just wow.

Thanks so much for your lovely comments Henryk and Mitch. Much appreciated.

Wow! Thanks so much Phillips.

This is stunning work, my favorite of yours. L/F

Thanks for adding this to your favorites Sue. I feel honered.

Thanks for favoriting Annjo. Its an honor.

Wonderful colors and movement, Dianna. I very much like this. f/l

Sincere thanks to "Music of the heart"

This sea anemone is stunning, Dianna, against the black background. Love the transparent, delicate feel to the anemone and love the blue tones! wonderful!

Thankyou Svetlana, much appreciation to you :-)