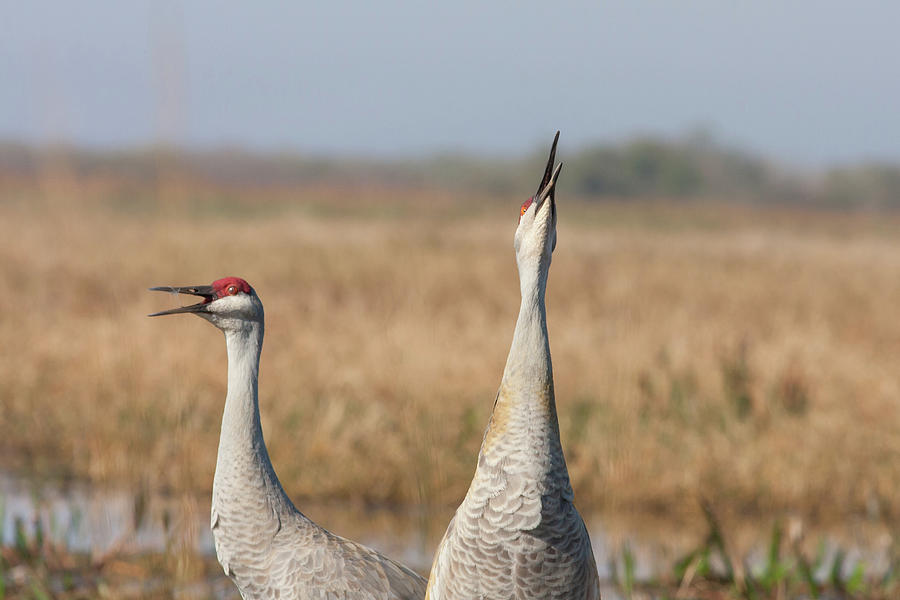 A pair of sandhill cranes standing in wetlands and calling out to more cranes flying overhead.

This image has been featured in the following groups:
A Birding Group - Wings,
Birds in Focus,
Wild Birds Of The World - Photography &
Wildlife One A Day

These are large birds of open grasslands, meadows and wetlands, that can also sometimes be seen in residential areas and on roadsides.
Two subspecies of sandhill cranes can be found in Florida. A population of about four to five thousand non-migratory Antigone canadensis - subspecies pratensis - live year round in Florida and south Georgia. These Florida sandhill cranes are state listed as threatened. A larger population of greater sandhill cranes spends winters in Florida and summers in the Great Lakes region. The two subspecies are indistinguishable from each other.
Sandhill cranes have gray bodies, red foreheads and white cheeks. They are up to 120cm (~4 ft.) tall with a wingspan of 200 cm (~ 6-1/2 ft.). Males and females are similar to each other, with the males being slightly larger. Mated pairs remain together year-round.
(Subject description from the artist's Wild Florida Photo website www.wildflphoto.com)

Congratulations Paul, your work is Featured in "Birds In Focus" I invite you to place it in the group's "2017 Featured Image Archive" Discussion!! L/Tweet

Congratulations Paul, your work is Featured in "A Birding Group - Wings" I invite you to place it in the group's "2017 Featured Image Archive" Discussion!! L/Tweet

Fantastic natural scene, Paul! Superb! Your beautiful image has been featured by Wild Birds Of The World. L/F