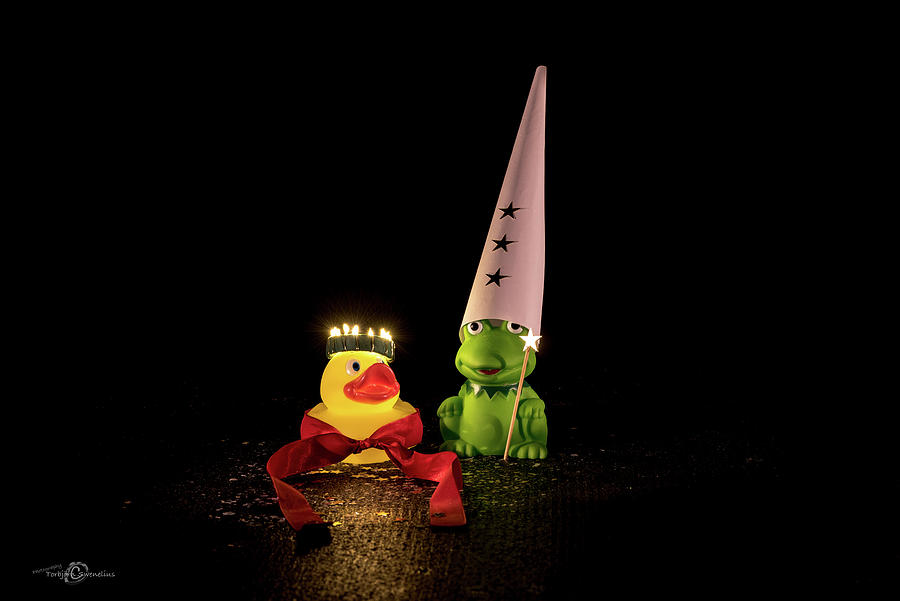 Saint Lucy’s Day is celebrated most commonly in Sweden. Here symbolised by the baby toys with the duck as Saint Lucy and the frog as the star boys (Saint Stephen). In Sweden, Denmark, Norway, and Finland, Lucy (called Lucia) is venerated on 13 December in a ceremony where a girl is elected to portray Lucia. Wearing a white gown with a red sash and a crown of candles on her head, she walks at the head of a procession of women, each holding a candle. The candles symbolize the fire that refused to take St. Lucy's life when she was sentenced to be burned. The women sing a Lucia song while entering the room, to the melody of the traditional Neapolitan song Santa Lucia; the Italian lyrics describe the view from Santa Lucia in Naples, the various Scandinavian lyrics are fashioned for the occasion, describing the light with which Lucia overcomes the darkness. Each Scandinavian country has lyrics in their native tongues. After finishing this song, the procession sings Christmas carols or more songs about Lucia.
Boys take part in the procession, playing different roles associated with Christmas. Some may be dressed in the same kind of white robe, but with a cone-shaped hat decorated with golden stars, called stjärngossar (star boys); some may be dressed up as "tomtenissar" (Santa's elves), carrying lanterns; and some may be dressed up as gingerbread men. They participate in the singing and also have a song or two of their own, usually Staffan Stalledräng, which tells the story about Saint Stephen, the first Christian martyr, caring for his five horses.

A charming portrayal of celebration of St Lucia!

Thank you so much Kay for your very nice comment and choice of favorite!

Such a sweet picture!

Thank you so much Nicklas for your very nice comment and choice of favorite!

My name is Erin, please contact me on my email (eringdeng101@hotmail.com) i have something very important to tell you.

Cute image and interesting story with it :) Liked

Thank you so much Marija!

Thank you so much Doug Norkum for the feature in the FineArtAmerica-group "Nikon Full Frame Cameras"!