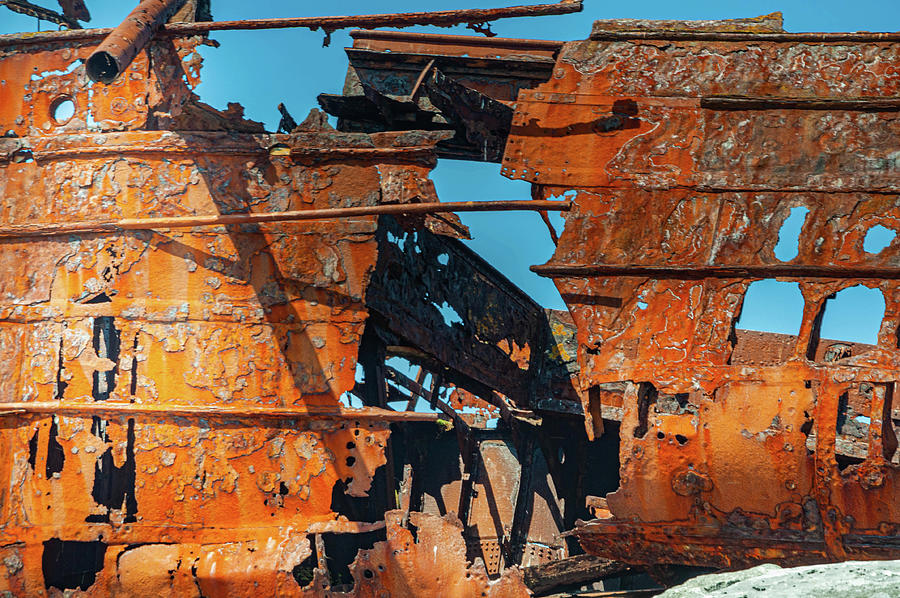 The remains of this Irish shipwreck glisten in the sunshine. It is located on the Eastern side of the island of Inisheer, which is one of the three Aran islands off the west coast of Ireland.

In 1960 on a dark stormy night a freighter, called the MV Plassey was washed ashore on the Island. The Islanders quickly gathered to the wreck to rescue those on board and to salvage what they could from the battering sea. The ship carried many goods that had never been seen before on the island, including biscuits, cookies, and even modern day toilets. Several items, such as Wheels, Compasses, Pieces and various parts of the Ship were taken by many as souvenirs and reminders of the rare event.

The Ship Wreck is perhaps most well-known for its appearance, on the foreshore of 'Craggy Island', in the opening credits of the extremely popular BBC series, Father Ted. The series is a comedy which follows the parochial life of a Priest and his company in Rural Ireland. A series that was filmed in many areas of County Clare and is celebrated throughout the year with several Father Ted Festivals on Inis Mór, and in Kilfenora, County Clare.

Kim, thank you for the feature in the Symbolism in Photography group!

Mahesh, thank you for the feature in the Art and Meditation group!

Cool closeup of the details!

Sad but a great image

Amazing textures on this rusted out remnant of the ship!

Doug, thank you for the feature in the Light Marvels group!