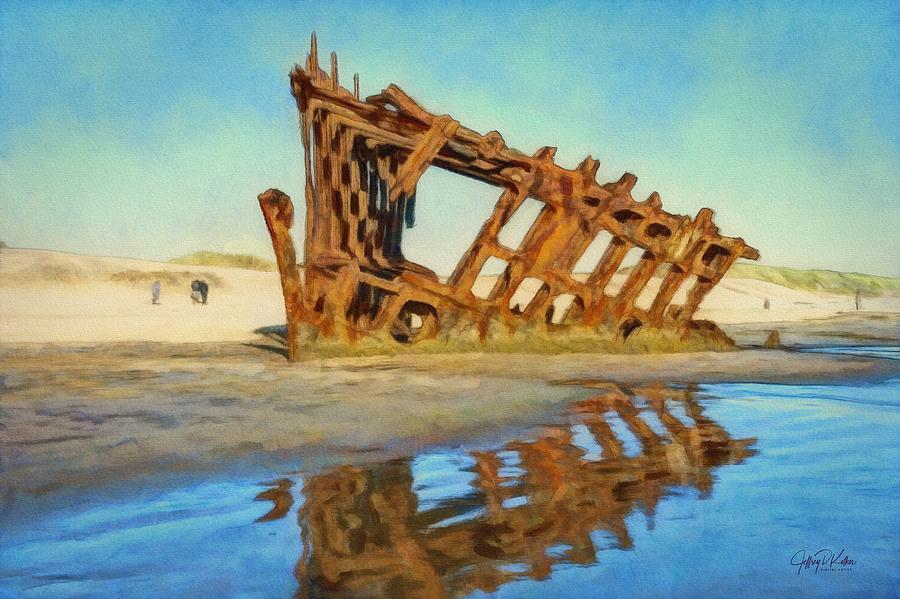 This is the remains of the Peter Iredale, a ship that ran around the coast of Oregon in 1906. It was saling from Salina Cruz, Mexico to Portland Oregon when bad beather caused the wreck. No one was injured, but the boat was left to its own devices since it became embedded in the sand.

The rusted remains are still there today, and are incorporated into Fort Stevens State Park, near Hammond Oregon. It's a popular tourist site, as I can apparently testify. While we were there, some parents were letting their kids climb all over this thing.

My first though: "Is tetanus still a thing?"

Second though: "Is that actually safe?" I'm sure there are many ways to get cut from these ruins. I know I wouldn't have let my kids climb on it, and I KNOW my mother wouldn't have allowed it.

Captain Lawrence (captain when wrecked) supposedly said this to/about the boat: "May God bless you and may your bones bleach in the sands". Rusting... close enough.

Jeff, this is a fabulous image.

Yes, so true. And of course, they run up to it right as I was taking pictures, and the parents just looked at me and smiled. Luckily for everyone, I'm not a violent person.

That's an interesting structure, Jeff. Not a typical beach scene but very cool.

It's almost surreal to go to the beach and see that thing just ... there.