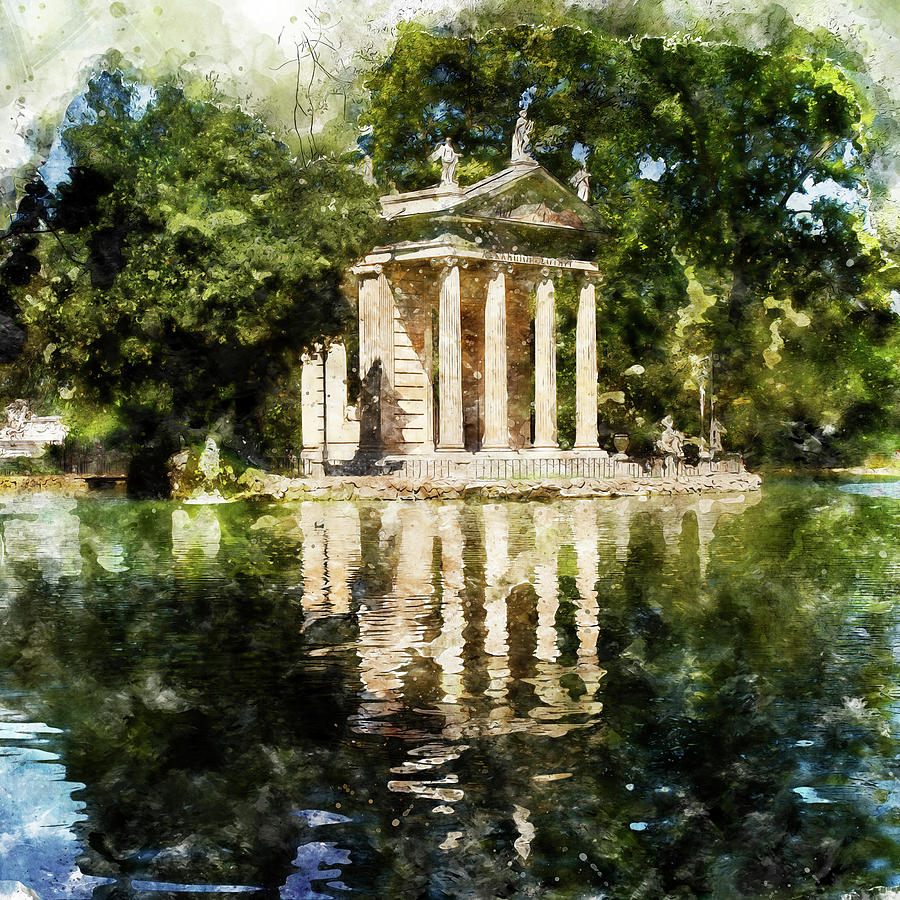 The magic of the Villa Borghese gardens in Rome, a timeless place in the marvelous eternal city, where classical art meets nature, as if time had stopped for centuries, without ever flowing.
Villa Borghese is a large park in the city of Rome that includes green-like accommodation of different types, from the Italian garden to the large areas of English style, buildings, small buildings, fountains and ponds.
It is the fourth largest public park in Rome (about 80 hectares), after the Appia antica Regional Park, Villa Doria Pamphilj and Villa Ada and extends largely over the Pinciano district and a small part on the Campo Marzio district, divided by the Walls Aurelian.
In this artwork, perfect for the living room of lovers of Rome and classical art, you can admire the temple of Esculapio, in an artificial island of the lake located in the Garden of the Lake at Villa Borghese (Rome).
This is a small temple in Ionic style built between 1785 and 1792 by Antonio and Mario Asprucci (father and son) and by Cristoforo Unterperger and dedicated to the god of medicine. According to the original intentions of the builders, there was only the construction of an architectural prospect to house the statue of Aesculapius, brought to light near the ruins of the Mausoleum of Augustus: it was only after it was decided to build a small isolated temple.
Aesculapius is a character from Greek mythology. Son of Apollo and Arsinoe according to Hesiod, or of Apollo and Coronis for Pindar, he is a demigod and therefore mortal man for Homer, was said to have been learned in medicine by the centaur Chiron, or that he had inherited this property from his father Apollo. He then became the god of medicine, like his father, and was a deity greatly adored by the people, as benevolent with the sick; the constellation of the Ophiuchus represents its myth.

A Stunning Photo. Stunning Composition. Congrats on the sale.