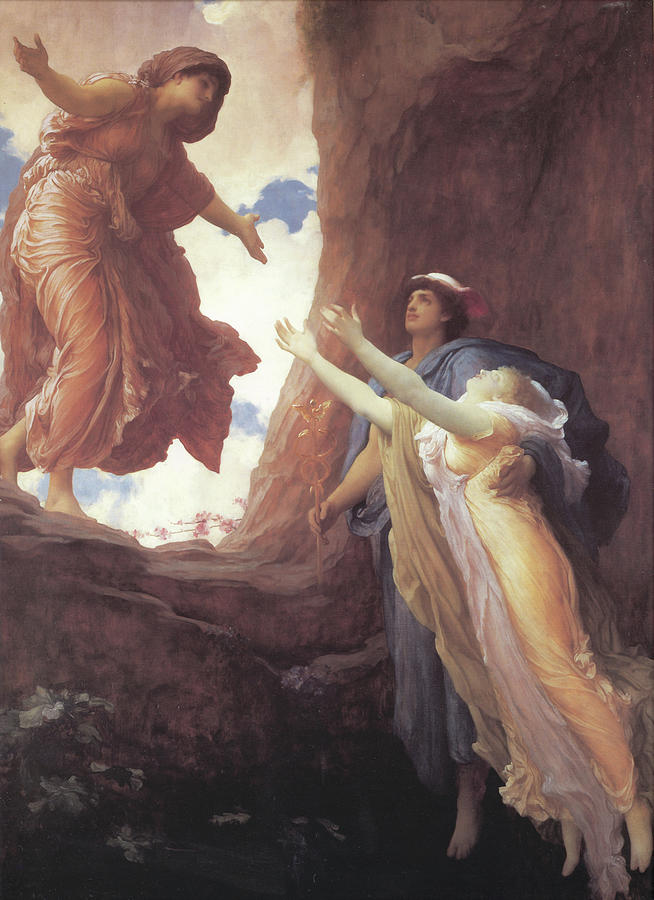 A reproduction of Lord Frederic Leighton’s “Return of Persephone” of about 1891. In this portrayal of a central myth of Greek and Roman religion, we see Hermes, Mercury to the Romans, bringing the Daughter back from the depths of Hades to her waiting mother Demeter, known to the Romans as Ceres. Persephone had been abducted by Hades to become Queen of the Dead and her mother mourned for her turning the Earth barren and cold, the season to be known as Winter. The daughter was redeemed but, having eaten pomegranate seeds, had to return each year to her husband which explains the annual return of Winter. The original work is in the Leeds Museum, Leeds, England.
Frederic Leighton was born in 1830 in Scarborough, England and did not study art until after attending University College School in London. He studied on the continent, notably in the Accademia di Belle Arti in Florence in 1854. He was in Paris between the ages of twenty-five to twenty-nine and there met Ingres, Delacroix, Corot and Millet. He returned to London where he joined the Pre-Raphaelites and began to create sculptures as well as paintings. A great success, he was knighted when aged fifty-eight and was created Baron Leighton in 1896. He died the next day. As a bachelor, he left no children and his home became the Leighton House Museum.