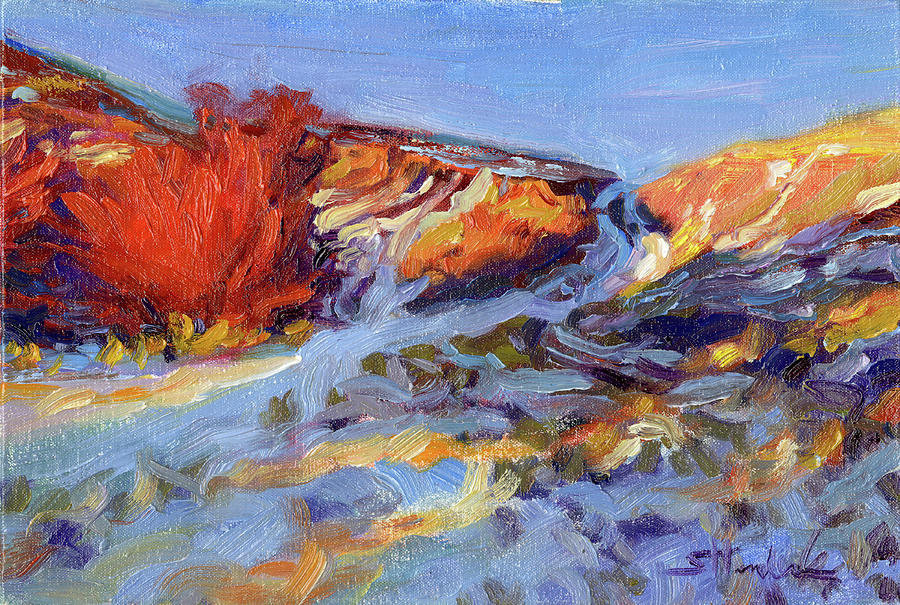 A blaze of red set against a blue sky and golden fields, contrasts with winter's snow in the crevices.

Redbush, the artwork, incorporates a little bit of abstract, a little bit of representational, and a little bit of impressionism in a late spring landscape of rocks, emerging grass, and melting snow. This is the time of year that transitions from one season to the next – sunlight during the afternoon is warm and embracing, but when that sun goes behind the clouds, then the coolness of late winter reasserts itself, and we realize it’s not quite time yet to put out the bedding flowers (that is, of course, unless we don’t mind re-buying them several weeks from now, when spring actually arrives).

Redbush invites the viewer on a country walk along gravel roads, where just above the path a blaze of color from last year’s autumn change hangs on, having never yet let winter’s cold fully denude the bush. There is a sense of tenacity and toughness brought about in Redbush, a reflection of nature and how the plants and animals cope with the seasons.

Because this is out of in the country, the melting snow is not sullied and dirtied with car exhaust, and the mud of tire tracks and tromping feet. High on the incline, the snow maintains its pristine white color, changing only in texture from the fluffy white mass of new snow to the denser, icier crystals resulting from melting and re-freezing.

The color is ablaze – the red bush’s lingering leaves set against the white of the snow, the tan of the rocks, and the blue of the sky – which is another reminder for us – that nature is colorful indeed, and is no slave to home industry demands that we focus on neutral tones this year, then soft blues a few years from now, then urban chrome after that. Nature sets her own standards, and invites us to join in the joy of seeing them.

Congratulations on your Top Finish in the contest… ANYTHING ABSTRACT FROM SUBTLE TO BOLD! Fl

Congratulations on your top finish in the Colorful Nature Abstracts contest! voted

I love these wide and free brush strokes and bluish shadows and play of colors. l/f/pin/tw

Congratulations Steve on your feature in the group OBSESSED Painters Paintings

Congratulations your beautiful work is being featured in An Image Inspiring Meditation :-)

Congratulations on being featured in the FAA Group ‘Promote Your Work Here and Get Noticed.' To ensure your feature remains available over time, post your featured image(s) in the Group's 'Thanks for the Feature / Image Archive.’ If you allow pinning, your image will be pinned to the Group’s features board (www.pinterest.ca/tendrelimages/promote-your-work-here-get-noticed)

Beautiful and Congrats on your sale!!

A departure in your work, and most thought provoking !

I love the confluence of different styles!

Love the movement and colors

A beautiful partnership of warm and cool! L/F

One of your peers nominated this image in the 1000 views Groups nominated images by your fellow artist in the Special Features #11 promotion discussion. Please visit and pass on the love to another artist.

So cool Love your color choices !