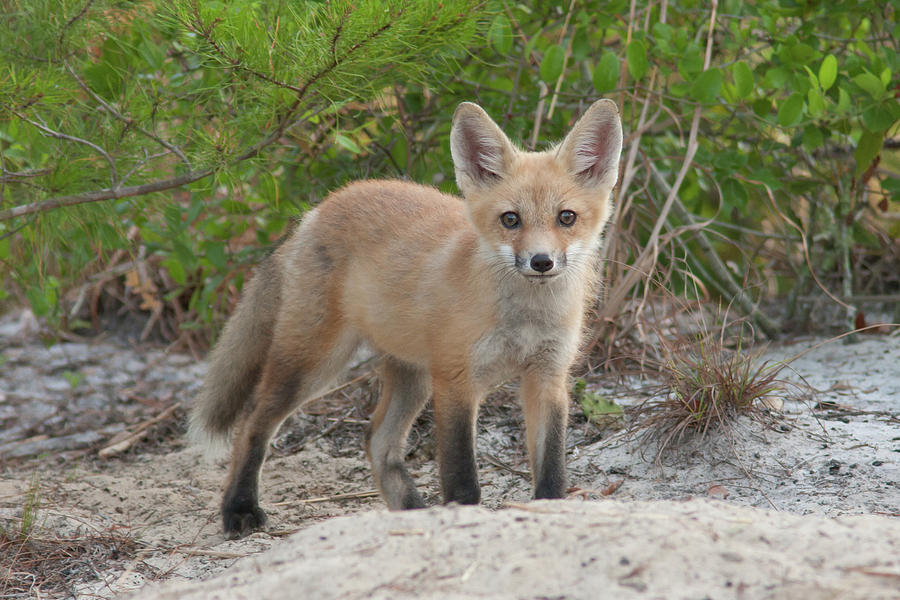 An Eastern red fox kit standing next to the mound at an entrance to the den.

The size of a small dog, these foxes were probably only native to the panhandle. They have recently expanded into peninsular Florida, but not into south Florida. Red foxes can be found throughout North America, except for the southwest, great plains and some of the southeast coastal regions. Their habitat is typically woods, open fields, or the transition zone in between, almost always near some source of water.
Adults are typically around a meter (3 ft.) long, with a third of that being the tail. Red foxes have long pointed ears and muzzle and relatively long legs. They have white to dull gray underparts, with the body shading from yellow-red to darker red, the lower legs and feet are always black and the tip of the tail is white. Adults weigh from 3.5 - 4.6 kg (7-3/4 to 10 lbs.).
After mating in the early part of the year, the female, known as a vixen, will prepare one or more dens, sometimes utilizing one dug by other animals. The vixen gives birth in the spring, staying in the den with the pups, which are also called kits, for the first several weeks after birth, during which time the male provides food for the female. Litters average five kits, but can be from one to seventeen.
The North American red foxes are often divided into ten subspecies, with Vulpes vulpes fulva being the only one occurring in Florida. While there were red foxes on the continent before Europeans arrived, the British did bring European species over to the colonies for hunting. The current species are likely related to both the native and the imported foxes.
(Subject description from the artist's Wild Florida Photo website www.wildflphoto.com)