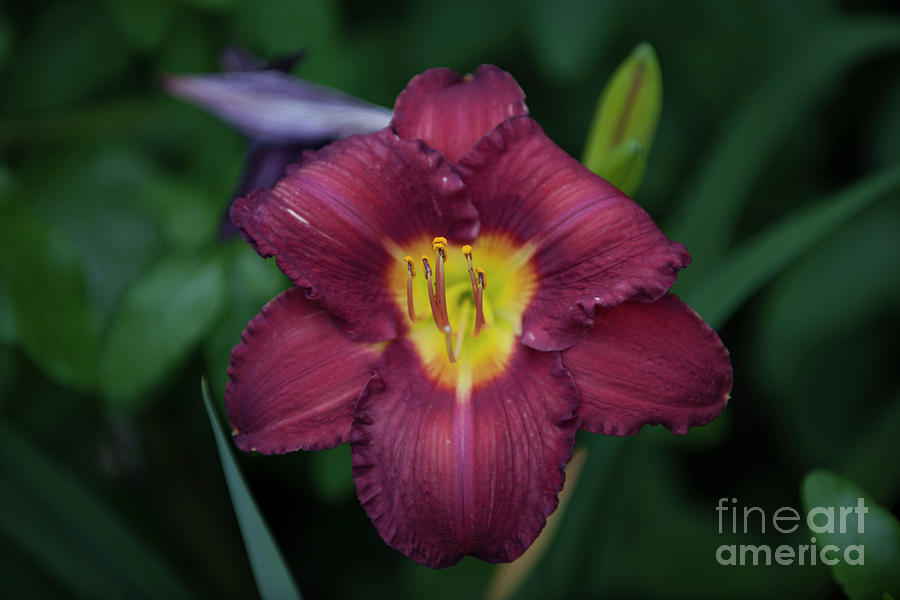 A daylily is a flowering plant in the genus Hemerocallis /ˌhɛmᵻroʊˈk�lɪs/.[2] Gardening enthusiasts and professional horticulturalists have long bred daylily species for their attractive flowers. Thousands of cultivars have been registered by local and international Hemerocallis societies.[3] Hemerocallis is now placed in family Xanthorrhoeaceae, subfamily Hemerocallidoideae, but used to be part of Liliaceae (which includes true lilies).

Daylilies are perennial plants, whose name alludes to the flowers which typically last no more than 24 hours. The flowers of most species open in early morning and wither during the following night, possibly replaced by another one on the same scape (flower stalk) the next day. Some species are night-blooming. Daylilies are not commonly used as cut flowers for formal flower arranging, yet they make good cut flowers otherwise as new flowers continue to open on cut stems over several days.

Hemerocallis is native to Eurasia, including China, Korea, and Japan, and this genus is popular worldwide because of the showy flowers and hardiness of many kinds. There are over 60,000 registered cultivars. Hundreds of cultivars have fragrant flowers, and more scented cultivars are appearing more frequently in northern hybridization programs. Some cultivars rebloom later in the season, particularly if their capsules, in which seeds are developing, are removed.

Most kinds of daylilies occur as clumps, each of which has leaves, a crown, flowers, and roots. The long, linear lanceolate leaves are grouped into opposite fans with arching leaves. The crown is the small white portion between the leaves and the roots. Along the scape of some kinds of daylilies, small leafy "proliferations" form at nodes or in bracts. A proliferation forms roots when planted and is often an exact clone of its parent plant. Many kinds of daylilies have thickened roots in which they store food and water.

A normal, single daylily flower has three petals and three sepals, collectively called tepals, each with a midrib in either the same or a contrasting color. The centermost part of the flower, called the throat, usually is of a different color than the more distal areas of the tepals. Each flower usually has six stamens, each with a two-lobed anther. After successful pollination, a flower forms a capsule (often erroneously called a pod).

The Tawny or Fulvous Daylily (Hemerocallis fulva) is invasive in some parts of the United States, such as in Wisconsin (Wisconsin Department of Natural Resources). People[who?] sometimes plant the Fulvous Daylily and other stoloniferous daylilies, which have underground runners. These kinds can overrun one's garden and can take an appreciable amount of time and effort to confine or remove.