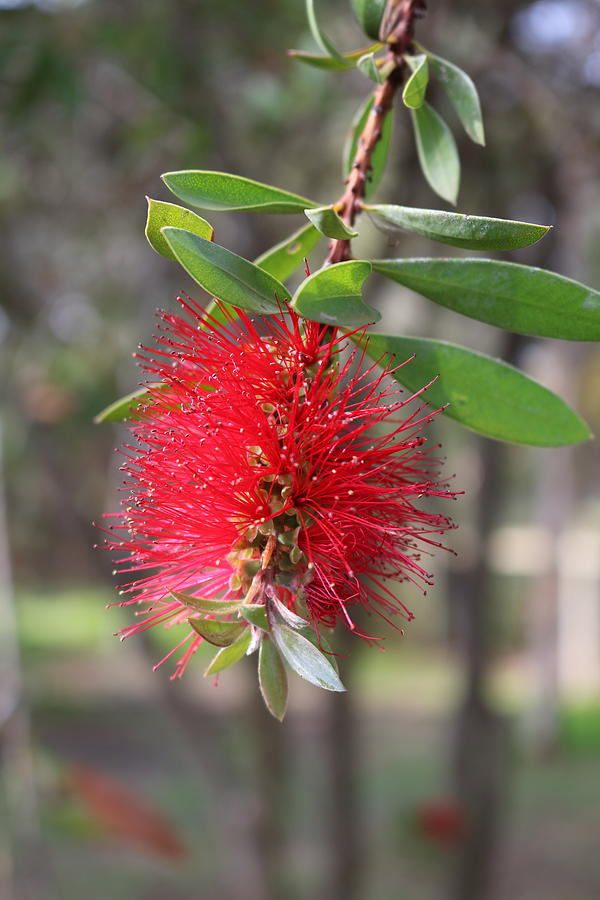 Callistemon is a genus of shrubs in the family Myrtaceae, first described as a genus in 1814. The entire genus is endemic to Australia but widely cultivated in many other regions and naturalised in scattered locations. Their status as a separate taxon is in doubt, some authorities accepting that the difference between callistemons and melaleucas is not sufficient for them to be grouped in a separate genus.

Callistemon species have commonly been referred to as bottlebrushes because of their cylindrical, brush like flowers resembling a traditional bottle brush. They are mostly found in the more temperate regions of Australia, especially along the east coast and typically favour moist conditions so when planted in gardens thrive on regular watering. However, two species are found in Tasmania and several others in the south-west of Western Australia. At least some species are drought-resistant and some are used in ornamental landscaping elsewhere in the world.

Thank you Lucinda and for the l/f

Really delightful! I love the simple composition and the shout out Red. Congratulations on your well deserved Features Michaela LF

Congratulations! Your image is now featured on the home page of The Best Of Down Under – Australia! Feel free to add your image to the Featured Images Archive 2020 discussion thread for prolonged exposure. LF

I really like these flowers. A lovely picture - congratulations on your features, and a like and a favourite

It is with great pleasure that I announce to you a big congratulations for this chosen piece of your artwork to be on special display on the homepage of our community of friends and fine artists, in our Wisconsin Flowers and Scenery group. I appreciate your activity in our group and want to thank you so much for being an active participant in helping promote other fine artists within the group. Usually in turn, such promotions bring promotions of your artwork into perspective and are featured on our homepage. One good turn deserves another. Your quality, definition, character, and variation in your works bring about a visual pleasure to view and share with others. Thanks for your participation in our family of friends and fine artists in our WFS group.

Beautiful Michaela. We have a related tree here, Ohia (Metrosideros polymorpha). Because of brilliant red color of some types here, they are seen as the personifcation of our lava goddess, Pele. I have also seen them on the slopes of a volcano on Tanna Island in Vanuatu.

Oh how lovely, I will look at your portfolio to see if you have one there

A beautiful flower! I love the contrast between the red and the green!