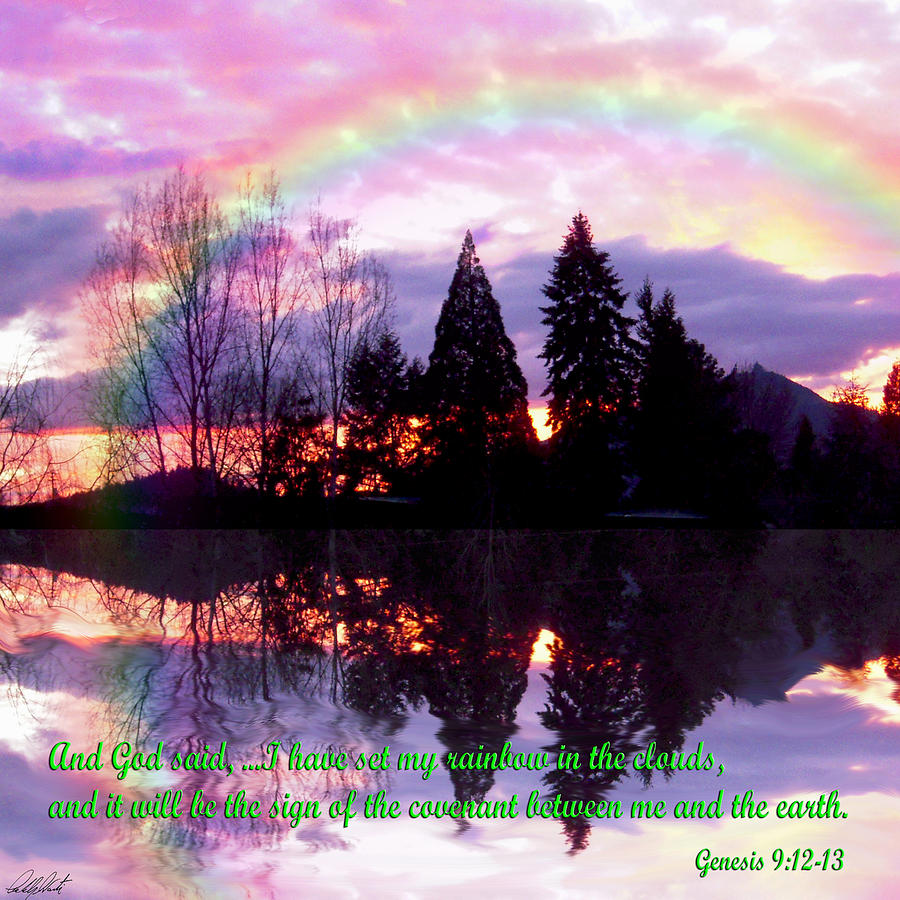 The beauty of a rainbow brings out the child within each of us. The wonder of the beauty of Creation. In the Old Testament of the Bible, in the book of Genesis, 9:12:13 it reads: And God said, "This is the sign of the covenant I am making between me and you and every living creature with you, a covenant for all generations to come: I have set my rainbow in the clouds, and it will be the sign of the covenant between me and the earth." When we hold this verse in mind, we truly gather the wonder of God and all that has been promised to us.. .and all that Creator put here for our delight. Gratitude, joy and love should flow from one's heart when they see a rainbow.. it is much like the voice or song of God painted in colors across the sky.

The Book of Genesis (from the Latin Vulgate, in turn borrowed or transliterated from Greek γένεσις, meaning "origin"; Hebrew: בְּרֵאשִׁית‎, Bərē�īṯ, "In [the] beginning") is the first book of the Hebrew Bible (the Tanakh) and the Christian Old Testament.

The basic narrative expresses the central theme: God creates the world (along with creating the first man and woman) and appoints man as his regent, but man proves disobedient and God destroys his world through the Flood. The new post-Flood world is equally corrupt, but God does not destroy it, instead calling one man, Abraham, to be the seed of its salvation. At God's command Abraham descends from his home into the land of Canaan, given to him by God, where he dwells as a sojourner, as does his son Isaac and his grandson Jacob. Jacob's name is changed to Israel, and through the agency of his son Joseph, the children of Israel descend into Egypt, 70 people in all with their households, and God promises them a future of greatness. Genesis ends with Israel in Egypt, ready for the coming of Moses and the Exodus. The narrative is punctuated by a series of covenants with God, successively narrowing in scope from all mankind (the covenant with Noah) to a special relationship with one people alone (Abraham and his descendants through Isaac and Jacob).[2]
The book's author or authors appear to have structured it around ten "toledot" sections (the "these are the generations of..." phrases), but modern commentators see it in terms of a "primeval history" (chapters 1�11) followed by the cycle of Patriarchal stories (chapters 12�50).[3] For Jews, the theological importance of Genesis centers on the covenants linking God to his Chosen People and the people to the Promised Land. Christianity has interpreted Genesis as the prefiguration of certain cardinal Christian beliefs, primarily the need for salvation (the hope or assurance of all Christians) and the redemptive act of Christ on the Cross as the fulfillment of covenant promises as the Son of God. Tradition credits Moses as the author of Genesis, as well as Exodus, Leviticus, Numbers and most of Deuteronomy, but modern scholars increasingly see them as a product of the 6th and 5th centuries BC.

A rainbow is an optical and meteorological phenomenon that is caused by both reflection and refraction of light in water droplets resulting in a spectrum of light appearing in the sky. It takes the form of a multicoloured arc. Rainbows caused by sunlight always appear in the section of sky directly opposite the sun.
Rainbows can be full circles, however, the average observer sees only an arc, formed by illuminated droplets above the ground,[1] and centred on a line from the sun to the observer's eye.

In a "primary rainbow", the arc shows red on the outer part and violet on the inner side. This rainbow is caused by light being refracted (bent) when entering a droplet of water, then reflected inside on the back of the droplet and refracted again when leaving it.

In a double rainbow, a second arc is seen outside the primary arc, and has the order of its colors reversed, red facing toward the other one, in both rainbows. This second rainbow is caused by light reflecting twice inside water droplets.

The rainbow is not located at a specific distance, but comes from an optical illusion caused by any water droplets viewed from a certain angle relative to a light source. Thus, a rainbow is not an object and cannot be physically approached. Indeed, it is impossible for an observer to see a rainbow from water droplets at any angle other than the customary one of 42 degrees from the direction opposite the light source. Even if an observer sees another observer who seems "under" or "at the end of" a rainbow, the second observer will see a different rainbow�farther off�at the same angle as seen by the first observer.

A rainbow spans a continuous spectrum of colours. Any distinct bands perceived are an artefact of human color vision, and no banding of any type is seen in a black-and-white photo of a rainbow, only a smooth gradation of intensity to a maximum, then fading towards the other side. For colors seen by the human eye, the most commonly cited and remembered sequence is Newton's seven fold red, orange, yellow, green, blue, indigo and violet.
Rainbows can be caused by many forms of airborne water. These include not only rain, but also mist, spray, and airborne dew.

Thanks for the lesson. Science and Scripture.