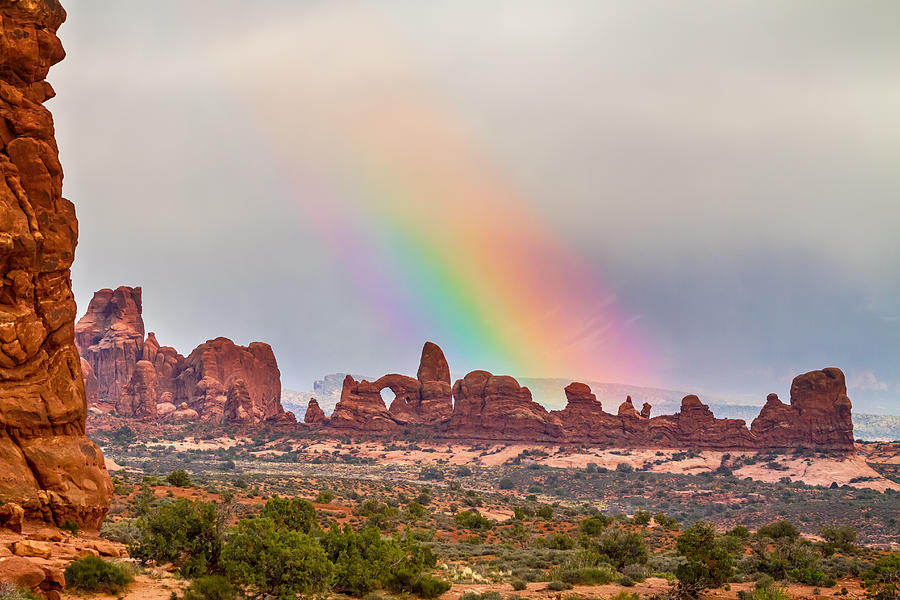 Here is another view and close-up of a rainbow raining down on beautiful Arches National Park in Utah. There were a lot of photographers out on the Sunday. One guy had a huge L lens shooting all over the place... I had to yell at him to turn around to get this before it was gone. He did not even see it. We laughed and he thanked me. It was fun chasing this rainbow around the park to get different views of something incredible happening on the landscape. Put this place on your bucket list, well worth the fun and journey.

Humans have occupied the region since the last ice age 10,000 years ago. Fremont people and Ancient Pueblo People lived in the area up until about 700 years ago. Spanish missionaries encountered Ute and Paiute tribes in the area when they first came through in 1775, but the first European-Americans to attempt settlement in the area were the Mormon Elk Mountain Mission in 1855, who soon abandoned the area. Ranchers, farmers, and prospectors later settled Moab in the neighboring Riverine Valley in the 1880s. Word of the beauty of the surrounding rock formations spread beyond the settlement as a possible tourist destination.

The Arches area was first brought to the attention of the National Park Service by Frank A. Wadleigh, passenger traffic manager of the Denver and Rio Grande Western Railroad. Wadleigh, accompanied by railroad photographer George L. Beam, visited the area in September 1923 at the invitation of Alexander Ringhoffer, a Hungarian-born prospector living in Salt Valley. Ringhoffer had written to the railroad in an effort to interest them in the tourist potential of a scenic area he had discovered the previous year with his two sons and a son-in-law, which he called the "Devil's Garden" (known today as the "Klondike Bluffs"). Wadleigh was impressed by what Ringhoffer showed him, and suggested to Park Service director Stephen T. Mather that the area be made a national monument.