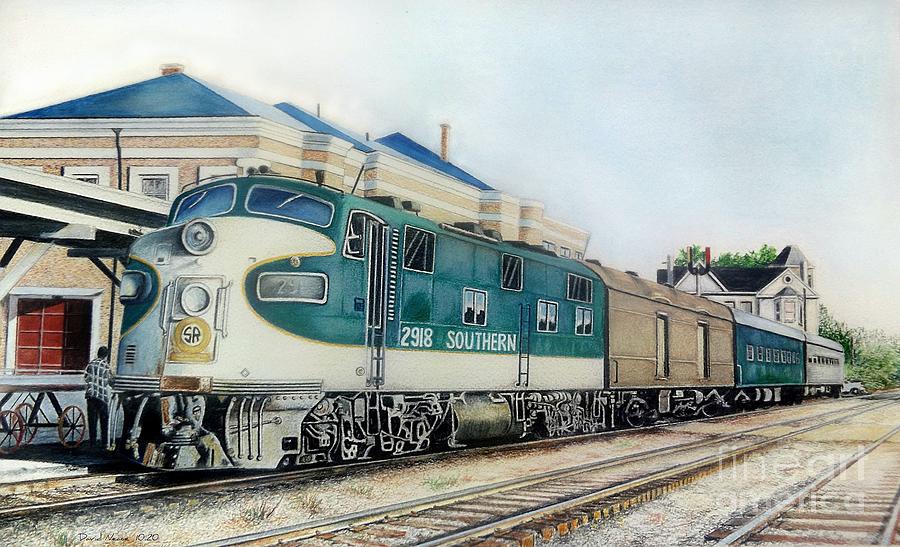 "The Southern's Palm has a history which dates back to November 1913 and even during these earliest days of wooden cars and steam locomotives the train operated with run through equipment owned by the NYC (coming from such cities as Chicago, Detroit, Buffalo, Cleveland, and Cincinnati) and worked in conjunction with the FEC to reach Miami. In the 1920s the train was upgraded with heavyweight cars and sleepers and continued to maintain top level service for Florida travelers. Interestingly, however, during the 1930s and early 1940s when the streamliner era was getting into full swing the Royal Palm maintained its heavyweight status and steam power. Most likely, however, the Southern would have upgraded the train during the early '40s if it was not for the World War II conflict that caused new construction to be suspended.

In any event, the train retained its heavyweight status nearly until 1950. Directly after the war the Southern placed orders with the Budd Company for new equipment to upgrade the Palm as well as new diesel locomotives from the Electro-Motive Division, notably 18 E7As between 1946 and 1949 (and 17 E8As between 1951 and 1953). Additionally, the railroad decided to inaugurate another train over the route, the seasonal New Royal Palm which would operate only during the wintertime (which resulted in the Palm losing its streamlined status and operated heavyweights until the summer season returned). Both trains departed from Cincinnati Union Terminal to much fanfare on December 17, 1949. The Southern spent a great deal of effort marketing the new train with advertisements like "Are you planning a trip? Take the luxurious, winter season, streamlined train New Royal Palm to Atlanta, Chattanooga, Cincinnati, Indianapolis, Chicago, Toledo, Detroit, Columbus, Cleveland, Buffalo, and Toronto."

Stunning Artwork, David, so much detail.....love this! L/F

I like the teal colors on the engine! Great details.

HH Photography of Florida  22 Days Ago

Outstanding artwork, David. So much to see. L/tw/pin

Great drawing in every detail !! l/f

Love this! Your art is amazing!!! lf

Wonderful drawing and so exactly. Great!

Revisiting David Because I Love The Way You Did This! L/F

Fascinating backstory on this beautiful piece of art, David - love the timeless quality of this! L/F

I love your work! Incredible detail. So beautiful!

WOW, DAVID! ...The details of this work are staggering!...beautiful!..LF

This is very nice piece of work! So Unique and very special art. I really love it!! Sincerely Cia

Awesome job David. You have created one amazing train drawing.

One of my favorites !! You got my vote !

Wow, that is a beauty! LF

Your pencil work is amazing in both the detail and subject. I like the history you've provided in the backstory too.

Outstanding colored pencil work David. Your works with them are something else. F/L.

This is a very fine example of your very fine work, David! l/f/t

This image is completely beautiful and evocative with an air of nostalgia that delights. Love/f