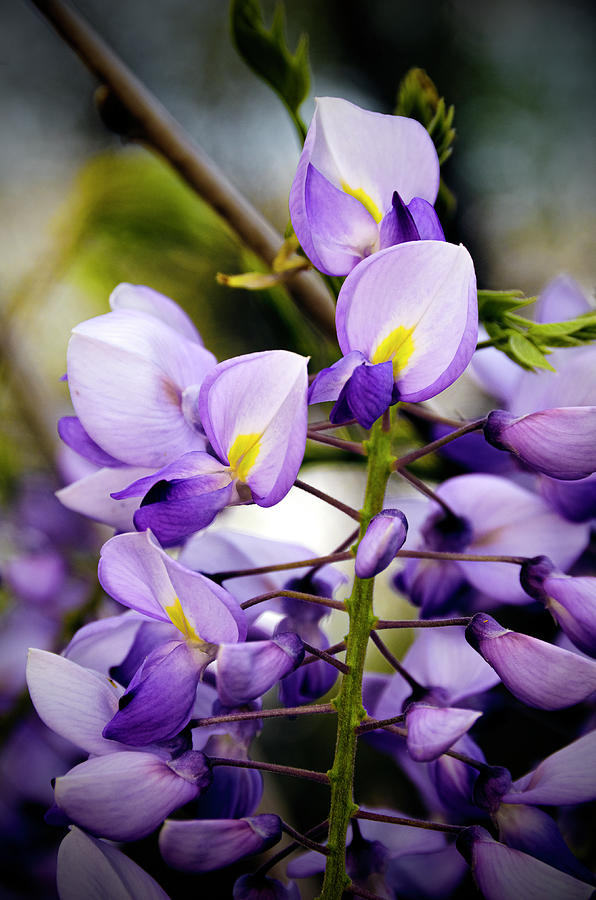 A wisteria vine in Ushijima, Japan, measured 32 feet in circumference and produced more than 80,000 trusses of flowers in a 1920 report. Asian wisteria is also becoming a pest in wildlands of America, where it blooms without any help at all. So why is it that thousands of these vines growing at homes across America stubbornly refuse to bloom?

The answer lies in the history of modern Asia and the limited access to western plant hunters. With a few exceptions, both China and Japan were closed to westerners until the late 18th century. Chinese "Wisteria sinensis" was unknown until 1812, when a small number of English agents entered strictly for trade. In 1830, plant explorers finally introduced the Japanese species, "Wisteria floribunda" to the west.

In these early years only the seeds were exported from China and Japan. It is from these seeds that the first plants were grown in the west, and from that original stock many contemporary plants descend.

Many plants grown from seed can be genetically variable with any number of characteristics resulting in the offspring. Among seed-grown wisteria, some individuals may not flower for 20 years, while the average is about eight to 10 years after germination. Those first exported Asian wisteria seeds were just as variable, and so were their offspring. Before the advent of the modern American nursery, wisteria growing was a cottage industry with very little control of parentage.

The problem with seedlings is you don't know if you have a 20-year bloomer until at least 10 years have passed. This is why so many gardeners find themselves at odds with their uncooperative plants.

The most common solution is to shock the plant into bloom. This old-time process of severing roots to stress out the plant is known to kick off a survival mechanism. Thinking its life is soon to end, it makes a valiant attempt to perpetuate itself by flowering and setting seed before death. While shocking won't kill the tree or vine, it's clearly not healthy either, because it severs vital feeder roots.

Years after the early seedlings in Europe did not produce like their parents, plant hunters returned to the Far East find out why. They concluded many of the heavy, early flowering Asian plants had been started by layering, a method similar to taking a cutting that's used to propagate vines. That new plant will share the exact same heavy blooming genes of its parent.

This time plant collectors sent home-rooted cuttings of the best of the Chinese and Japanese plants. Gleaned from venerable old plants at historic sites, temples and ancient palaces, they were assured early and abundant bloom. These became the basis for the named cultivars that ensure you get high performing plants.

Wisteria sold as merely W. sinensis and W. floribunda may be seedlings which have no guarantees of bloom age. But when W. floribunda is followed by 'Texas Purple' or 'Violacea Plena,' you know it is genetically identical to its heavy blooming predecessor.

The named cultivars may have been propagated from the parent by layering. It may also be a cutting grafted onto a seedling wisteria rootstock. If the grafted scion dies at any time in the life of this plant, it will revert to the seedling rootstock. Suckers produced below the graft may also be this iffy blooming seedling. It is possible to have an old poorly producing wisteria top grafted to produce named varieties after the fact.

Today's wisteria cultivars can be purple or white, Chinese or Japanese. Other well-proven named varieties to look for are: 'Big Johnny,' 'Longissima,' 'Issai Perfect,' 'Purple No. 1,' 'Cooke's Purple' and 'Purple No. 9.'

Asian wisterias are without question the biggest show in town. But if you want to join the fun, be sure you buy well-labeled named varieties from a reputable garden center. It's the only way to guarantee a high-performing cultivar that will flower within your lifetime. Accept no substitutions.

Even a small plant can produce if carefully pruned.
Japanese wisteria flowers may reach 18 inches in length.

(Maureen Gilmer is a horticulturist and host of Weekend Gardening on DIY-Do It Yourself Network. E-mail her at mo@moplants.com. For more information, visit: www.moplants.com or www.DIYNetwork.com. Distributed by Scripps Howard News Service.)

Thank you very much Ann for your wonderful comment and the l/f!!