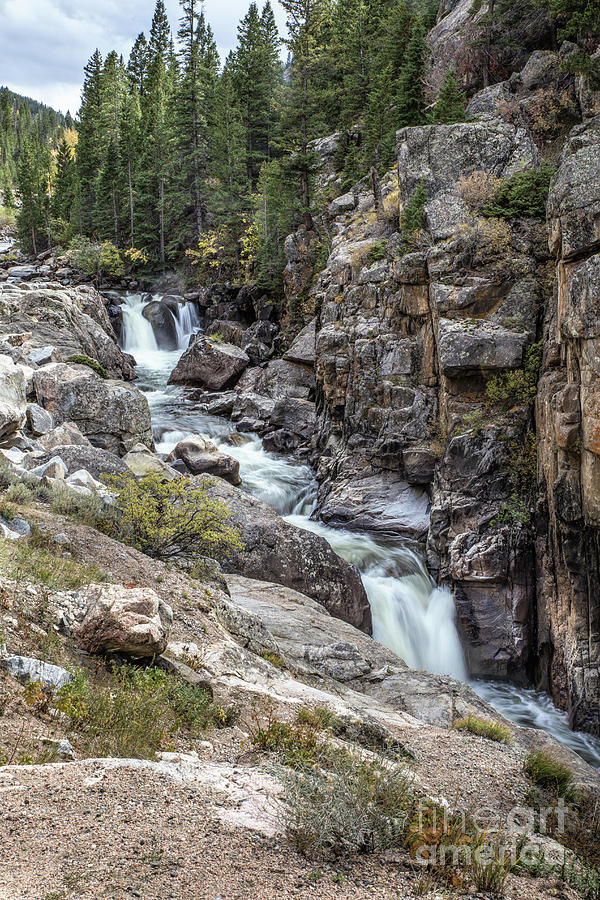 Poudre Falls by Lynn Sprowl.
Poudre Falls is a beautiful set of three cascades that flows down the Cache la Poudre River in Poudre Canyon, Colorado.
This river and waterfall is completely different in spring.
The Cache la Poudre River is located east of the Continental Divide, in the northern Front Range of Colorado. It is affectionately known as the "Poudre" by local residents and long-time visitors to the area. The main and south forks of the Poudre originate in Rocky Mountain National Park, then flow north and east through the Roosevelt National Forest. The river eventually passes through the City of Fort Collins, then joins the south Platte River east of Greeley.
Historical accounts trace the name for the Cache la Poudre River to early French trappers who were caught in a snowstorm and buried their gunpowder in a cache near the mouth of the river. Most settlement of the area started in the 1870's and 1880's with mining and railroad building in northern Colorado. Trees were cut for railroad ties by "tie hackers" and then floated down the Poudre River. The attempted railroad up the Poudre Canyon was never completed, but many of the grades became the foundation for Highway 14. Early mining exploration had only marginal success as well, leaving ghost towns such as old Poudre City to tell the story.
The Poudre River has attracted rafters and kayakers since the 1950's. Rapids on the river are classified from Class I to VI under the International Whitewater Rating System and vary greatly according to water levels. The rafting season generally occurs from May through August.

I'd like to go back this spring....it's completely different there. Thank you, Veikko!

Beautiful landscape!!! What an amazing capture!!! Love the prospective!

Thank you so very much, Seaux-N-Soileau. I love it there.