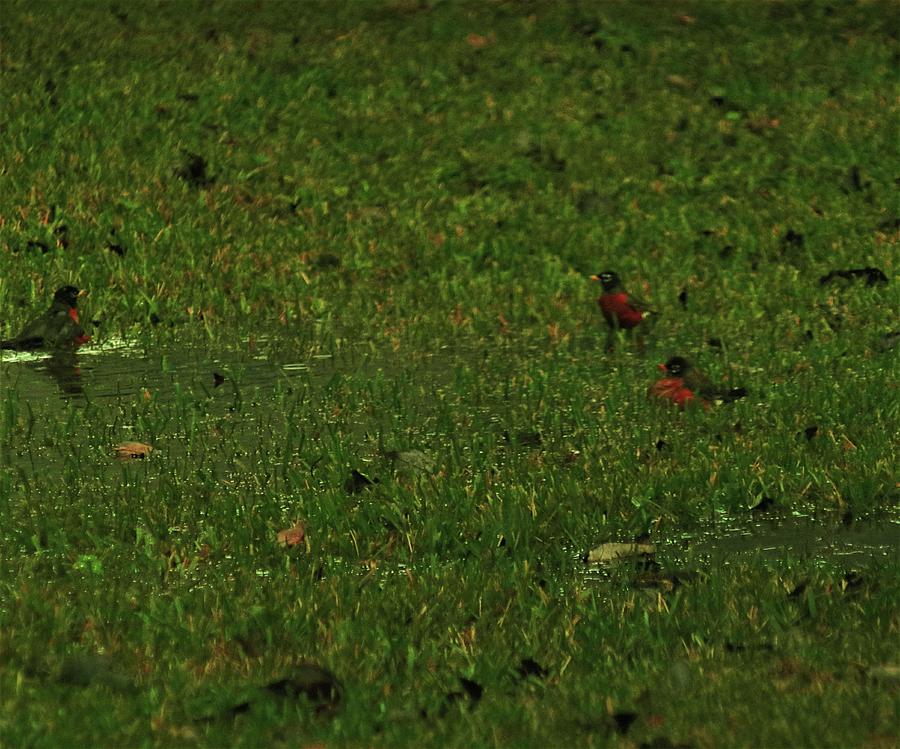 The American robin is active mostly during the day and assembles in large flocks at night. Its diet consists of invertebrates (such as beetle grubs, earthworms, and caterpillars), fruits, and berries. It is one of the earliest bird species to lay its eggs, beginning to breed shortly after returning to its summer range from its winter range. The robin's nest consists of long coarse grass, twigs, paper, and feathers, and is smeared with mud and often cushioned with grass or other soft materials. It is among the earliest birds to sing at dawn, and its song consists of several discrete units that are repeated.
The adult robin's main predators are hawks, domestic cats, and snakes. When feeding in flocks, it can be vigilant, watching other birds for reactions to predators. Brown-headed cowbirds (Molothrus ater) lay their eggs in robin nests (see brood parasite), but the robins usually reject the egg.
This species was first described in 1766 by Carl Linnaeus in the twelfth edition of his Systema Naturae as Turdus migratorius. The binomial name derives from two Latin words: turdus, "thrush", and migratorius from migrare "to migrate". The term robin for this species has been recorded since at least 1703. There are about 65 species of medium to large thrushes in the genus Turdus, characterized by rounded heads, longish pointed wings, and usually melodious songs.

During an irrigation water break in my backyard in Port Orange Florida, a school of about a dozen robins decided the pool of water that came from the water a great place to have a little fun, splashing in the water while others looked. I was happy to oblige them a place to play!!!

Congratulations! Your fantastic art has been featured on the M IS FOR MOISTURE themed week, MARCH 29, 2021- APRIL 5. 2021! You are invited to add your wonderful art in the Features Archive Discussion in the ABC GROUP.

Thank you very much Pamela for the feature...it is greatly appreciated

Thank you very much Bob for the feature in the New FAA Uploads group.....it is greatly appreciated

I love this Christopher such a well-done image of these beautiful birds. L/F/P

The Amazing Photography with Beauty from all angles generating Divinity + L f Just to add that even grass/leaves as seen are used after specific drying process to create Eco-Friendly-Organic Art along with other Dried & sturdy Natural ingredients(Before Perishing) Even canvas selected as waste Bark of Palm Tree-Trunk-outer layers which are thrown out by tree after a specific time.... Message from Eco- Art ....Nurture Nature Then ONLY Nature will nurture Al;l of Us in the present Scenario. Christopher By Mistake i have added an image having less than 1000 views please delete the same Thanks....... feel happy to be member of the amazing Group

Thank you very much Basant for your kind words....and your contrition for the group....Just so you know I actually removed you from the group because it is apparent that at the moment you do not have an image that would meet the requirement for the group.....please do not take it personal and I look forward tot he moment that you do have an image with 1000 Views

Wonderful capture, I love all the life here

So great to see them taking a bath, isn't it?! Sweet capture! l/f

Thanks Judi....a positive that came from a broken water pipe....lol