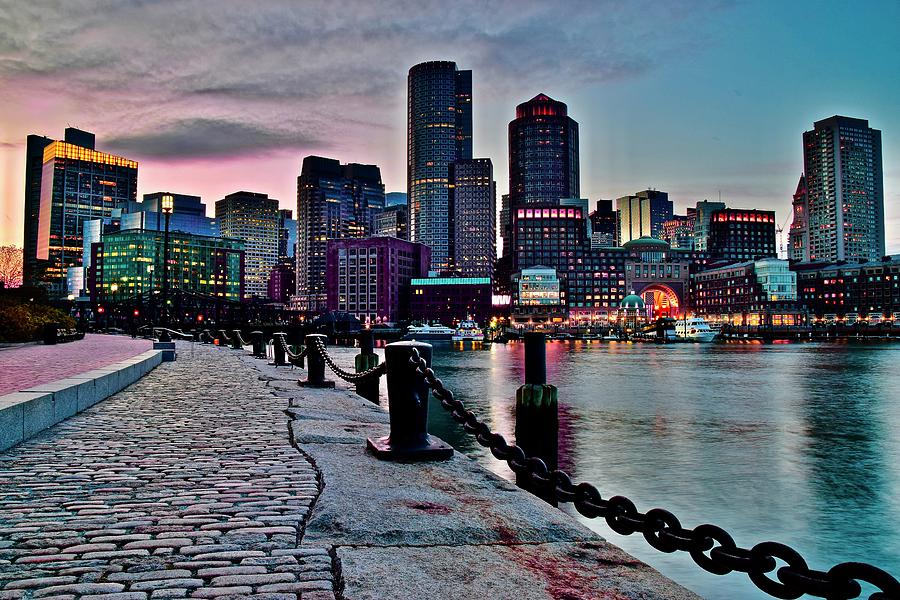 The downtown Boston city skyline and overall cityscape is best viewed across the harbor for any photographic opportunity including panoramic images day or night. This urban metropolis is one of the oldest cities in the United States.

Boston Massachusetts is located on the eastern seaboard and is built on the Boston Harbor. It is most famously known for the Self titled Boston Tea Party. It is also well known for the Self titled Boston Marathon. Bostonians are what locals refer to themselves as and Bean town is often a reference to The Boston Tea Party. There is a museum to commemorate the historical actions of some 200 plus years ago.

The city also takes pride in its sports teams which include the Near unbeatable Patriots. The once unbeatable Celtics. The Bruins and the one time close but not quite Red Sox who play in the second oldest stadium in major league baseball, Fenway Park, which features the famous green monster!

The city also boasts a bar established in 1895 for which a 1980s sitcom was titled, CHEERS, was the hit of prime time tv for years! However if one were to watch an old episode of the show and compare the city skyline with the current skyscraper ridden town found on the waterfront, there would be virtually nothing to recognize. Boston has grown immensely over the years since Cheers began its 12 year run, but despite so many high-rises being crammed into such a small area, the city has managed to keep Christopher Columbus Park alive and well at the edge of town.

If you like this image please check out my entire Boston gallery for a wide variety of day, night, color and black and white images in regular format as well as panorama.

CONGRATULATIONS! It is my great pleasure to FEATURE your artwork on the homepage of the group No Place Like Home, 8/15/2020! You are invited to post it in the Group's Features Discussion thread for posterity or any other thread that fits! l/f

Congratulations your beautiful artwork is being featured in The World We See:-)

Big Surprise for you today! Your piece of beautiful artwork that you have submitted to our Wisconsin Flowers and Scenery group has been chosen by its administrator to be featured on our Homepage of our family of friends and fine artists within our group, which is constantly growing. Congratulations are in order for you for being chosen to appear in this prestigious spot within the Homepage of the WFS group. Thanks much for sharing the beauty of your artwork with other artists and potential buyers.

Congratulations! Your fantastic photographic art has been chosen as a Camera Art Group feature! You are invited to archive your work in the feature.

This is wonderful work, I love it

Yet another gorgeous skyline! l/f/t

A lovely and beautiful capture.

What an awesome shot!

Great perspective composition with nice use of leading line and colors. L

Really nice image Bob. Very much like the composition of the path leading to the city. Aloha.