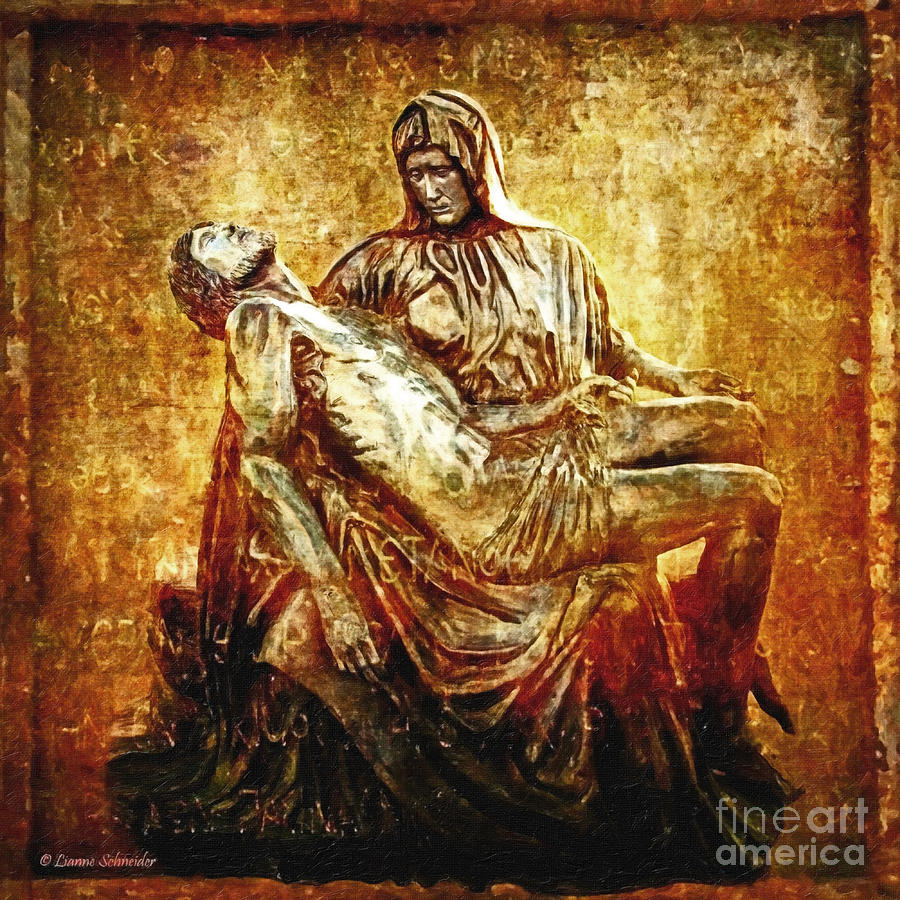 The 13th in a series of 14 images -
Photographic art based on a series of images I took myself of statues around the base of the 190 foot Groom Cross in Groom, Texas.

These images - 14 in all - were in fulfillment of a commission of 40x40 prints for a Catholic Church in Louisiana. The images in the series represent the 14 Stations of the Cross or Via Dolorosa (Way of Sorrows) - vignettes along Jesus Christ's walk to Cavalry and his Crucifixion. Similar images in plaster, bronze, pewter, painted on wood panels or sculpted can be found in Christian churches throughout the world and in many communities, people from all denominations participate in "Living Stations" or "Passion plays" based on these same moments.

Similar religious art still lives on in some places. In the small town of Groom, Texas, along Interstate 40, stands a 190 foot cross that can be seen across the Texas and Oklahoma panhandles from more than 20 miles away. Constructed by Steven Thomas over a period of 8 months, the huge metal cross stands today on private property near the highway. In the years following its construction, sculptor, Mickey Wells, created a series of life size bronze sculptures to add to the site. Twelve of these - representing 12 of the 14 Stations of the Cross - are placed in a circle around the central cross. Also called "The Way of Sorrows" or "Via Dolorosa," the stations depict the final hours in the life of Jesus - from his condemnation to his being laid in the tomb. There are many sensitive, enlightened people who are repelled by what seems to be a glorification of an especially brutal and gruesome death. My feeling is that the recreation of this Way of Sorrows is an attempt to understand and find meaning in suffering, particularly when it is undeserved. We ask this question every day when we are faced by the brutality human beings visit on one another and on other living creatures every single day. Why? Why do we visit such violence on one another?

But looking at my rather poor photos, it occurred to me that I might preserve my own impressions of these sculptures and at the same time pay tribute to the nearly 1000 years of religious art that dominated the Western world throughout the Middle Ages right up until the post-Reformation period. Much of this kind of art can still be seen in churches and cathedrals all over the world as well as in the great museums that house the masterpieces of the Medieval and Renaissance periods. I post them here as ART. There is certainly no intention on my part to offend those of other religious traditions or non-religious traditions whose own artistic expressions I greatly admire. I've chosen to create my representation of four of the 14 stations along the Via Dolorosa in a style that I hope is reminiscent of the Middle Ages - using my own images of the sculptures found around the base of the Groom cross.

Copyright Lianne Schneider 2013
This is a rights managed image available for licensing at http://licensing.pixels.com/profiles/lianne-schneider.html

Wonderful work! Congratulations on your sale!

Lianne, Congratulations on your recent sale !

My most sincere thanks to the buyer from South Croyden, Surrey, England for purchasing 13 of this set of 14 Stations of the Cross. I can't begin to tell you how much that means to me. I hope you didn't inadvertently or unintentionally miss the 6th image in this series but I pray that each of these gives you comfort and hope as you contemplate each one. I thank you from the bottom of my heart.

A true masterpiece my friend ..congrats !! :)

Congrats on the sale of your amazing artwork, Lianne!!! Many blessings. :-) L/F

Very happy for you about this wonderful sale, Lianne!!! L/F!!!

A very heartfelt thank you Frank for featuring this painting in CATHOLIC ART GALLERY. I am very humbled and honored by that.

Lianne -- CONGRATULATIONS!! Your beautiful artwork has been Featured by the - CATHOLIC ART GALLERY - Fine Art Group on FineArtAmerica! Thank you for sharing it !!

Jo Ann and Sharon, my heartfelt thanks for featuring this image in your fabulous groups - BOOK COVERS 1 PER DAY and SIGNATURE STYLE ART. I'm so very honored.

Thank you so much Tina and Chad for featuring this image in your wonderful groups ARTISTS BEST FIVE ARTWORKS and TODAY'S BEST ART. That means a great deal to me.

Thank you so much Nadine and Bob for featuring this image in this week's ARTIST NEWS - I'm tremendously honored and grateful.

My most humble thanks Geordie for featuring this work - a labor of love for me - in your wonderful group CHRISTIAN THEME ARTWORK GROUP. I'm very very grateful and so honored.

Barbara, Kiki Art, Jouko and Dan - I am so very grateful and so very honored that you have chosen to feature this work in your amazing groups - MOTIVATION MEDITATION INSPIRATION, DIGITAL ART AND FABULOUS FRACTALS, ART FROM THE PAST and PREMIUM FAA ARTISTS. Thank you so very much.

CONGRATULATIONS your outstanding artwork is FEATURED in the highly viewed Art Group: MOTIVATION MEDITATION INSPIRATION! From the hundreds of pieces of artwork received daily to review and choose from, your work has been chosen because of it's excellence!

Lianne, this and your others of Jesus..are so magnificent. So Sad! but what a wonderful work... Sherri FVL

Thank you so very much Sherri - this series was a labor of love though I've hidden about half of them because I wasn't quite satisfied with them. Will work on them and return them to the folder. Appreciate you support so much.

Photography is all about capturing moments in time. Congrats on capturing this Powerful moment!!

My deepest thanks to each of you who have visited and left such touching and supportive comments. I certainly didn't mean to neglect you or forget to express my gratitude. I hope I've done so on one of your own works of art in recent days but if I haven't I certainly will soon.

F/V The sculptue is very well done. How nice to learn the sculptures are in Texas. I hope by now your personal suffering is over. Your processing has made these images appear to be anceint hammered metal sheet sculptures on plaques.

Lianne, I can't find enough words for your Brilliant work! Congrats on your series and sales :):):)

I love your processing choices with this series. v

This is really impressive... wonderfully done, Lianne. Congrats on your sale!

Thank you so much Jutta - I really appreciate that.

Lianne~~CONGRATULATIONS on your sale!!! V!

Thank you so very much Will - I'm honored that you would visit and leave such a lovely note.

Thank you so much my friend - that's so kind of you to say!!

Thank you so much, Lianne for your sale and wonderful work.

My dear Rosa - thank you so much for your lovely heart and that beautiful comment!!

Thank you so much Michael.

Another outstanding work of art from Lianne, congratulations on your sale and your talent!

What a perfectly lovely thing to say Barbara - thank you so much.

congrats on your sale.

Thanks so much Kim - I really appreciate that.

you are so incredibly kind and supportive Ana - I take that as high praise indeed and thank you so much for that lovely comment.

Ah sweet friend thank you so very much! I've a lot of catching up to do with you!!

Beautiful!! Congratulations on your sale Lianne :)

Lovely of you Lori - thank you!

Astounding!!!! Congrats on your sale

Thanks so very much Jeff - I appreciate that.

Thank you so much Robert - that lovely compliment means a great deal to me.

Thank you so much Anne for the feature in Digital Realism. I'm honored.