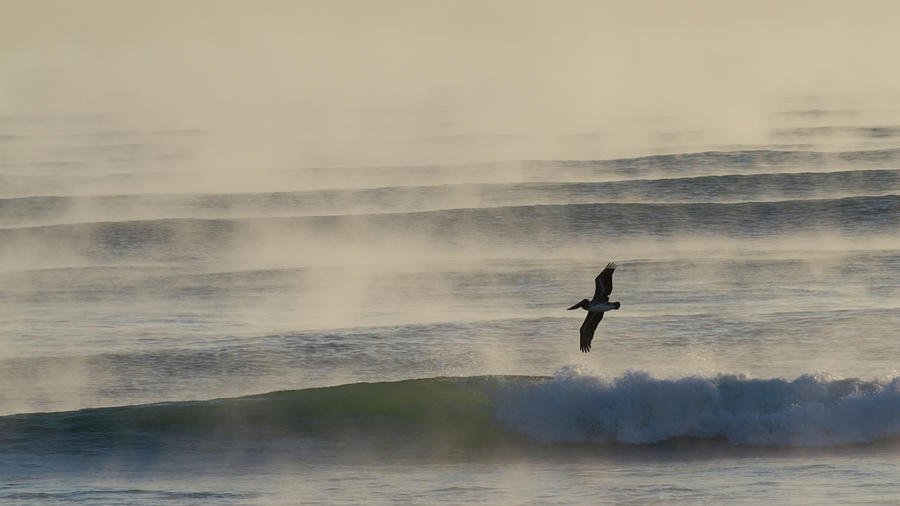 A brown pelican flying low over breaking waves with the mist of sea smoke rising from the ocean.

This image has been featured in the following groups:
500 Views - 1 Image a day,
Birds in Flight,
Ocean Photography and Art,
Peace and Simplicity Outdoors
& Seashells and the Seashore

Occasionally weather conditions are such along the coast that a phenomenon called 'sea smoke' occurs. This is a mist that rises off the water, usually when the air is very cold and the water is much warmer. These photos were taken on an early January morning when the dew point was about 32 degrees (F), the air temperature was only a degree or two above that, the Atlantic coastal water temperature was about 60 degrees and the winds were calm.

Congratulations on your feature in the "Seashells and the Seashore" group. Great capture!

Wonderful image of the pelican flying low over the waves.Paul. Like your clever title.

Wonderful capture on so many levels! Beautifully done, Paul! Fav'd

Congratulations! Your outstanding artwork has been chosen as a FEATURE in the “Peace and Simplicity Outdoors” group on Fine Art America.

Thank you Allan for featuring my image.

Congratulations on your feature in our 'Birds in Flight' group!

Love the pelican flying through the sea smoke! l/f/t