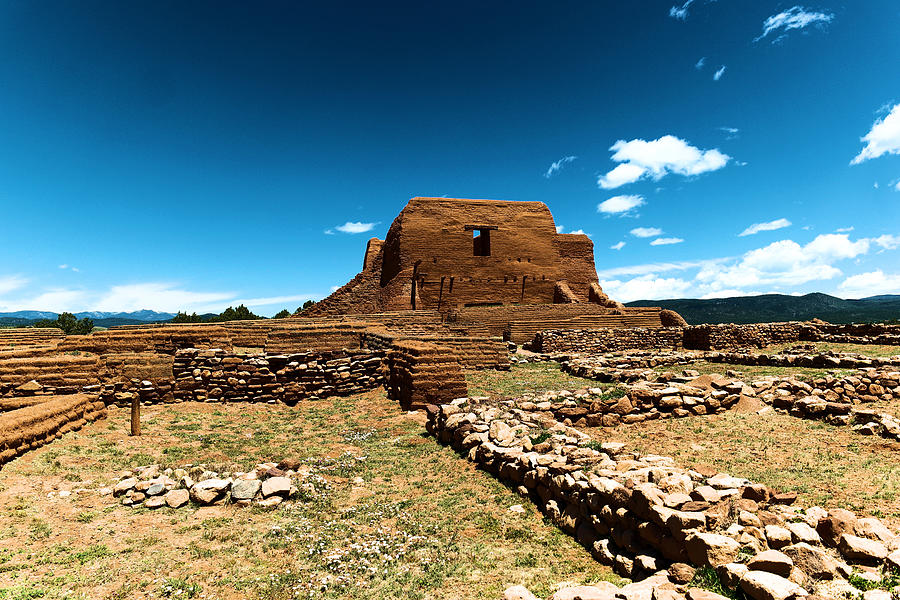 Pecos National Historical Park is composed of several noncontiguous units. The main unit of the park preserves the ruins of Pecos (Ciquique) Pueblo. The first Pecos pueblo was one of two dozen rock-and-mud villages built in the valley around AD 1100 in the prehistoric Pueblo II Era. Within 350 years the Pueblo IV Era Pecos village had grown to house more than 2,000 people in its five-storied complex.[4] The main unit also protects the remains of Mission Nuestra Se�ora de los �ngeles de Porci�ncula de los Pecos, a Spanish mission near the pueblo built in the early 17th century. A 1.25-mile (2 km) self-guiding trail begins at the nearby visitor center and winds through the ruins of Pecos Pueblo and the mission church. The Pecos Pueblo (Ciquique) was declared a National Historic Landmark on October 9, 1960.[3][5]

In 1960, the National Park Service's statement of significance read:

This sizeable Pueblo community on the edge of the Plains was occupied for over 400 years. It was important in the history of the Spanish arrival in New Mexico, and the Spanish built and occupied a mission at the site for about 200 of those years. The site was abandoned in the 19th century by its last Pueblo residents.[3]

Pecos (Ciquique) was visited by expeditionaries with Francisco V�squez de Coronado in 1540. The Spanish mission church, Mission Nuestra Se�ora de los �ngeles de Porci�ncula de los Pecos, was built there in 1619. A traditional kiva was built in front of the church during the Pueblo Revolt in 1680 as a rejection of the Christian religion brought by Spanish colonists. However, when the Spanish returned in 1692, the Pecos community stayed on friendly terms with them. The site was abandoned in 1838, after the Pecos population suffered from marauding Comanches. The surviving remnant of the Pecos population moved to the Jemez Pueblo.[6]

Other park units protect the Glorieta Pass Battlefield, site of the American Civil War Battle of Glorieta Pass, as well as a stretch of wagon ruts along the old Santa Fe Trail. Both the Glorieta and Santa Fe units are currently closed to public use but can be visited on scheduled, ranger-guided tours.

Another part of the park is the Forked Lightning Ranch home designed by John Gaw Meem for Tex Austin and later occupied by Greer Garson.

The Pecos people enjoyed a rich culture with inventive architecture and beautiful crafts. They also possessed an elaborate religious life, evidenced by many ceremonial kivas. Farming was a main part of their diet and staple crops included the usual beans, corn, and squash. Their location, power and ability to supply goods made the Pecos a major trade center in the eastern part of the Puebloan territory.

Thanks Buyer rom Anthem AZ I hope you enjoy your pillow!