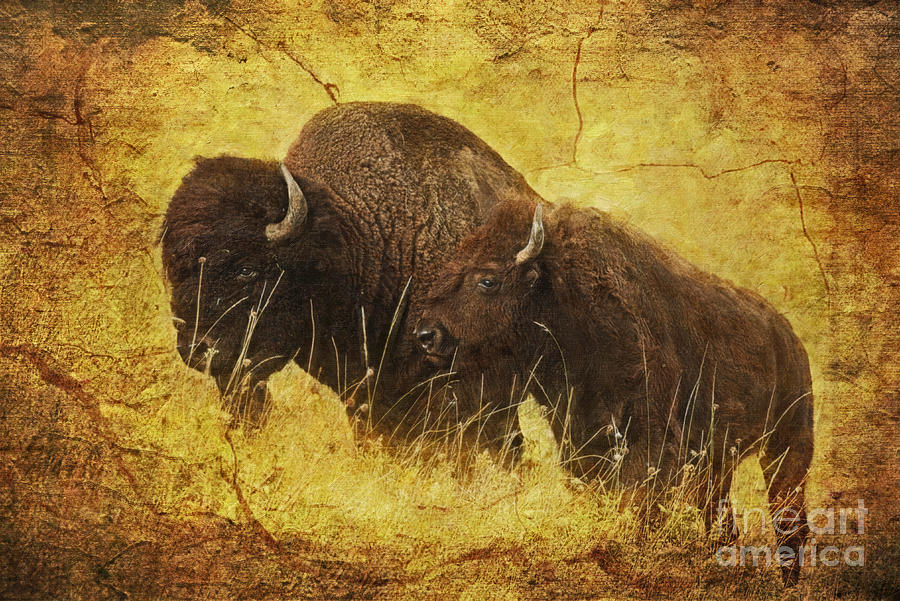 Digital impressionist hand-painting of two of the small herd of American bison restored to the Montana plains from pure stock from the Wind Cave National Park, SD herd.

"What is life? It is the flash of a firefly in the night. It is the breath of a buffalo in the wintertime. It is the little shadow which runs across the grass and loses itself in the sunset." Crowfoot, Blackfoot warrior

The American bison, commonly referred to as buffalo, is a North American species of bison that once literally covered the plains and grasslands of the continent. Massive herds were hunted to near extinction by both commercial hunting and slaughter during the 19th century and also by the spread of certain bovine diseases from domestic cattle. Buffalo is an inaccurate name for this massive animal which bears little resemblance to true buffalo - the Asian water buffalo and the African buffalo.

"North American bison were reduced to a few hundred by the mid-1880s. They were hunted for their skins, with the rest of the animal left behind to decay on the ground. After the animals rotted, their bones were collected and shipped back east in large quantities. The US Army sanctioned and actively endorsed the wholesale slaughter of bison herds. The US federal government promoted bison hunting for various reasons, to allow ranchers to range their cattle without competition from other bovines, and to weaken the North American Indian population by removing their main food source and to pressure them onto the reservations. Without the bison, native people of the plains were forced either to leave the land or starve to death." (Wikipedia)

There has been resurgence in the numbers of bison in the United States thanks to preserves in a few northwestern national and state parks. The Antelope Island bison herd, an isolated bison herd on Utah's Antelope Island has also been used to improve the genetic diversity of American bison. The current American bison population has been growing rapidly, and is estimated at 350,000 - relatively few compared to an estimated 60 to 100 million in the mid-19th century. Most current herds however, are genetically polluted or partly crossbred with cattle. Today there are only four genetically unmixed, free roaming, public bison herds and only one that is also free of brucellosis: it roams Wind Cave National Park. A founder population of 16 animals from the Wind Cave bison herd was re-established in Montana in 2005 by the American Prairie Foundation. The herd now numbers near 100 and roams a 14,000-acre grassland expanse on American Prairie Reserve.

I am a western New York based artist with a passion for the sea and a deep love for the natural world around me. Having somewhat restricted mobility, my paintings are sometimes based on images in the public domain or on elements from classic art work. Thank you for your interest in my artwork. If you would like to see more, my full portfolio can be found at http://lianne-schneider.artistwebsites.com If you enjoy my art works, please feel free to share this link with friends or share on your social networks by pushing the Pinterest, FB, Google+, Twitter or SU Buttons! Thank you!

You can purchase quality traditional style fine art prints of digital paintings, giclee canvas prints, acrylic and metallic prints by Lianne Schneider. Beautiful and stylish decor for any wall in your home, office or lobby. Detailed landscapes, seascapes, still lifes, flowers and more...all with the look and feel of classic oil paintings. The FAA-Watermark will NOT appear on any final product!

This is a hand-painted digital oil derivative work based primarily on a work in the public domain. While my adaptations and interpretations are copyright protected, the underlying artwork remains in the public domain available to other artists to reproduce or interpret.

Please contact the artist, Lianne Schneider, directly if you purchase this image as a giclee print on canvas, framed or unframed. A signed and numbered Certificate of Authenticity is available for each canvas indicating title of the work, my name, date of creation, a thumbnail of the painting, the origin of original work if the painting is a derivative, the number of your print in the limited printing and a guarantee that the work will no longer be available to the public in a canvas format once 25 canvas prints are sold.

Laura, I'm so grateful to you for featuring this painting in your group DIGITAL MAGIC. It's a significant honor and I'm quite thrilled.

My apologies to William for overlooking the fact that you also featured this image in your fabulous group BEST IMAGE PROMOTION. Thank you so much for that honor.

I fully intend to visit each of you and each group that has left such lovely comments when I am able after my bone marrow transplant (scheduled for next week). In the meantime, special thanks to Stefon, Bob/Nadine (x2) and Joe for featuring this painting in your fine groups - APPRECIATING WORKS FROM ALL MEDIUMS, ALL FINE ART AMERICA ARTWORK, PIN ME 1 DAILY and 4000 AND UP. I'm more grateful and honored than I can say.

I realize that my voice (and a loud one) and my clapping hands have not been seen on your official pages because I have been commenting on FB. I want to plant my flag here and send up a big cheer for this wonderful painting, one of my very favorites. F/L+++

A huge thank you to everyone who has stopped by in recent days to leave such lovely comments - can't tell you how much I appreciate it. Hopefully, I have paid you each a visit to thank you in person with a comment on your work but if not yet, then soon!

Mariola and William thank you so very much for featuring this image in your groups - WILDLIFE ONE A DAY, 500 VIEWS - 1 IMAGE A DAY and ART WITH FLAIR. It's such an honor and I'm just so very pleased.

Darren thank you so very much for featuring this image in PHOTOGRAPHY AND TEXTURES MAKE FINE ART. I'm always incredibly honored by that selection.

Magnificent capture and special effects, Lianne!!! It's as if the cave drawing have come to life in this awesome composition! L/F/T/G+/SU/P

Such a gorgeous work Lianne! I love the wonderful golden tones, the rich textures and these magnificent animals!! Just wonderful :)) l/f/t/g/pinned!!

Amazing work Lianne...love what you did with the background...LF t g+

Lianne, your ability to give animals in the wild such a...nurturing look to them is really amazing...and love what you've done with the texture. v/f

The Art of Marilyn Ridoutt-Greene

Wow! Just awesome work all around, Lianne...I really like this a lot! L/F

Lianne,I'm so transfixed by these magnificent furry creatures in a field of gold! Would not be wise to venture too near,yet I want to stroke their beautiful woolly coats! Great strength and beauty here perfectly depicted as always by you! L/F

Sharon thank you so very much for featuring this image in SIGNATURE STYLE ART. It's always a thrill and an honor.

Another stunning digital work of art that really brings out the beauty of these wonderful creatures!! v,f,t,g+,p

Thank you Nadine and Bob for featuring this in ARTIST NEWS - it's always such a wonderful honor.

My most heartfelt thanks to Taikan, Jeff, Chuck, Tina, Pamela and Anne for featuring this work in your amazing groups - THE BEST 30000 ARTWORKS, PLEASING THE EYE, AAA IMAGES, ARTISTS BEST FIVE ARTWORKS, 3 A DAY WAITING ROOM ART and DIGITAL REALISM. I'm so very honored and happy!.

Excellent work Lianne. Can feel the power of these creatures. l/f

My deepest thanks to Jeff, Chuck and Tina for featuring this image in PLEASING THE EYE, AAA IMAGES and ARTISTS BEST FIVE ARTWORKS. Such an honor and I'm just thrilled.